With the guest experience becoming more important, today's airports need to think of themselves as much more than simple transit zones. Future Airport speaks to Alex Schregardus, founder of visitorM, about improving the passenger's stay through smart new technology and real-time customer feedback.

It's early in the morning, and you're sitting in an airport cafe sipping a black coffee and trying to concentrate on emails. The sound of the public address system echoes through the departure lounge, but you manage to block it out and focus on your work before your flight starts boarding. Then, out of the corner of your eye, you spot someone walking over, wearing a dark suit and holding an official-looking clipboard. You groan. They reach your table, stop suddenly and ask you to fill in a survey. Is now really convenient, you think? So early in the morning? And with someone standing right next to you, are you really going to answer honestly?

Today's airports collect a huge amount of data on passengers. When you walk through security, everything is being monitored to reduce queue times and make the journey as smooth as possible. Flight delays are monitored, baggage belts are assessed and other operational metrics are under constant inspection, but when it comes to passenger feedback on basic issues around customer experience, airports are often left wanting. As well as being inconvenient, the traditional method of regular passenger surveys rarely improves customer satisfaction in a fast-moving environment.

"If you're trying to make that link with operational excellence the traditional methods won't give you what you need," says Alex Schregardus, founder of visitorM. "You get a report that is collated and presented to you a couple of weeks after. When you find out you have a problem in a particular area, you're already weeks down the line, and the opportunity to make quick, tactical changes there and then has passed.

"What airports don't have is actual insight into their passengers. They have so many metrics in terms of their systems and operations, but having that real-time view of passengers and how they are experiencing that operational excellence is a real challenge."

Zone of the enders

Part of the reason airports have been slow at improving this side of their business is the narrow conception many seem to have about what they actually do. Rather than see themselves as facilitating end-to-end travel, like airlines, airports tend to function as simple transit zones, getting people from A to B.

"It's about organisational culture," Schregardus says. "Airports need to buy into the fact that they are much more than transit points. They need to understand that they are delivering experiences far beyond getting people through security as fast as possible or having their bags delivered on time. It's about the experience that passengers have in the time between the security queues."

Two particular examples can help elucidate this. If something goes wrong in a washroom and cleanliness standards drop, how will an airport know to send a cleaning crew down immediately without quick feedback mechanisms?

"It's not a very glamorous area, but if things are wrong there, it does definitely set the tone for a lot of future experiences and interactions you'll have with the airport," Schregardus says. "Without passengers letting you know, it's very hard for operational teams to actually do something about it other than through their regularly scheduled operational stuff."

Another area where quick feedback can make all the difference is with an airport's outside partners. Companies running security services can, for example, have a major impact on the airport, and the perception of the facility and how it operates as a business. For Schregardus, having real-time information here is a must.

"You need to be on top of it all the time," he says. "If you're getting unbiased passenger feedback hour by hour on issues being managed by your partners, it can make all the difference. Maybe the signage leading into security is confusing or the staff aren't behaving as professionally as they should; these kinds of things can have a big impact on the experience, and customers should be able to report on them easily and at their own convenience."

Schregardus's company, visitorM, was founded to help solve these kinds of problems, and he believes the solution is to harness new technology offering simple customer experience systems that are convenient, even exciting, for passengers to use.

"One of our tools is a micro survey that we place at the point of experience and can offer fast solutions to a range of problems," he says. "We place passenger feedback screens at areas where we want to catch feedback, such as at security lanes and screens in toilet areas - any places where we can find out about the passenger experience in real time and get a granular insight on an hourly basis. By doing this, we tend to get an overall view of the health of all passengers across the airport.

"We've found that if you use it as a tool to drive operational excellence, it can really help you deliver better experiences and be more intelligent about what you're doing. It's not like traditional methods that create friction and make it difficult for passengers to give you feedback; it can be used there and then, without installing any apps or talking to someone standing right in front of you.

"It's about removing the hurdles so that passengers can provide feedback at a point in time that is convenient for them. That way, they won't need to jump on social media to get their point heard."

With airlines and airports beginning to grasp the importance of the guest experience, the danger of ignoring new technology like this should be obvious. Last year, airport operators invested a staggering $7 billion on IT, introducing automated check-in systems and bagdrop zones, and new apps to help navigate around the airport. Passenger feedback, Schregardus argues, is no different.

"Airport and airlines are definitely starting to see what a great passenger experience can do for them as a business," he says. "They know that treating their passengers like guests and doing as much as possible to deliver world-class experiences that offer convenience and fun is important.

"Just look at Emirates. It came out of nowhere and is now delivering exceptional passenger experiences, which is creating real friction in the market. Then you have the likes of Changi Airport in Singapore: that's become a destination in itself. It's invested heavily in facilities, and the passenger experience is incredible. Compared with the competition, it's a much nicer place to transit through."

"I think passengers do have a big choice in hub and local airports," he says. "In a significant number of cases, they can alter their travel arrangements if they are getting poor experiences. Or if not, they can spend much less on retail and food. If you are a place where the experience is poor, people want to spend as little time there as possible.

"So it's crucial that you know what is going on in terms of the experience in a very timely way. You need to know when things are suboptimal so you can improve it for the next passenger coming along." 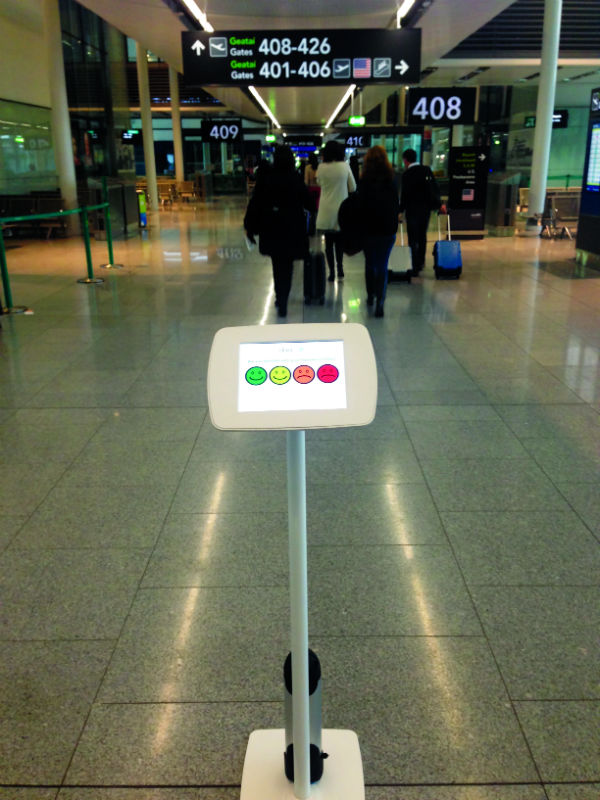 The touch-screen feedback systems offered by visitorM allow feedback to be harvested from passengers quickly and easily at key locations.