Regularly garlanded as one of the world's greatest airports with its unwavering focus on the customer experience and support for the local economy, Tampa International Airport has firmly seated itself at the forefront of international and domestic travel. With almost $1-billion-worth of expansion and construction projects set to revolutionise the site and generate value for the surrounding Tampa Bay area, this looks set to continue for years to come.

Tampa International Airport is the premier gateway to the treasures of Florida's west coast. Serving a metropolitan area of almost three million people and annually welcoming more than 19 million passengers, the airport provides access to the beaches of St Petersburg and Clearwater - annually ranked the best beaches in the country - Florida's ample tourism hotspots and one of the fastest-growing economies in the US.

Globally recognised as one of the world's best airports, Tampa International Airport has long prided itself for being laser-focused on the passenger experience and making every interaction personal. Most recently, Phoenix Marketing International polled 170,000 passengers through AirportXP, and Tampa International Airport came top for customer satisfaction. Other accolades include: twice being named by Travel + Leisure as the second-best US airport based on reader polls, being the only US airport listed among the world's ten most-loved airports by CNN Travel and being ranked second in passenger satisfaction for US airports by market research company JD Power.

Building on a long-standing track record of success, Tampa International Airport is implementing the largest construction project in its history. Thanks to an investment of nearly $1 billion, the airport's main terminal is being expanded by 50,000ft2 and a state-of-the-art rental car facility is being constructed, while the two will be connected by a brand new, 1.4-mile people mover.

At the same time, the airport is adding local flavour and supporting Tampa Bay-area businesses via a complete overhaul of the airport's concessions programme. The project has created almost 6,000 jobs in the local economy, and it is estimated the new developments in the airport will generate $1.3 billion in gross sales over the next ten years - much of which will remain in the local economy.

As the reimagining of Tampa International Airport takes shape, it remains vigilant for new opportunities to serve the regional economy of Tampa Bay. The airport currently offers more than 70 non-stop flights to destinations throughout the US and around the world, including Frankfurt, Zurich, Panama City and London.

The Frankfurt service on Lufthansa began in October 2015, and opens the Tampa Bay area to virtually all of Europe and Asia within one stop. This service complements the already successful international service offered with airline partners such as British Airways, Air Canada, Copa Airlines, Edelweiss Air and Cayman Airways.

Tampa International Airport was conceived as an economic engine supporting the greater Tampa Bay region through ease of travel and access to the world. Since opening in 1971 with a revolutionary and oft-copied design, Tampa International Airport has been, and is still, America's favourite airport; the efforts to reshape it today will ensure that this remains so for generations to come. 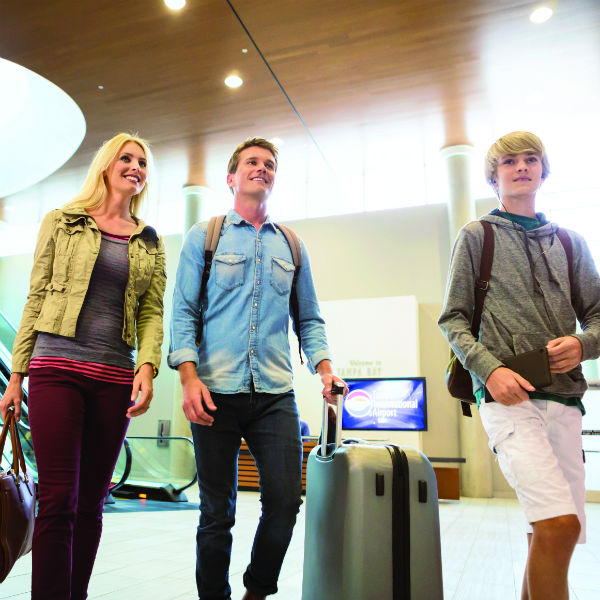 The airport’s focus on passenger experience has led to numerous accolades.