An upgraded international airport has opened up countless tourism opportunities for the area around Victoria Falls. The Civil Aviation Authority of Zimbabwe reveals what's in store for visitors to the heart of Africa.

Victoria Falls International Airport (VFA) started operations in 1967 providing mostly domestic flights from Harare, as well as international services. It is located 21km south-east of Victoria Falls town. In 2013, the Civil Aviation Authority of Zimbabwe (CAAZ) embarked on a project to upgrade the airport at a cost of $150million.

The project is now complete and was commissioned in November 2016. VFA now boasts:

The airport can now handle long-haul flights from around the globe. VFA is located within the heart of Central and Southern Africa: Angola, Namibia, South Africa, Mozambique, Zambia and Botswana are all within two hours away by air, making it a national regional tourism hub.

VFA is currently serviced by scheduled domestic and regional flights by Air Zimbabwe, Fastjet Zimbabwe, South African Airways, British Airways, Comair, Air Namibia, Ethiopian Airlines and Kenya Airways, as well as charter flights from the region and elsewhere in the world. South African Airlink will be introducing flights between Cape Town and Victoria Falls, six days a week, from summer 2017.

VFA is the gateway to the mighty Victoria Falls, which are one of the Seven Natural Wonders of the World. The UNESCO World Heritage Site is known locally known as Mosi-oa-Tunya, meaning 'the smoke that thunders'.

The majestic waterfall is located approximately halfway down the course of the Zambezi River, where the surge of the waterway is exemplified by the unfolding of this spectacular natural phenomenon and its accompanying gorges, which are 1,708m wide and 108m high, making it the widest waterfall in the world. The Zambezi is the fourth longest river in Africa, after the Nile, Congo and Niger.

The Victoria Falls is a core part of the Kavango Zambezi Trans-Frontier Conservation Area, (KAZA-TFCA) - the largest region of its type in the world -which spans Zimbabwe, Zambia, Namibia, Botswana and Angola. It sits at the hub of a vast, pristine and wildlife-rich tourism belt that is home to nearly 60% of Africa's remaining elephant population, as well as 35 national parks and protected areas, including the Okavango Delta, another UNESCO World Heritage Site. The largely underexposed region boasts some of the most and diverse and unspoiled wildlife areas left on the planet.

Victoria Falls Town has a capacity of 3,800 beds a night for guests, ranging from lodges to three star and five-star hotels. Most of the latter are located within 15 minutes' drive from the rainforest and include conferencing and leisure facilities.

Victoria Falls offers a number of scintillating activities, earning itself the title of 'Africa's adventure capital'. These include tours of the falls, steam-train safaris, bungee-jumping, rafting and kayaking, sunset boat cruises on the Zambezi River, canoeing, crossing the gorge by swing or zipline, elephant-back safaris, walks with lions, game drives and helicopter rides over the waterfall. 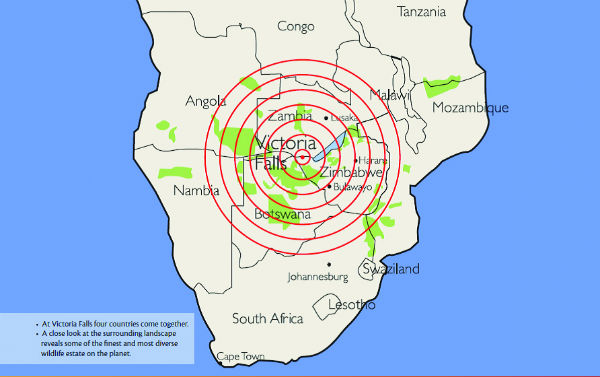 Victoria Falls International’s location within easy reach of six African nations makes it an natural gateway for tourism in the region.