Chubu Centrair International Airport, Nagoya is one of the busiest in Japan, serving some of the country's key business centres and over ten million passengers a year. Route development executive Felix Hartanto discusses why it's such an important hub and how the airport is looking to develop in the next few years.

Could you tell us a little about Centrair (NGO)?

Felix Hartanto: Centrair opened in 2005 as a 24-hour international airport on a man-made island. As of June 2016, Centrair's international network covers 353 passenger flights through 27 airlines for 40 destinations around the world. In terms of domestic flights, eight airlines operate 81 flights to 18 destinations across Japan. We have been awarded the World's Best Regional Airport for the past two years by Skytrax and ranked sixth in its World's Top Ten Airports 2016.

What makes it quite so well positioned?

Centrair is located right in the heart of Japan, in the Chubu region - translated as central region - as well as being located in the country's manufacturing hub. A considerable number of world-class Japanese manufacturing company headquarters or factories are based in the Chubu area including Toyota, Suzuki, Yamaha, Mitsubishi Heavy Industries and Brother.

Centrair is also the gateway to the Shoryudo - Rising Dragon routes, a top tourist destination in Japan that covers the central part of the country. It only takes approximately two hours from Nagoya to Tokyo; to Kyoto and Osaka, it's under an hour.

What does it offer that competitors don't?

Centrair operates with quality service 24/7, 365 days a year, and enjoys strong business demand from corporations and manufacturers in the region - offering a higher yield for airlines - as well as strong demand from foreign residents living in Aichi as well as neighbouring prefectures.

We also offer the Fly Centrair initiative targeting business travellers, which is run in cooperation with local government to prioritise flying overseas in a single bound from Centrair, rather than from Haneda, Narita or Kansai International Airport. The effectiveness of this initiative has been highly appreciated by airlines that fly to and from Centrair in terms of helping their bottom line.

What benefits does Centrair offer for low-cost carriers (LCCs)?

Construction of a new specialised LCC terminal will get under way soon, and operations are expected to commence in the first half of 2019. The 24-hour nature of the airport means LCCs can make Centrair their main hub - AirAsia Japan, currently preparing to begin flying again, is in fact making Centrair its hub. Spring Airlines has also based two aircraft at Centrair, operating two round trips to China on daily basis.

What developments do you see on the horizon in the next few years?

Chubu region's economic strength has been proven by high industrial shipment rates, as well as high employment and a strong, affluent base population - according to government statistics - in comparison with other big cities such as Tokyo and Osaka.

In the next few years, further economic development, as well as an increase in attractive tourist destinations in the region, such as LEGOLAND Japan, for example, will certainly increase the demand for air travel through the hub.

The percentage of foreigners entering Japan via NGO was 26% in 2013 and went up to 41% in 2015. This trend of increasing foreign inbound tourists is also expected to grow, especially from the Asian market, where visa requirements have been relaxed by the Japanese Government.

An indoor exhibition facility for ZA001 (Boeing's prototype 787-8) will be built and is expected to open in the latter half of 2017. A 60,000m2 exhibition hall will also be built on the Centrair Island, and that should open in the latter half of 2019 to meet businesses' growing MICE demand. Chuo Shinkansen - a superconducting maglev line offering a 40-minute connection between Nagoya and Tokyo, is expected to be opened in 2027. 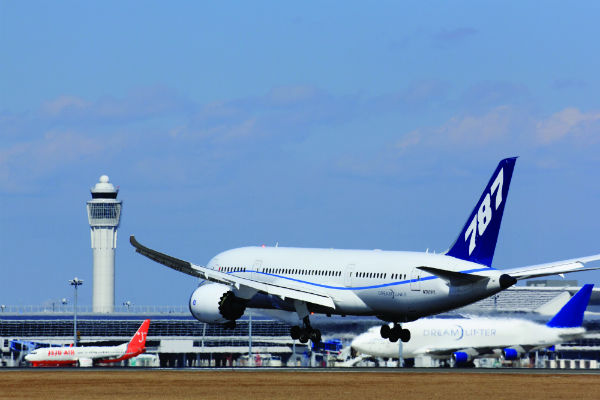 ZA001’s homecoming – Centrair does not only serve as the gateway to the Shoryudo but it is also located at the heart of Japan’s aerospace industry.