As the new ground run-up enclosure at Helsinki Airport completes final testing and enters active use, Future Airport speaks to Vasco Velez Grilo, managing partner at Valis Engineering, about how his team handled the challenges of the project.

Among the biggest frustrations for airport operators are mandatory large investments that are needed to meet regulatory demands but are unlikely to generate direct financial returns. When noise pollution guidelines require large airports to build ground run-up enclosures (GREs) to test aircraft engines, for example, it
can seem like money down the drain.

These structures must be large enough to enclose the biggest aircraft they might deal with and carefully engineered to protect local residents from disruption, but they generate little revenue, meaning that the final reward of all that expense and effort is simply avoiding the penalty for noncompliance.

With that in mind, cost-effectiveness in such endeavours becomes even more important than usual. Ideally, the GRE should be efficient for a long time to come - meaning it requires not only solid weather-proof and noise-absorbent construction, but also the ability to adapt over time to newer, larger aircraft and updated rules. It's a job that calls for experience working within stringent legislative landscapes and serious noise reduction.

For its 2016 GRE project at Helsinki Airport, operator Finavia engaged Valis Engineering, a Portuguese group that has specialised in industrial noise reduction for the past 30 years. Valis's previous work includes 600,000m² of noise barriers for highways and railways in Portugal and Spain. Three years ago, it brought its knowledge of noise reduction and its experience of working closely with strict infrastructure guidelines to its first airport projects at Lisbon Airport. Valis managed this and the Helsinki Airport project from start to finish.

"We manufacture the whole structure," explains Valis managing partner Vasco Velez Grilo. "We're practically integrated from engineering and production to installation and maintenance. This approach generates a large number of scale economies, which are then translated into savings to the client."

Finavia awarded Valis the project in October 2015, with a deadline of April 2016 for design and manufacturing, and an installation completion date of September 2016. In addition to EU and local regulations governing airport noise pollution, Finavia provided stringent requirements of its own. Six receptor points around the perimeter of the airport would measure the effectiveness of the noise barrier.

The enclosure had to be usable for testing at least 90% of the time, regardless of wind speed or direction. It also had to withstand Finland's extreme winter weather - a new challenge for Valis, which is based in sunny Portugal.

"The temperature effects in Finland are quite different to what we usually get in southern Europe because the shifts in temperature are larger," explains Velez Grilo. "They get -25°C in the winter as a bottom line, compared with about 0°C in Portugal. We had to test the noise-reduction elements under these conditions in the laboratory, because this kind of information is not standard in the industry."

Unable to run computer simulations because of the lack of existing data, the engineers soaked their noise reduction panels with water and then froze them to simulate the effects of a Finnish winter, before testing their effectiveness. The panels held up, with any adverse impacts on their performance undetectable further than 100m away.

To complement the noise reduction properties of the panels, Valis's patented noise diffraction controlling device (DCDT) was placed atop the GRE's walls. It works by reducing the diffraction of sound waves as they hit the top of the barrier, creating a larger acoustic shadow outside the walls, in which noise is almost completely dampened. It also improves aerodynamics by minimising turbulence during tests; although the aircraft are stationary, air intake through the engines must be taken into account, as well as the direction of exhaust and the added noise of turbulence.

"The main factors are wind direction and wind speed - and nobody controls that," says Velez Grilo. "We had to maximise usability within the location of the proposed position for the GRE, which was set by Finavia. To further improve noise abatement, it was agreed that the GRE should be turned 4° clockwise in relation to the runway/taxiway grid. This also increased usability by 2%, considering prevailing wind conditions."

A bespoke jet-blast deflector, concave like a skate ramp, was installed at the back of the structure to redirect airflows upwards. Valis's engineers also innovated when developing the product, changing the shape of the enclosure so that the open end was wider than the closed end, taking it from the traditional U shape to a V. This decreased turbulence from air intake, even in adverse crosswind and tailwind conditions, and brought usability up to the required 90%.

The other advantage of the V shape is its adaptability, as Velez Grilo explains: "The U shape poses limitations in the future when you need to expand the GRE for larger wingspan aircraft," he says. "Besides improvement in usability, our V shape allows for the client to lengthen and increase the height of the structure in the future with minimal investment."

Cost-effectiveness is a big factor in Valis's approach; the company's GREs are built in a modular format for fast assembly and easy structural upgrades. Rated classes A4 and B3 for insulation and noise reduction, Valis's Complage sound-dampening panels have a steel casing and distended aluminium face to keep expenses low, while ensuring a solid structure and removing the risk of corrosion. They're filled with inert mineral wool insulation, which does not degrade over time, and finished with polyester powder-coating.

With everything done in house, the Valis team was able to keep costs down by sticking strictly to the target deadline.

"We had slight delays on the approval process during the design and manufacturing phase, but we were able to compensate during manufacturing and installation," says Velez Grilo. "The project ended up finishing perfectly on time because of our integrated manufacturing."

The project had to be completed in September 2016, in time to accommodate an extended testing phase for airlines - a quirk of the airport market that sets this job apart from Valis's previous work.

"On a highway, the regular users are regular drivers so there's no experience to be gained from them," Velez Grilo explains. "But airline companies are both the users and major stakeholders in airport projects. They are not always involved in the development of the infrastructure, but they need to be factored in."

The testing period allowed the airlines that use Helsinki Airport to conduct trial runs and familiarise themselves with the new GRE. Valis provided some extra reading material for users, but no changes to the structure were required. For the future, Valis provides a maintenance plan to all their clients including after-sales care and regular inspections by their technicians, as well as easily available spare parts.

"We are very present with the client," says Velez Grilo. "We have an integrated view of the project, the product and the parts, and constant contact with the client allows us to deliver more value during the lifetime of the project. It's thinking of their investment going forward in terms of durability and maintenance. This approach is very important in customer care; making sure that the customer sees the structure in the best condition possible for years to come."

Since noise abatement structures seldom pay for themselves directly, the success of such infrastructure projects can ultimately be measured in cost-effectiveness throughout their lifetimes. Finavia's first ever GRE project went well: a smooth construction process of a cost-effective, efficient structure, built to adapt and last. 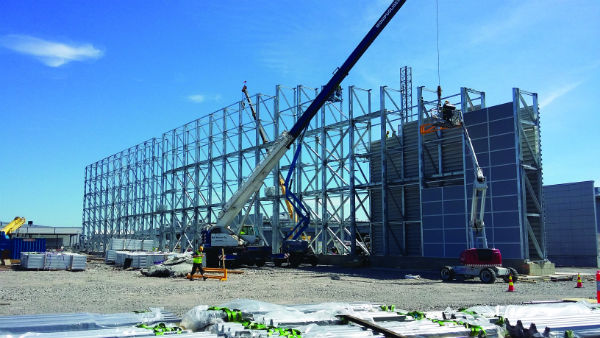 The ground run-up enclosure under construction at Helsinki Airport. Six receptor points around the perimeter measured the effectiveness of the noise barrier. 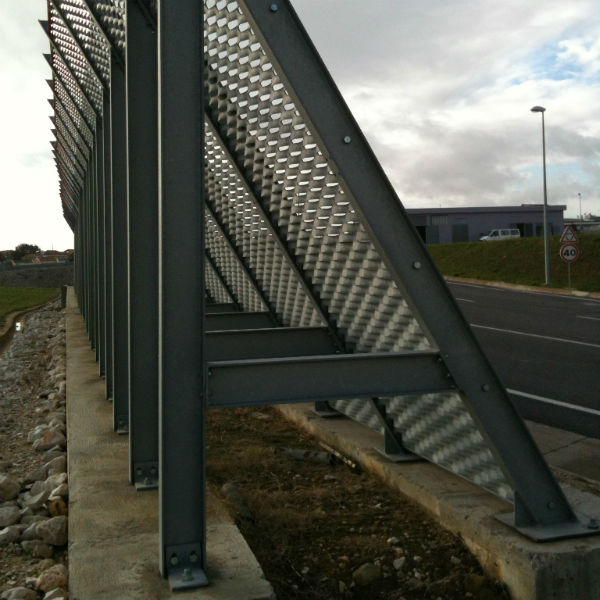