Midstream Lighting - Lighting the way to the future

For any technology used in an airport, the key considerations are reliability, cost-efficiency, performance and regulatory compliance. When it comes to apron lighting, LED systems look set to overtake traditional sodium and metal halide lighting as they meet all of these criteria. Future Airport speaks to leading supplier Midstream Lighting about what makes LED the best option.

Cutting cost without compromising performance is a desirable goal in any industry but, in the aviation sector, it is among the top priorities. Energy savings - and the cost savings that follow - are highly sought after by airports, and are within reach when it comes to airfield ground lighting and aircraft stand lighting because the case has successfully been made for LED technology.

The market's leading suppliers of LED solutions for airports have shown that the technology conclusively delivers the results required by ICAO and FAA in a commercially viable way and that their specialist knowledge of lighting design for airports can optimise the energy savings that can be made. In addition, it helps airports to meet their CO2 reduction targets.

"We have been talking to airports about LED lighting for three years and, at first, they were slow to move, despite the fact that the industry is usually an early adopter of new technology," says Yuli Grig, commercial director at Midstream Lighting. "They were unsure whether it worked well but, in the last year, there has been a flurry of activity. They are looking to change high-mast lighting to LED in a host of airports in the US, Europe, Latin America, the Middle East and Africa, with a mix of newbuild, retrofit and apron reconfiguration/expansion.

"Airports now accept that the technology works, so they are looking for the right suppliers that have the right technology to design a scheme that is reliable, long lasting and meets the regulatory criteria.

Since 2009, Midstream Lighting has supplied LED luminaires for heavy-duty industrial use, providing a reliable, high-performance lighting solution to sectors as diverse as highways, marine, rail and aviation. Over the past year, it has saved its customers more than seven million kilowatt-hours of energy thanks to its unique use of optic lenses, its use of advanced materials and the robust construction of its systems.

Midstream's technology for high-mast lighting is installed at Glasgow Airport - the first international airport to completely switch to LEDs for stand lighting - and the replacement of the 236 sodium projectors cut energy demand by 61% while doubling the light levels. London's Gatwick Airport, where the transition to LEDs is half finished, has already seen similar savings and a significant improvement in visibility for airside operations.

"Airports are making the decision to install LEDs based on their evaluation of efficiency and cost. They come to us because we know the complexity of design they face and understand the regulatory requirements. Our unique system directs light through a refraction lens to reach the edge of the apron, so we can meet the requirements with fewer luminaires and less glare," says Grig.

For example, on masts 20-30m in height, tilting a light projector at an angle of 45° will create glare for pilots coming in, which could pose a safety hazard.

"Our lenses mean the luminaire can be mounted almost horizontally, as the light is directed to the back of the apron. We think that is a key advantage of the system. We designed the luminaire specifically to suit airports, but by working closely with the airports or the consultant engineers, we can maximise the efficiency of the new lighting scheme.

"To replace 400 sodium or metal halide lights, you may only need 300 LEDs, so there is less infrastructure to manage. It is easy to install without rewiring and is built to last ten years," adds Grig.

In its recent tender for a major UK airport, the potential energy saving Midstream demonstrated was equivalent to planting 60,000 trees. Savings of millions of kilowatt-hours are hard to ignore, so there is little doubt that LEDs will spread throughout the world's airports. 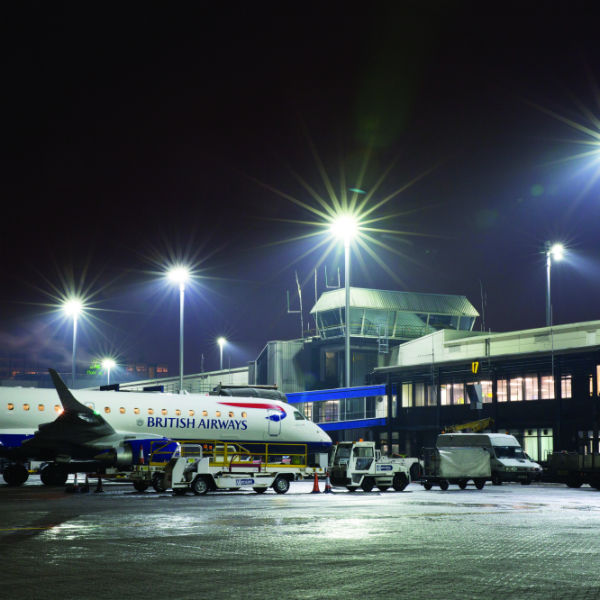