Radars have been used for the detection and tracking of birds for several decades. It is only in recent years, however, that the technology improvements have led to radars being used for their commercial applications at airports and airfields to help reduce the risk of bird collisions. Specialist avian radars are being used as a major tool to reduce the financial and human-life losses caused due to collisions.

Collisions between birds and aircraft (known as bird strikes) can have catastrophic consequences, and have resulted in the loss of at least 400 lives and 52 aircraft in civil aviation. It is estimated that every year in the US alone, up to $1 billion worth of losses are caused by bird hits.

Military losses are more difficult to estimate, but, according to available data covering 1959-99, there have been 283 military aircraft lost and 141 deaths recorded in a limited number of western nations.

Miltronix's unique bird radar system offers 3D detection and deterrence of avian activity within a 360° radius of up to 11km, and at heights of up to 2,000m.

Those strikes that do damage aircraft or result in precautionary delays are an important cause of economic loss to the military and aviation industry. To preserve public safety and reduce this loss as far as possible, the International Civil Aviation Authority (ICAO) and the Federal Aviation Administration (FAA) recommend that airports take steps to reduce the risk of bird strikes as far as reasonably possible. This recommendation may be reinforced by separate national regulations that require airports to take steps to reduce the bird-strike risk, such as those issued by the UK Civil Aviation Authority in 1998. The US Federal Aviation Authority (US FAA) has issued guidelines for the use of bird radars at airports.

To an extent, the control of the bird-collision problem has been inhibited by the non-availability, so far, of effective and modern technology to detect and deter birds near airfields.

A first of its kind, the Miltronix system offers accuracies of bird detection unrivalled by any competitive system. Its radar systems are fully solid state radars that have been specifically designed to detect and track birds at airports and other sites such as wind farms and landfill areas. They are designed to be affordable and easy to operate and maintain.

Miltronix's unique radar system offers 3D detection and deterrence of avian activity within a 360° radius of up to 11km and at heights of up to 2,000m. Until now, systems available on the market have offered 2D/2.5D systems, the disadvantages of which have curtailed the use of bird radars at airfields.

One advantage of the Miltronix radar is that it is easy to use and maintain. At the heart of the system is a multibeam 3D solid-state radar that has been specifically designed for the detection and tracking of avian activity. The sophisticated 3D graphics display software visualises bird activity around airports and other installation sites in complete 3D. The system also includes a sophisticated tool that analyses bird activity data at the installation site.

The radar system offers all the high-tech features found in the most sophisticated military radar systems. Using the 3D military technology, the Miltronix radar has built-in long-range directional acoustic deterrent devices with a maximum range of up to 4km. Fully programmable with different bird distress calls, these high-energy acoustic devices overcome the disadvantages of conventional bird deterrent techniques. Using the latest signal-processing algorithms, it is packed with features not found in any other competitive systems.

The Miltronix system is a tool that all users will find invaluable. It will help airlines to save money and improve flight safety, leading to fewer incidents caused by bird collisions, and creating a safer airspace for all. 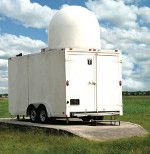 Miltronix’s radar system offers 3D detection of avian activity within a 360° radius of up to 11km.