Initiated by Groningen Airport Eelde, the Green Sustainable Airports (GSA) project is searching for sustainable solutions to reduce the impact of airport operations on the environment. Seven airports from six countries are involved, together with regional authorities and a number of knowledge institutes, with the aspiration of becoming front-runners in terms of sustainability. The project is partly funded by the European North Sea Region Interreg IVB Programme.

Within the scope of GSA, Groningen Airport Eelde has introduced continuous descent approach (CDA) to the airport. A CDA is an aircraft operating technique whereby an arriving aircraft descends from an optimal position with minimum thrust, while avoiding level flight. CDA saves fuel and also reduces aircraft noise and atmospheric emissions in the vicinity of the airport, resulting in environmental and economic advantages. Currently, all commercial flights adopt this 'glide-landing' technique. It is expected that other regional airports will follow this example of CO2 reduction. 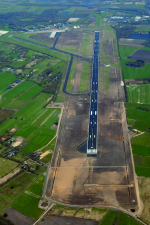