How effective are conventional explosives trace detection systems at airports?

Dr Norbert Klöpper: Explosive trace detection (ETD) is now an integral part of the passenger screening in the EU, US and other countries. This approach has been established to minimise the probability of a passenger smuggling an explosive device on to an aircraft. Typically placed after the X-ray hand-luggage scanners and walk-through metal detectors, but sometimes adjacent to the security body scanners, the aim is to identify individuals who may have been in contact with explosives and to carry out thorough checks. Based on legal requirements, 10-20% of passengers have to undergo this procedure. This could be because they trigger the scanning systems, either in person or by something present in their carry-on bags, or where passengers are selected randomly for a more thorough check than normal.

The systems deployed currently are predominantly based on ion-mobility-spectrometry (IMS), which provides high sensitivity and which, over the years, has become the industry standard. The way in which the IMS system is used is simple. Firstly, a non-scratch sample swab is rubbed in a pre-defined pattern on the person's hand, their luggage, laptop or mobile phone, and this swab collects any minute particles of explosives - trace explosives - that may be present. The swab is inserted into the detection instrument, where it is rapidly heated to 200°C. The resulting vapour is ionised by means of an ionisation source to create ions that are then examined by their flight time in an electric field. When the device identifies unique ions resulting from the presence of an explosive, an alert is triggered and the operator informed. The operator can then inform their supervisor so that an agreed security procedure can be implemented.

The decision to enter the airport ETD arena was taken following a careful study of this market, where the company recognised that most operators were concerned with the majority of the key Bruker attributes outlined above. However, the company also recognised that one aspect of its existing operation was problematic: compliance with regulations relating to the use of radioactive sources in airport-based technologies. Because Bruker had pioneered the use of a non-radioactive source in a stationary IMS air monitor, it recognised that a careful blend of its existing IMS technologies could allow the production of ETD packages that would provide an optimum solution.

Since 2015, Bruker has installed more than 600 systems, mainly in Europe.

At which airports may we see the DE-tector in action?

Bruker first started to develop the DE-tector touch benchtop ETD system in 2009. Listening to customers, it has completed its ETD portfolio with the RoadRunner, a dual-mode, handheld system both for vapour traces (colloquially known as a 'sniffer') and for swab sampling. Since 2015, it has installed more than 600 systems, mainly in Europe. Its largest installation, with 180 systems, is at Frankfurt Airport. With more than 64 million passengers travelling through the hub in 2017, Frankfurt is not only the biggest airport in Germany, but also one of the largest in the world. Bruker is also present at major hubs such as Geneva and Lyon. A lot of smaller airports have also used its systems after trying rival products, and recognised the DE-tector's quality, user-friendly design and ease by which it was maintained.

The difference lies in the product's usability and ease of training. For example, there are 4,000 people involved in security screening at Frankfurt Airport. With an annual fluctuation of 10-20%, this means that the supervisors have to train 400-800 people a year.

Additionally, the maintenance cycle of Bruker's systems is 12 months, so the exchange of filters and so forth needs to be done only once a year. Bruker's experienced instructors can train local maintainers to ensure high operational availability.

What certification does the system enjoy?

The company is proud that its entire ETD product portfolio meets with ECAC standards. This includes the handheld system RoadRunner, which - in addition to weighing just 3.5kg - is the first and only handheld system on the market that has achieved this challenging certification. Quite recently the DE-tector flex has been tested by the accredited test laboratories, and also meets European Civil Aviation Conference (ECAC) standards.

What trends are likely to shape the development of ETD systems in the future?

The trend for ETD is mainly shaped by the threat assessment of the authorities. As a manufacturer, Bruker is in close contact with national and local aviation authorities and is continuously adopting their requirements regarding detectable substances.

From a technological perspective, systems that can detect more substances than are listed on the most recent threat list are on their way. Bruker believes that a system based on mass spectrometry (MS) could be the answer. MS provides a better selectivity of substances that leads to a lower false-positive rate. 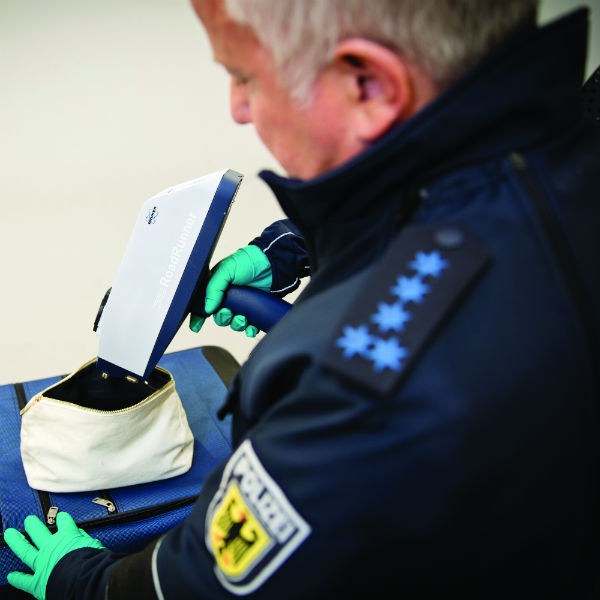 The increased risk of terrorist attacks has led to the screening of passenger luggage for traces of explosives becoming routine procedure.
Swab samples for screening must be taken manually, so proper operator training is essential for ensuring an acceptable turnaround time.