Biral - Something in the air

Thunderstorms can wreak havoc in aviation, affecting departures and air traffic, as well as having implications for airports. As in many walks of life, preparation is the key when it comes to mitigating their impact. Dr Alec Bennett, meteorological products manager for Biral, explains how the company's groundbreaking BTD-300 single-site detector offers unique detection ability.

Bad weather is the main cause of flight delays worldwide, with thunderstorms playing a significant part in this disruption - on the ground and in the air. With the capacity to divert flights and shut down all ground operations, knowledge of nearby thunderstorm development is vital to ensure airport safety and minimise downtime.

While no one can prevent the arrival of a thunderstorm over an airport, early warning of its development and location ensures that key personnel are prepared for the possibility of a quick change to their activities. Since overhead lightning usually spells an end to ground operations, this early warning allows weather-sensitive tasks to be prioritised ahead of the approaching storm, and ensures that all personnel and equipment are kept safe, reducing the risk of injuries. Thunderstorm warning systems also ensure airport activities can restart as soon as possible after a storm passes, maximising operational efficiency and minimising downtime.

In addition to disruption of ground operations, thunderstorms represent a real hazard for aircraft on take-off and approach, when the normal in-flight procedure of avoidance cannot be followed. In these instances, it is not usually lightning that represents the danger but the severe turbulence, wind shear, icing and damaging hail that makes the air above the airport a dangerous place. Early detection and location of thunderstorms allows air traffic to be managed appropriately, ensuring the greatest safety and comfort for passengers and crew.

Thunderstorm warning systems can be either individual stand-alone units positioned at the airport, or formed from a network of sensors spread out over hundreds of kilometres and operated by national weather services or private companies. Single-site detectors have the advantage of being dedicated to the area around the airport so usually offer the greatest chance of detecting all local lightning activity compared with a third-party network, which needs to reach a compromise between lightning-detection efficiency and broad geographical coverage.

Being located and owned by the airport, stand-alone detectors have no ongoing data subscription costs, delays or reliance on internet access. While regional networks typically provide greater individual lightning location accuracy, stand-alone sensors are designed to have sufficient accuracy to reliably identify which reporting zones around an airport a thunderstorm occupies - distant, vicinity or overhead - and report the direction of the storm. While most thunderstorms drift into the airport's area of interest, some will form directly overhead. If only lightning detection is used, the airport will have no warning of this overhead threat until the first lightning flash occurs - which may strike the airport itself.

With this in mind, UK-based meteorological instrumentation design company Biral recently developed a stand-alone thunderstorm warning system, tailored for airport use, called the BTD-300. An important feature of the BTD-300 is its unique ability to detect the presence of strong electric charge in the air or on falling raindrops, which warns of the potential for overhead lightning activity several minutes before the first flash is produced.

Even if no lightning results, this warning is used to infer that a cumulonimbus cloud is over the airport - a significant weather event that is very difficult to detect by any other means at night when no lightning is produced. Cumulonimbus clouds are in themselves a threat to aircraft due to severe turbulence, wind shear and aircraft icing.

Nearly all thunderstorm detectors locate lightning using the powerful radio signals generated by their brief but strong electrical currents. Since lightning is not the only source of radio pulses, the significant benefits of stand-alone sensors have previously been outweighed by interference and false alarms caused by man-made radio signals. A key feature of the BTD-300 is its immunity to all man-made radio interference, since it is the first detector to measure electrostatic, rather than radio signals, to automatically detect and range lightning.

By continually monitoring the atmospheric electrostatic field at a rate of 100 times a second, signals unique to lightning are identified by the unit's three electrostatic antennae. The maximum detection range is 83km (45nm), comfortably exceeding the 56km (30nm) limit required for airport thunderstorm reporting, as decreed by the US Federal Aviation Administration. An optional module provides lightning direction.

In addition to greatly reduced false alarms, this electrostatic technique is highly sensitive to all forms of lightning, detecting and ranging cloud-to-ground and intra-cloud lightning activity. Weak intra-cloud lightning is often the first indication of a developing storm but is particularly difficult to detect using the low-frequency radio systems commonly used by lightning network providers and other manufacturers of stand-alone detection systems.

Due to the ability of the BTD-300 to detect these weak but informative intra-cloud lightning flashes, the system can detect more than twice as many flashes as conventional low-frequency networks. The unrivalled lightning-detection efficiency of the BTD-300 provides maximum early warning of an approaching storm as
well as confidence that the lightning threat is over.

The ability to detect potential overhead storms and locate all subsequent lightning flashes in the area is unique to the BTD-300, representing a significant step change in early warning of an impending storm as well as in giving much higher confidence that the threat has passed. The BTD-300 is a powerful and complete thunderstorm warning system suitable for any airport. 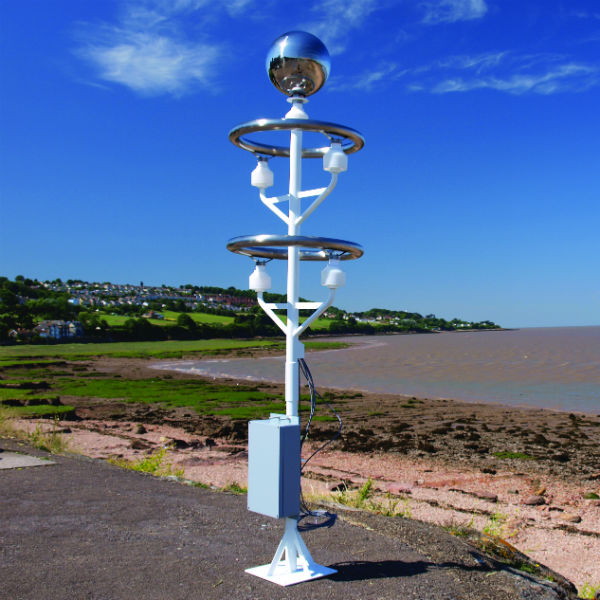 Stay in charge: the BTD-300 is unique in using electrostatic detection to recognise and range thunderstorms.