As water accumulates on a runway due to intense rainfall, aircraft are increasingly at risk of aquaplaning. This leads to a loss of traction and, depending on the severity of conditions, may cause the pilot to lose control of the aircraft.

If you have ever driven a car on a rainy day, you know what aquaplaning is. Now think of the possible consequences of losing control of a 400t aircraft landing on a wet runway. The worst thing is that this situation is not rare at all; for airports with very high-intensity rainfall - such as those in tropical areas - the hazard is often a reality.

The importance of water-film depth

The aquaplaning risk on runway operations depends on many factors, including runway slope and pavement texture, and aircraft characteristics such as weight and tyre inflation pressure.

According to ICAO Annex 14, a runway is contaminated by standing water when more than 25% of the runway surface area (whether in isolated areas or not) within the required length and width being used is covered by water more than 3mm deep. By complying with minimum values of the longitudinal and transversal slopes, runways are built to drain water. However, water drainage is not an instantaneous process and the depth of a water layer can grow as the run-off occurs.

Therefore, an estimate of the water-film depth (WFD) may be used as a key element for assessing the aquaplaning risk during rainfall conditions. Indeed, an accurate estimation of the accumulated water on critical areas such as the runway touchdown zone (TDZ) can be directly related to the severity of the risk. For ATC and pilots, this knowledge represents valuable information that leads to a safer and more efficient management of the operations.

A new way of calculating WFD

The WFD Module developed by Schneider Electric integrates real-time measured rainfall intensity data to achieve continuous water height estimations at any point of the pavement. Unlike many other similar algorithms, the WFD Module is designed using stationary and transitory approaches, which means that a continuous evolution of the WFD can be tracked while applying well-known empirical models, such as those used in road design.

The WFD Module has been implemented in the Schneider Electric MetConsole AWOS and is available for deployment.The module uses the three inputs described below.

The algorithm accepts any sources of measurement, including pluviometers, present weather sensors and external networks. More inputs will bring more precise estimations. All kinds of low and high-intensity rainfalls, for short or long periods, are suitable.

A simplified 3D model of the surface is internally built in order to calculate the different drainage lengths, paying attention to those areas where the flow paths converge and water may accumulate. The algorithm can work with much more complex models, if there is available information.

The mean macrotexture, related to the pavement's resistance to the run-off

The low number of necessary inputs results in an easy, immediate implementation for those customers that use MetConsole AWOS, with no impact on normal airport activity.

The MetConsole AWOS continuously reports on:

Also, the WFD Module can be used in conjunction with pavement sensors to enable the self-calibration feature. Pavement sensors give precise punctual measurements of the water layer, but lack information about the rest of the runway. MetConsole combines them and the WFD Module to ensure the best performance of both.

Historically, applying the equations of overland flow is a difficult problem to solve. The well-known Gallaway equation offers an empirical formula based on certain relationships and measurements of drainage lengths, rainfall intensities, slopes and other factors. Authorities around the world view this long-standing formula as reliable and use it.

The Schneider Electric WFD Module is compared with the empirical model in a simulated rain event of constant intensity of 200mm/h, for a drainage length of 5m (see Figure 4, right). The green line (transitory model) represents the water depth estimation given by the algorithm. After the stationary conditions are reached, its value equals the one predicted by the Gallaway equation (red line). In this sense, the water film depth estimation algorithm is an extension of the Gallaway method, accepted worldwide, to transitory periods.

As soon as rain data intensity is taken, the algorithm begins to compute the water film depth. The runway geometrical model is divided in parts and the flow lines corresponding to each drainage plane are analysed. The macrotexture is used to take into account the pavement storage and the fact that the run-off occurs after a certain water height.

To test its performance, the WFD algorithm results were confronted with historical data from pavement sensors; in total, more than 4.7 million real measurements were taken over a nine-month period by 12 different sensors in five airports. Rainfall intensity data was also provided. The most important data for the WFD algorithm test was the water film height, measured by radar principle up to 4.0mm. The accuracy of the sensors was better than ±30% (for measurements of 0.2-3.0mm) and its resolution was 0.001mm.

Once the sensors were closely monitored and any outlying errors (for example, out-of-range values or other counterintuitive effects) were accounted for and disregarded, the WFD algorithm computed the estimated water film depth, and this result was compared with the water depth measured by the sensor. These values are shown in Figures 1 and 2 (below left) for intervals corresponding with high-intensity rainfalls, which are the most interesting events. The sensor measurements are shown in red and the WFD algorithm estimations are shown in green.

Throughout this and the rest of tests, the mean absolute percentage deviation (MAPD) was computed as an indicator of the accuracy. The estimations provided by the algorithm were perfectly acceptable.

Because of the geometrical model that averages the conditions on the runway, the comparison between the estimations and the punctual measurements of the pavement sensors turns out to be a careful problem (see Figure 3, above). Slight changes of the geometry and the formation of puddles explain the differences that may be encountered when comparing external sensors and the WFD module, and because of it they can be used to fine-tune the internal working of the algorithm.

The Schneider Electric WFD Module is a pioneering algorithm in estimating the water accumulation on a runway with a low number of measurements, deployed with no effects on normal airport operation. 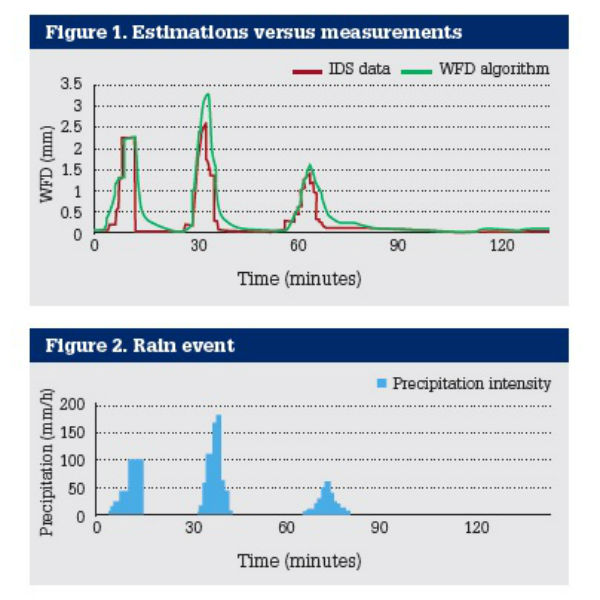 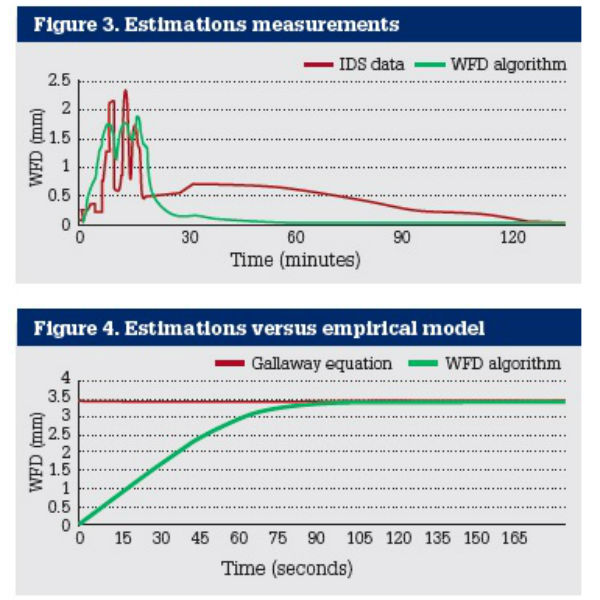