Aeronautical Services and Procedures - It pays to implement PBN

There is no doubt that performance-based navigation (PBN) implementation will provide great benefits to airspace users as a whole. Aircraft no longer have to fly on tracks between navigational beacons - they can now fly point to point - and while track miles flown may not be reduced in all cases, many other benefits could be realised.

Take the example of a route from an airport that exits a flight information region (FIR) to an adjoining FIR at a single reporting point on a VHF omnidirectional range (VOR) radial on the FIR boundary.

Presently, in such a situation, traffic inbound and outbound from the VOR is on reciprocal tracks. This means that quite often aircraft inbound to the airport are kept above the optimal descent profile by air traffic control, while outbound traffic is kept below the optimal climb-out profile until its has passed.

In this case, inbound and outbound traffic is unrestricted, and can climb and descend using optimal profiles. This, combined with a global navigation satellite system (GNSS) approach, will enable inbound traffic to go straight into the approach without having to overhead the VOR.

The route being exactly 3nm from the adjacent airspace boundary, it makes more efficient use of the available airspace, and the tracks can be de-conflicted using separated routes and altitude gates (see figure, right). While the departure traffic will have to fly slightly more track miles, it will benefit from an unrestricted climb to cruise altitude and so will save fuel. It should be noted that these minimal separation routes are only available under radar surveillance.

If such optimised routes are possible, why are there still so few of them and why, in most cases, are aircraft still flying navigational aid to navigational aid? To answer this question, we have to look at the actual implementation process.

The stakeholders in PBN implementation are the airlines, airports, air navigation service providers (ANSPs) and the civil aviation authorities (CAAs).

The airlines will be the biggest beneficiaries of PBN implementation, and they realise that RNAV/RNP is the way forward. Most major airlines have gone to the expense of fitting their aircraft with the required on-board equipment, although some are looking at the cost-effectiveness of refitting their fleet; why refit when there are very few RNAV/RNP routes?

So at the moment there is a mix of RNAV/RNP-capable and non-capable aircraft, which makes full PBN implementation difficult.

The airports are concerned about developing different approach procedures and are not too concerned about what is happening 20 or 30 miles away in the en-route structure. Most ANSPs are now privatised, and the entire restructuring of airspace and routings does not seem to be high on the to-do list. A lot of CAAs in Europe have become regulatory bodies only and no longer get involved in the actual determination of routing structures, other than as part of the approval process.

All of the stakeholders can offer valuable input to such a project, but to whom? The people that really do the work of creating a new PBN route structure are:

All the people in this initial implementation team are highly qualified and the process from inception to implementation can take over a year and a half. So, who is going to pay for all this time and effort?

Let us look at the financial practicalities of PBN implementation. The biggest beneficiaries of such a project will be the airlines, so obviously they should pay. However, why should one airline pay for the extensive work by a highly trained team when the benefits will be available to all, including the competition?

As a collective airline group, the International Air Transport Association (IATA) could pay, but it is unlikely think that IATA will take on the expense of changing the entire routing structure in Europe for the benefit of some of its members.

The ANSPs, who are now mostly privatised, could also benefit from PBN implementation, but to fund such an expensive project would require increasing the en-route charges. In the present financial climate this would not be acceptable to the airlines.

As mentioned, airports are not really interested in the en-route structure, so they are not going to pay for this work to be done. For regulatory-only CAAs there is no mandate to do this work, while for CAAs that are state-run PBN implementation is funded by the government; even then, the finances are tight for such an expensive project.

PBN approaches are sure be implemented in the future, but the question remains - who will pay for it? 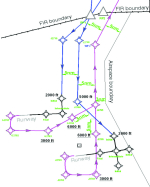