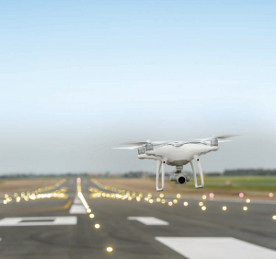 It is globally acknowledged that the increasing frequency of intrusive drone-related incidents in and around airports presents a security, operational, and economic challenge to airport operators and their surrounding communities. To address the threat this illicit drone activity poses to airport security and the safety of airport operations, considerable investment is being made in the development and implementation of drone detection, identification and mitigation measures.

There are, however, many roles ‘legitimate’ drones can perform in airport operations, offering significant benefits by driving operational and cost efficiencies. For example, airport security can supplement existing fixed-camera surveillance networks and manned patrols by deploying sensor-equipped drones. These are able to rapidly investigate a suspected anomaly, or conduct routine inspections of security infrastructure such as airport perimeter fences. Similarly, airport managers are exploring the use of drones for a range of routine and reactive applications, from monitoring the condition of airport buildings, facilities and infrastructure, to inspecting runways and taxiways for damage and debris. These tasks currently require an individual in a vehicle and typically take considerable time to conduct.

Several international airlines and maintenance repair and overhaul (MRO) service providers are also experimenting with the use of drones to conduct aircraft inspections. With a combination of laser technology and high-resolution imagery, drones can be safely used to identify and flag potential problems – such as paintwork, structural damage and evidence of lightning strikes – for further examination by the airline’s maintenance team. Pilot phases have yielded promising results with increases in speed and precision, reportedly cutting end-to-end visual inspection times of four to 10 hours to less than two hours for aircraft such as the B737 and A320.

As the drone industry and its enabling technologies mature, more legitimate drones will find their way on to airfields in roles that offer similar operational and cost benefits. Commercial package-delivery capabilities can transport spare parts from off-site warehouses to maintenance hangars. Transport asset tracking and management capabilities can be used for security monitoring and management of the large fleet of vehicles used to service aircraft and move materials.

To realise their full potential and deliver the desired benefits, legitimate drones will need to fly over people, and operate day and night, beyond visual line of sight, and in conjunction with other drones in the airport ecosystem. So, while legitimate drones have much to offer airport operations, they present significant technical and operational challenges for ATM, the most important of which is the ability to distinguish which drones are legitimate and which are illicit.

Good from the bad

The primary purpose of a countermeasure system is to detect an object of interest, assess and verify its status, and respond by taking predetermined steps to mitigate its presence. For counter-unmanned aircraft systems (C-UAS) the underlying premise in their design and operation is that all drones detected are considered illicit, which means they lack the ability to distinguish – on their own – between an illicit drone and a legitimate one. This presents a fundamental operational challenge for airports seeking to guard against illicit drones while also embracing legitimate drone operations.

I say ‘on their own’ for two main reasons. Firstly, while the ability for C-UAS to detect an object and verify it as a drone (in many cases, including its make, model and type) is well developed, they are not yet able – without integrating with other systems – to determine the registered unique remote identification (remote ID) details of the drone, and hence are unable to assess whether the status of the drone is legitimate or illicit. There are few exceptions, notably C-UAS offered by drone manufacturers that are only capable of detecting and identifying the drones that they make.

Secondly, C-UAS based on radar technology can have additional limitations. These systems assign on acquisition a unique ‘identity’ label to each drone detected; however, that label is currently not transferable as the drone tracks from the view of one radar to another. Instead, the acquiring radar assigns the drone a new ‘identity’ label, which has no correlation to that given to it by the losing radar. Similarly, if the radar loses and then reacquires the same drone, which may happen when the drone temporarily goes into hover mode or flies behind a structure that blocks the radar view, it treats the drone as a new target and hence assigns it a new label. In both situations, the C-UAS could lead ATM to believe that more drones are operating than there actually are.

The implementation and integration of a C-UAS with ATM, therefore, does not in itself resolve the primary challenge of ATM being able to distinguish between illicit and legitimate drones. The solution to not only the technical but also the operational challenges lies in the capabilities offered by existing remote ID and tracking technologies. By requiring all legitimate drones – irrespective of their operator and make, model and type – to be fitted with the same on-board remote ID and tracking technology, integrated C-UAS/ATM/UAS traffic management (UTM) systems are able to distinguish between legitimate and illicit drones.

<2 hours
Hours visual inspection time has been cut to in pilot phases, from four to 10 hours, in aircraft such as B737 and A320.
Austrian Airlines

To illustrate this concept, consider a UTM system that provides both network and broadcast remote ID and tracking capabilities, enabled by a small, lightweight, low-power, low-cost module that can be easily installed on all types of drones. The on-board module uses proven technologies and concepts used in online and mobile communications, and information management, to transmit aircraft and flight data from the operating drone over the operative network to the UTM cloudbased server. It also simultaneously uses stable and robust Wi-Fi-based technology (for example) to create a unique beacon on the drone to broadcast a specific set of ID and location data at a high refresh rate. Essentially, the on-board module operates like a digital substitute for ADS-B and secondary radar, thus providing an effective alternate means of situational awareness in the shared airspace. Drone operators, pilots and other authorised actors can log in to the UTM web portal via a computer, tablet or smartphone to view in real time a map showing the identity and location of all legitimate drones operating in and around the airport, and track them. At the same time, airport ground personnel can use a simple smartphone app to detect broadcast signals from the operating legitimate drone, and view information including identity and location displayed on a map of the airport.

All these UTM attributes, when coordinated with ATM, provide a highly capable system for coordinating the operation of legitimate drones. Several major airports are experimenting with such UTM systems, but how do they enable ATM to identify illicit drones?

By using the ID and location data for legitimate drones taken from the UTM server, the C-UAS is able to validate its own target information, and determine how many drones are operating in the airspace and which are legitimate or illicit. This data can then be passed from the C-UAS system via an interface to ATM, giving ATM full situational awareness of all drones, legitimate and illicit, in the shared airspace.