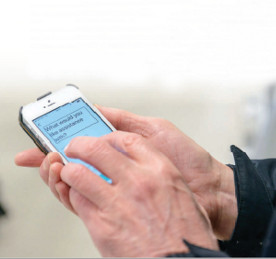 Slammed with the only ‘poor’ rating in the first UK Civil Aviation Authority (CAA) airport accessibility report, Edinburgh Airport made what was, in the circumstances, the only reasonable decision. “We had a huge two-day conference,” says CEO Gordon Dewar at Edinburgh Airport, swelling with what turns out to be quite justified pride. It was from that moment that his airport began to climb the rankings. Along with its close neighbour Glasgow, Edinburgh is currently the only facility with more than nine million yearly passengers and a ‘very good’ accessibility rating. Having first got there in 2017–18, it’s now the only one in that category to achieve the top rating in consecutive years.

When it was launched in 2015, the CAA’s regulatory performance framework, which is underpinned by EU law, was a world-first. The regulator aimed to address concerns that disabled people were flying much less frequently than other travellers, and its efforts have supported a record 3.7 million requests for assistance at UK airports through 2018, up from 2.7 million three years earlier. Since 2014, the increase in the number of travellers who received assistance has almost doubled overall passenger growth, up by 49% versus 25%.

Before the CAA instituted its rigorous programme of measurement, Edinburgh was aware of occasional failures from posts online and email complaints, but had yet to grasp the full scope of the problem, from its effects on airline’s on-time performance to passenger willingness to ever try air travel again. “What I would say, without a shadow of a doubt, is that the regulation forced us to measure it properly,” explains Dewar. “Once you have that data, you’re equipped to respond and you can decide the quality you want to provide.”

Thus what the CEO calls the “summit days”. He’s frank about the need for them in the aftermath of the poor rating: “There was real self-assessment and honesty that this wasn’t good enough, that we could not be proud of this. We needed to find people that could actually explain to us how we were perceived and how we were performing, to get in some expertise that could help us understand what equipment was out there, and how we could approach things differently.”

While the CAA mandates regular consultations with stakeholders, Edinburgh got into gear with something far more decisive, inviting a range of equipment suppliers, and representative disability and community groups to talk about the issues and guide operators through the possible solutions. “We really upped the game,” Dewar continues, “and that’s where we got huge buy-in from the airlines, who could see in very practical terms why this mattered and how it could be a lot better if we worked together.” If anything, that understates the importance of collaboration in delivering a truly accessible service. It’s the airlines that can collect vital information about passengers’ needs, because it’s the airlines that hold their bookings. Driving pre-notification, however, is a multistage, multipartner process. The 2015–16 report attributed Edinburgh’s rating to two principal factors: the poor performance of its assistance provider and the airport’s compounding failure to maintain proper oversight. After terminating that contract in March 2016, Dewar and his team became disillusioned with the idea of finding a turnkey solution to their issues, and decided to ‘step into the value chain’ with their new partner, Omniserv.

It was a defining choice. While assistance providers are specialists in airport accessibility, they lack the local resources, analytics skills and influence of the operators themselves. As Dewar cites his team’s lack of “visibility” over bookings with accessibility needs as a major reason for their poor performance in 2015–16, passenger pre-notification was the first place he felt the airport needed to “get under the bonnet” to drive performance and value. Having got their attention with the accessibility conference, Edinburgh increased its charges to airlines and heavily incentivised them to encourage passengers to identify their accessibility requirements prior to their arrival at the terminal.

“There was actually a very easy win in persuading people [that] we needed to invest a lot more,” explains Dewar. “We did significantly increase the pricing to the airlines, but we didn’t really get any pushback on it, and that was a fantastic alignment because we all recognised this wasn’t good enough and it wasn’t something we wanted to be associated with.”

From there, Edinburgh was able to use the extra information and funding to both develop a detailed resource plan that understood the peaks and troughs in demand for different types of service, and invest in the equipment and tools needed to meet them. In the initial stages, that meant extra hardware – more lifts and ambulances for use when resources are stretched, for instance, or better quality call points and reception areas for passengers in need of assistance – but over time it has helped the airport implement innovative software tools like 2018’s Welcome app. Developed by local company Neatebox, it takes pre-notification further by updating service providers about the approach and arrival of users with accessibility requirements, as well as allowing them to personalise the level of service they receive, so extra equipment isn’t unnecessarily diverted by the airport.

Dewar highlights the app’s benefits in terms of the efficiency gains of knowing specific requirements at specific times; the privacy that comes with passengers not having to make requests in a public space; and the simple ability to acknowledge that people are unique. “You don’t want to over-provide,” he ventures. “A lot of people just want some specific part of the service because they value their own independence. Being able to decline services is as important as being able to request them.”

However they’re selected, those services also need to be delivered in the right way. That’s the final area that Edinburgh stepped into to lift performance. Dewar calls it “the human touch”. Prior to the poor rating, he admits, the airport had struggled to recruit the right people to provide assistance for passengers with disabilities and mobility issues. As the operator began to realise how that was impacting service, it decided to institute a living wage policy. “Now we’re fishing in a different pool,” says Dewar, “and we’re much more competitive against alternative employment, which is important because it’s not an easy place to work: we have shift work, early morning starts and so on, and we recognise that.”

From there, the airport began investigating the specific workings of its recruitment policy for disability support staff. As the jobs themselves were outsourced to the service provider, which had little expertise in getting airside clearance for new starters, it often took upwards of four months between candidates receiving job offers and actually starting work – if they hadn’t found another job in the meantime. By taking that responsibility to its in-house specialists, Edinburgh cut the average waiting period to a month, enabling them to hang onto the best applicants and respond faster to any possible staffing shortfalls. Secondarily, by hosting job adverts on its own portal and under its own branding, the airport has also been able to appeal to a wider array of what Dewar believes are better-quality candidates, who often join from the hospitality sector. “Omniserv are fantastic,” he’s keen to stress, “and it’s no criticism, but they’re not a consumer brand and people don’t know who they are. We’ve got far better reach than they could ever achieve in the Scottish market.”

23%
Percentage of UK passengers, who said they had a disability, thought they would fly more often in the next year.
UK Aviation Consumer Survey

More than anything else, it’s that very airportappropriate ability to continually connect different stakeholders that has powered Edinburgh’s turnaround. Proud as he might be of what was achieved with the heady summit days, Dewar spends far longer discussing the “steady drumbeat of consultation” that proceeded from them. As mandated by the CAA framework, Edinburgh’s performance is monitored and commented on by an Airport Accessibility Forum, which is comprised of representatives from organisations like Spinal Injuries Scotland, Colostomy UK and the MS Society.

“It means we’re getting really, really direct feedback from representative groups that can speak much more capably and knowledgeably about the soft aspects of how we’re perceived, what parts of the service work and where we can make improvements,” Dewar enthuses. “We’ve got this really nice feedback loop where we’ve got a running action list of how we can make things better.” Moreover, it actually interlocks with the airport’s approach to consulting with its airlines, which Dewar describes in similar terms as a “forum within the airport where we’re feeding back how we can make improvements and the role of the airlines in doing so”.

One of the early accessibility forum recommendations that Dewar points to was a changing room for adults. Such a facility had never been mentioned in any regulatory guidance or terminal building standards, but was relatively simple to install in the next building project, and made a substantive improvement to many passengers’ travel experience. Similarly, by working with the CAA’s guidance on supporting passengers with hidden disabilities, the forum helped the airport become the third in the UK to win Autism Friendly accreditation through a programme of pre-visits, online video guides, quiet routes and special assistance lanes.

The last of those, in particular, is worth dwelling on. “We’re seeing that our family lane is fantastic for people that just need a little bit of assistance or reassurance,” Dewar explains. “The adjustments we’ve made and the additional services we offer are actually a really good standard for other groups, like people with young kids, or even just people that are taking a lot of complicated stuff with them.”

In fact, the success of the airport’s latest app-driven accessibility initiative, FetchyFox, which makes the terminal’s full range of dining options available to passengers who can’t otherwise access them, has led Dewar to consider a wider roll-out. “It’s really interesting,” he notes, “because people with restricted mobility were actually our target audience, but we’ve learned a lot about how that could be very useful to lots of people.”

Most of Europe’s airports weren’t originally designed with accessibility in mind. Many weren’t even designed for families, but Edinburgh’s success shows what can be achieved by reversing the model. By focusing on the people that find air travel the most difficult, airports can make it better for everyone.