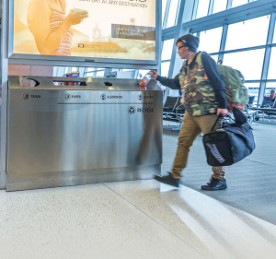 Looking at the pictures now and they could almost show a grand European train station, somewhere like Antwerp or Milan. The ceiling billows over starched tablecloths and men in suits lean nonchalantly against the bar. Art deco details are everywhere, from the sleek rectangular windows to the metallic sheen of the balcony. Elegance reigns. This is the Walnut Room, the most exclusive spot at Lakefront Airport and one of the best restaurants in New Orleans before the war.

Until the 1970s, when air travel was still the preserve of the wealthy, restaurants like the Walnut Room flourished across the US. At Albuquerque, passengers could enjoy a meal prepared by a famed European chef who had cut his teeth cooking for royalty. At Newark, diners found fine china, inventive menus and flambéed dishes (restaurateur Joseph H Baum had a penchant for the dramatic).

With customers paying 40% more for round trips than they do today, they wanted to be pampered, and airports obliged. Yet as the glamour of air travel wore off and flying became more common, these places mostly disappeared. Airport food these days matches the flying experience generally – quick and cheap.

But the airport dining experience is keeping pace with society in other ways too. While white tablecloths are out of fashion, climate change worries and environmentalism are forcing administrators to transform how their food is sourced and served. These forces are changing airport F&B just as surely as the sophisticates of the 1930s helped build the Walnut Room – and might even end up helping the planet.

What a load of rubbish

When he started at Seattle–Tacoma International (Sea-Tac) in 2003, Jeremy Webb worked at a very different airport. With fewer than 27 million annual passengers, his new employer lagged far behind competitors down the Pacific coast. But as Sea-Tac has prospered – welcoming around 50 million passengers in 2018 – Webb and his colleagues have become intensely aware of what that success means in terms of waste management. In 2016, after all, Sea-Tac produced 7,320t of rubbish, 87% of which came from concession stands, public areas and arriving passengers.

In one respect, finding a way to cope with the rubbish is simply a consequence of expansion.

“As the challenges have got larger, sustainability has increased,” says Webb, aviation environmental programme manager at the Port of Seattle.

Not that Sea-Tac is alone. With 4.5 billion passengers now checking in globally each year, the amount of waste airport officials have to cope with is beginning to gurgle by their ears.

This is especially true when it comes to food and beverage (F&B). According to a study by IATA, aircraft alone generated 5.7 million tonnes of waste in 2017. General statistics for airports are harder to come by, but they seem to struggle with rubbish just as much as Sea-Tac. Down the coast in San Francisco, for instance, the local airport generated 12,000t of solid waste in 2015–16 and each guest still generates half a pound of rubbish every time they travel.

Yet there is more to the current sustainability trend than just a pile-up in waste. As Webb explains, passengers across the planet have become “increasingly aware” of climate change and sustainability, and expect airports to assault them with green initiatives the moment they enter the terminal. The point is echoed half a world away by Ben Crowley, head of food and beverage at Heathrow.

“Across the F&B industry, we are also seeing a change in the expectations of our customers and wider stakeholders,” he says. “Our customers want to be able to make more sustainable choices during their time at Heathrow, including during their retail experience.”

Tugged by the twin ropes of swelling landfill sites and passenger expectations, airports are taking dramatic steps to sharpen sustainability. Sea-Tac announced an environmental strategy scheme a decade ago, and the Port of Seattle (which runs the airport) now spends $32.5 million each year on protecting the environment. Heathrow has similar plans. Two years ago the Heathrow 2.0 scheme was announced, which, according to Crowley, aims to “enhance the ethical and sustainable passenger experience at the airport”. Crowley and his colleagues eventually want Heathrow to be a “zero waste” airport.

“Across the F&B industry, we are also seeing a change in the expectations of our customers and wider stakeholders. Our customers want to be able to make more sustainable choices.”
Ben Crowley

Visit the Heathrow 2.0 website and you are struck with a shimmering barrage of promises. The airport aims to “plan for sustainable growth” and “tackle global challenges such as climate change”. However, as seductive as this kind of language can be, what does it mean for F&B sustainability in practice? In the case of Heathrow, the answer begins long before food even ends up on a plate. Earlier this year, the airport announced an ambitious strategy to only stock sustainable fish in its restaurants. Endangered species – sea bass, redfin tuna – are being dumped in favour of sustainable alternatives. Airport restaurants are also being encouraged to only source fish caught by poles and lines, which are far less destructive than net fishing. From there, Crowley explains, the airport has worked hard to shepherd customers into the conversation.

“All menus from Heathrow partners serving fish display the accreditation, making it clear to passengers that the fish is sourced sustainably,” he says. “We are continuing to support all our partners as they work towards making each fish type fully sustainable.”

Individual restaurants certainly seem to be taking the pledge seriously. For example, Carluccio’s has overhauled its menu to include sustainable crab and mussels. Meanwhile, Sea-Tac has yet to institute a sustainable fish plan of its own, but Webb agrees that the battle for F&B sustainability starts early. The airport is an active member of Salmon Safe, a Portland-based scheme to keep salmon runs clean. That is particularly important at Sea-Tac; the airport is surrounded by streams, all of which run into the salmon-rich Puget Sound.

“In terms of how that relates to F&B operators here in the terminal, it is sort of a disconnected driver, but we have designs to conserve water built into our facilities and all of our engineering behind the scenes,” Webb says.

Whatever the method, it seems clear that airports can push towards F&B sustainability even before passengers check in. However, as the revamped menu at Heathrow implies, real change is impossible without guests themselves. Sea-Tac has been especially active in this regard, installing water refill stations and places to recycle leftover drinks. The refill stations alone stop 10t of disposable plastic bottles ending up in landfill each year. More broadly, Webb adds, these campaigns are bolstered by an advertising blitz.

7,320t
The amount of rubbish produced in 2016 by Sea-Tac, 87% of which came from concession stands, public areas and arriving passengers.
Port of Seattle

For its part, Heathrow has fitted its terminals with over 100 water refill machines and has even developed an app to help customers find the nearest spot.

Given that passengers are ultimately the people actually eating and drinking at an airport – and the ones creating waste – these tactics seem sensible. Yet listen to Webb and Crowley for long, and it becomes obvious that airports run on far more than just passengers and staff. A whole ecosystem of suppliers and officials buzz around, and their involvement is key if airports are actually going to cut waste.

A case in point is how Sea-Tac deals with its rubbish. By working with a local food bank, the airport can now deliver 600 leftover meals a week to hungry neighbours, and by contracting recycling to the local government, Webb and his colleagues can offer “free composting to our food and beverage offerings”. No wonder Webb seems fairly confident his airport can convert 60% of its waste back into something useful by next year, up from 41% at present.

Webb is similarly buoyant about the industry in general. As climate change threatens the very survival of our species, he thinks “passenger expectations” will push cafés and restaurants to prove their commitment. Crowley agrees, suggesting that “as the understanding of the environmental and social impact of our day-to-day purchasing decisions continues to grow globally”, there will be an “increasing demand on airports” to act. Indeed, Heathrow is already striding forward with another batch of ideas, from cutting down on single-use plastics to stocking recyclable coffee cups.

The rarified atmosphere of the Walnut Room might never return, but modern airports seem on the verge of a culinary revolution all of their own.