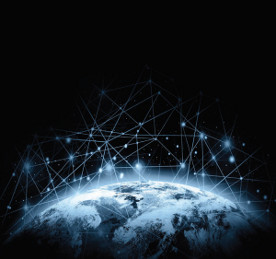 At the heart of the issue is communication. The exchange of voice and data between aircraft and ground is critical for aircraft operations in controlled airspace. Currently these exchanges rely heavily on ground-based radio and radar systems with limited bandwidth. That bandwidth will be saturated by 2030, inhibiting the communications that are so vital for safe management of air traffic and leading to delays on the ground and in the air.

Satellite-based systems are one way to help alleviate the pressure. Already used for some navigation and communication functions – especially across expansive oceans and remote areas – they are set to become a fundamental part of contemporary, interconnected ATM operations.

Satellites in space allow packets of data to be exchanged between aircraft and ground control centres, formally referred to as Air Navigation Service Providers (ANSPs), without the need for terrestrial systems. These data links provide faster and more accurate transmission of aircraft flight data, and will in time replace most two-way voice communications.

The Iris project is at the forefront of this step change. It was launched in 2008 with the aim of making aviation safer, greener and more efficient. It has since been fully integrated into the main Single European Sky ATM Research (SESAR) roadmap, which is Europe’s plan to radically update airspace control. The Iris team expects the system to be introduced following pre-operational flight trials in 2021, with full capability slated for 2028.

Paolo Burzigotti, acting Iris project manager, says the project, which is funded and promoted by ESA, is based on the Inmarsat SwiftBroadband-Safety (SB-S) technology already certified for oceanic use.

“That technology is being extended for use in continental airspace for advanced data link services as well as advanced Airline Operational Communications [AOC],” he says. “The Iris system is designed to become the Satellite Communications [SATCOM] element of the European Air Traffic Management Network [EATMN], complying with the requirements of Regulation EU 2018/1139 governing the interoperability between systems within the EATMN.”

Iris will be available via satellite-communication equipment already on many commercial aircraft. Inmarsat is ESA’s private partner in this public-private initiative, and the company’s SB-S avionics will provide high-speed secure gateways through which data will pass. Iris is designed to meet recent and stringent standards issued by the European Organisation for Civil Aviation Equipment (EUROCAE) and Radio Technical Commission for Aeronautics (RTCA) organisations ED-120 and DO-290, respectively.

In addition to meeting current operational functionality, Iris will also contribute to next-generation services, including support for initial 4D trajectory (i4D) management as defined by EUROCAE ED-228A and ED-229. i4D was first trialled in 2012 and allows aircraft to fly autonomously using pre-arranged times slots to arrive at designated ‘merge points’ without using traditional vector control methods. That technology has demonstrated impressive reductions in delays, conflicts with other aircraft and fuel consumption.

“Iris is a data-link system, as such enabling the effective introduction of i4D [trajectory-based] ATM services,” says Burzigotti. “This will allow for the better planning and monitoring of aircrafts’ real-time position, thus helping reducing CO2 emissions by optimising en-route trajectory and airport approach times. The pre-operational commercial flights of Iris will include i4D applications for testing purposes – its uptake will depend on ANSP’s evaluation.”

There are also significant safety benefits. “The uptake of DLS will play a key role in safety as it will reduce the reliance of voice communications between controller and pilot – and we know voice can be critical in stressful situations,” says Burzigotti. “Iris can deliver DLS services not only in continental airspace but also in oceanic regions through a single technology. It can help offload crowded areas from VHF datalink Mode 2 [VDL2] and it can deliver a lot more bandwidth then terrestrial technology – all these factors will definitively improve overall safety.”

The next phases of the project centre on validating the system in operational environments. “The main validation targets of the pre-operational commercial flights include Iris operational capability assessment to provide ATC services around the clock throughout European airspace covered by participating ANSPs,” Burzigotti says. “The flights are going to be performed with the actual end-to-end system in operational scenarios defined with the participating airlines and performed during commercial flights. The flights included are defined and performed in collaboration with our institutional partners SESAR and EASA. During this period, a set of data will be collected and monitored by the EUROCONTROL Network Manager for an assessment of Iris’s performances and compliance with aviation regulations for DLS.”

Although Iris is a European initiative, the technology could be used in airspaces around the world.

“Iris, as a SATCOM-based DLS solution, is fully in line with SESAR initiative, but is not limited to just a European environment,” Burzigotti explains. “As the satellite constellation used has a worldwide coverage, the Iris infrastructure is potentially ready for a worldwide extension. Most Asian airspace has no DLS services in continental space, so these countries will have to decide which technology to embrace to implement. Satcom is a key candidate and our future plans are to facilitate the uptake of Iris technology and solutions beyond European skies.”

The Iris system has been designed to reduce the need for major updates to ATM centres, as well as to minimise expensive hardware and software upgrades for use in aircraft.

“Iris will not affect operations and air traffic centres,” Burzigotti states. “Iris is a means to provide data communications between pilots and air traffic controllers – it is completely transparent to the applications used by the intended users.”

Although Iris is designed to support Aeronautical Telecommunication Network (ANT)-B1 and B2 applications and trajectory-based operations from the outset, there remains differing levels of maturity of ANSP infrastructure in Europe. Progress in updating this infrastructure will therefore determine when the advantages of satellite data-link services can be fully exploited across the whole region. But will the satellite gateways on which the new DLS are reliant be able to keep pace with growth in air traffic and the subsequent volume of messages? Burzigotti believes it will.

“The SATCOM constellation on which Iris is based has enough capacity to cope with traffic growth as currently forecast,” he says. “Flight increase is based on forecasts, which are in turn based on assumptions that need to be confirmed by reality. Obviously, should the use rate increase dramatically, then new space capacity will be needed. We are looking at these factors and getting ready for these possibilities in conjunction with existing infrastructure.”

As with all contemporary transport systems, the designers and future operators of Iris have had to address security concerns. “During systemarchitecture definition of Iris we have had a lot of discussion with key aviation stakeholders to identify the main drivers that would make Iris a success story,” says Burzigotti. “Security has come up high in the list – and it has required a lot of work. We have had a lot of interactions with air-framers and terminal manufacturers to arrive at a design that is solid and as resilient as possible when it comes to malicious attacks.”

Iris uses virtual private networks (VPNs) and other technologies to ensure data segregation where needed and carries out authentication to ensure data integrity is maintained. The link between flight-management systems and ground-control equipment is also secure.

Today, Iris represents the most promising option in terms of performance and operational availability to alleviate pressure on existing terrestrial infrastructure. It also acts as a bridge to a future that will see autonomy and inter-connectivity guiding our aircraft.