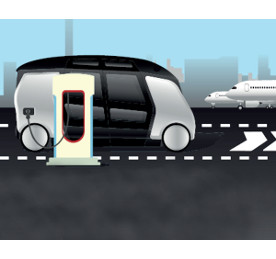 Given the close scrutiny the aviation industry faces over its contribution to carbon emissions, a climate-conscious airport may seem like an oxymoron. But as global appetite for air travel shows no signs of decreasing – quite the opposite in fact – the challenge is on to make every aspect of operations as green as possible.

“We fundamentally believe that people still want to fly, for lots of valid reasons,” says Dave Lees, CEO of Bristol Airport. “But at the same time, we readily accept the challenge and accept that global warming really is taking place. Therefore, we need to act in a responsible way to achieve both of those aims, in as quick a manner as we possibly can.” It’s a riddle that has to be solved – especially as Bristol has faced criticism over a planned expansion that would see passenger numbers rise to 12 million a year.

While the carbon emissions of airports are tiny when compared with airlines, there is still much that can be done. In the past four years, Bristol has reduced carbon emissions in its control by 12% and, as of October 2019, uses electricity solely from renewable sources. The three-year agreement with renewable energy supplier Ørsted will save an estimated 14,000t of carbon.

Bristol has committed to a carbon roadmap that covers aspects the airport can influence as well as those under its direct control. For the former, it is supporting initiatives such as the Carbon Offsetting and Reduction Scheme for International Aviation (CORSIA) and encouraging carbon-friendly travel to and from the airport. For the latter, the switch to 100% renewable electricity is the first step towards a more ambitious target. “We want to be carbon-neutral by 2025, net carbon zero by no later than 2050,” Lees says.

This includes the generation of energy on-site. Already, 5% of Bristol’s electricity comes from solar panels installed at the airport, and this is set to increase to 25% by 2025. The provision of fixed electrical ground power for aircraft during cleaning and boarding is also important – this cuts emissions by using electricity straight from the grid rather than from an auxiliary power unit.

Bristol’s vehicles account for 0.81 kilotonnes of carbon emissions under the airport’s direct control, so the overhaul of the fleet to more eco-friendly versions is a main priority. “We’re just undertaking a review of our fleet and our fleet-purchasing strategy for the future, with a real focus on passengercarrying vehicles, particularly buses, in terms of progressing forward to either biodiesel, or moving straight to electrification of vehicles,” Lees says.

Environmental improvement is also on the agenda at Hollywood Burbank; the airport, along with others in Southern California, has voted in favour of establishing a voluntary memorandum of understanding with the South Coast Air Quality Management District (AQMD) and is working on fulfilling an air quality improvement plan (AQIP) to reduce emissions.

A key part of this plan is a commitment to convert all light duty vehicles and 50% of the medium and heavy-duty fleet to electric by 2031. “We’re calling it the clean fleet programme policy,” says Patrick Lammerding, deputy executive director of planning and development at Hollywood Burbank.

“The actual target that we have in the AQIP is that we will voluntarily increase the purchase of electric vehicle sedans, medium and heavy-duty vehicles, and commit to all-new sedan purchases of the electric vehicles starting in 2021, and convert all sedan fleets to be electric vehicles by 2023,” he explains. “That’s our very specific, ‘here’s what we’re going to do right now’, in advance of the 2031 date.”

While moving to the electrification of airside vehicles is a must in order to meet emission targets, it is imperative that the level of service they provide is the same, or better, than their predecessors. This requires careful assessment of the requirements of each vehicle. “We really need to be honest about what we use these vehicles for,” Lammerding says. “What’s interesting is, as we anticipate things like airport operations vehicles – I used to do airport operations early in my career, and I know from then – people don’t realise how many miles they do.” Electric vehicles must be robust and have the necessary miles per charge to cope with the airport environment.

Maintaining functionality also means that the support required to keep electric vehicles running needs to be in place. This includes not only charging stations built across the airport estate, but also the skills to service and maintain new systems when the move is made away from fossil fuel-powered vehicles with combustion engines. “One of the challenges is ensuring that you’ve actually got the right staff to be able to service vehicles,” Lees points out.

“We’re just undertaking a review of our fleet and our fleet-purchasing strategy for the future, with a real focus on passenger carrying vehicles, particularly buses, in terms of progressing forward to either biodiesel, or moving straight to electrification of vehicles.”
David Lees

The fleet replacement at Bristol also includes a skills development programme to ensure the airport’s mechanics have the qualifications to deal with the new vehicles. “That’s one of the key considerations, to ensure that we actually have got the right skill set to be able to maintain the vehicles on an ongoing basis,” Lees says. “You can’t go into this lightly,” he continues. “You’ve got to make sure that the level of service is commensurate with at least what we’ve achieved in terms of vehicle serviceability at the moment.”

The relative novelty of electric vehicles can also be an issue in their integration. While the technology for electric cars is now mainstream, replacing more dedicated airside vehicles is trickier. “It’s going to be challenging for some of the most specialist items and pieces of equipment,” Lees says. “I’m thinking here particularly of the specialist equipment for firefighting, for instance, which require very quick response times. And specialist equipment, for instance, for snow clearing.”

Lammerding agrees, explaining that while vehicles such as the airport authority sedans are fairly easy to convert to electric, this is more difficult for others. “The other vehicles though, the airport operations, maintenance, firefighting, police, those vehicles are going to take a little longer to get to, particularly things like firefighting vehicles and maintenance vehicles that need a bit more horsepower,” he says. Safety vehicles, such as police or fire, are not included in the draft AQIP made available in September 2019.

In some cases, Hollywood Burbank simply has to wait for more efficient or specialised clean vehicles to become available. “2031 seems like a long date for 100% conversion [for the light vehicles] but we are anticipating technology that isn’t on the market,” Lammerding says. “Maybe it exists, but the vehicles aren’t on the market today.”

The target of 50% conversion for medium and heavy-duty vehicles by 2031 at Hollywood Burbank was made with these limitations in mind. “Again, that’s because they don’t exist on the market yet, so we’re anticipating that they will,” Lammerding says. “We don’t want to commit to 100% of those, but we’re saying we will commit to 50% of that. Of course, if it’s the case that we get there and they’re available, we’ll exceed that.”

Lack of available technology is a problem when awareness of the scale of the climate crisis and corresponding public pressure is growing; a protest against expansion at Bristol in September closed roads around the airport. Prompt action is vital.

“I suppose the challenge though is [that] the requirements of the wider society are increasing faster than technology is advancing,” Lees says. “So while we’re pleased, we’re aware that, actually, this is a moving target, and hence why we moved forward our carbon neutrality target by five years; which is, in effect, driving us to greater levels of ambition and quicker levels of adoption of electric vehicles, and also sourcing of renewable energy on-site, from solar – quicker than what we had originally planned to do.”

Any progress towards environmentally friendly operations is good, and electrification of vehicles is a welcome step. Airports must accept the need to act with alacrity on this momentous issue.

Airlines to offset emissions with CORSIA

CORSIA has been established by the International Civil Aviation Organization (ICAO) with the intention of stabilising the aviation industry’s CO2 emissions at 2020 levels. It was adopted as Annex 16, volume IV, to the Chicago Convention in 2018, and the requirements for the airlines of ICAO’s member states have already begun: from the beginning of 2019, carriers with yearly emissions of over 10,000t have been obligated to provide annual reports on their CO2 emissions from international flights.

Airlines will use carbon offsetting to mitigate further growth, buying emissions units from a selection overseen by ICAO that will support sustainable development. This will begin in 2021.While it only applies to international flights, it is estimated that CORSIA will offset around 2.5 billion tonnes of CO2 in the period from 2021 to 2035.

CORSIA was a topic of discussion at the International Air Transport Association (IATA) annual general meeting, held in Seoul in June 2019. “The IATA AGM has reaffirmed the support for the ICAO CORSIA scheme,” said Michael Gill, IATA’s director of aviation environment. “They’ve confirmed the commitment of all airlines to move ahead with the monitoring and reporting of their emissions under the CORSIA scheme.”