Often regarded as a costly nuisance by customers, car parking is a crucial source of revenue for airports. Two novel approaches towards automating the process, however, seek to introduce new efficiencies and cut emissions while improving customer satisfaction. Irenie Forshaw talks to Kyle Sundin, manager of airport car parking at the Port Authority of New York and New Jersey; Gary Wallace, head of car parks and commercial products at Gatwick Airport; and Nick Caunter, chairman of the Independent Airport Car Parking Association, about the latest developments occurring in the airport parking space.

Notoriously expensive, airport car parking is a lucrative business of which rogue traders are keen to take advantage. Early in 2019, the con man behind a £1m illegal-parking scheme was jailed after tricking unsuspecting customers into thinking they had paid for secure parking, when in reality their vehicles had been dumped in muddy fields or hidden in bushes near Gatwick Airport.

Then there are the passengers that seek to avoid using airport car parks altogether. Fed-up residents that live near to major hubs have called for crackdowns on vehicles left for weeks outside their homes to avoid expensive parking charges. One angry local took matters into their own hands on discovering a car left on a roadside near Bristol Airport. Egged and wrapped in cling film, a note on the offending vehicle's windscreen read, ‘If you can afford a holiday, you can afford parking’.

Make the most of what you have

For Gary Wallace, head of car parks and commercial products at Gatwick, bad PR is something he is only too familiar with. “We are conscious of the impact on the airport's reputation,” he says. “A number of years ago we introduced our ‘approved operator scheme’, which gives customers the ability to distinguish between the reputable end of the market and those that don’t participate, and are therefore a risk.”

Despite seeing recent short-term declines in parking demand at Gatwick as a result of Brexit, the collapse of travel agents and Covid-19, the broad trend over the past ten years is towards increasing passenger numbers, which is leading to a decrease in the amount of available space to park.

With over 40,000 existing public car parking spaces, room for expansion is of particular concern for Wallace and his colleagues. “How to grow traffic at the airport and grow parking capacity in tandem, but without the need to go out and acquire new land, was a key focus for us,” he explains.

As well as maximising limited available space, the airport car park industry must adapt to shifting consumer demands. “From a customer perspective, they always have escalating requirements,” says Nick Caunter, chairman of the Independent Airport Car Parking Association. “Everything needs to be easier, slicker and faster. A lot of that is about improving infrastructure.”

Keen to make the most of recent technological innovations, Wallace and his colleagues decided to trial Stanley Robotics’ unique take on valet parking. Instead of allowing passengers to roam around the airport car park searching desperately for a space, the system sees them drive into a private garage, unload their luggage, exit their vehicle and watch as ‘Stan’ the robotic forklift slides underneath the wheels and gently lifts the car to a secure storage location. Connected to real-time flight information, the robot returns the vehicle shortly after its owners walk through the arrivals gate.

“What attracted us to the concept was the fact that you could get about 50% more cars parked in a given area of land with this technology than you can with customers parking themselves,” explains Wallace, who had observed the system being successfully operated at Lyon Airport. A few months after the company signed a framework contract at Gatwick, its existing agreement with the French hub was modified to increase the number of robotic parking spaces from 500 to 2,000 for summer 2020.

Although there are significant investment costs when it comes to the system’s installation, operation and maintenance, Wallace believes that the service is a big improvement on the regular long-stay car parking experience for customers. “When people drop their car off, they can walk to the terminal instead of having to take the bus,” he explains. “This is a big advantage, as is parking in a relatively spacious private garage as opposed to a fairly constrained regular parking space. It’s a much nicer experience all round.”

Gatwick launched the robotic valet parking service to the public just days before London went into lockdown, forcing it to pause the trial. “We’re hopeful that we can restart it later in the year, but everything just depends on the broader question of how the aviation market recovers,” says Wallace. “I think it’s inevitable that any capital expenditure projects are likely to be delayed because the airport market is going to have much smaller traffic than before, which means space won’t be as premium in the short term.”

Like Wallace, Kyle Sundin, manager of airport car parking at the Port Authority of New York and New Jersey, has seen a degradation of market share for airport car parking in recent years. “Probably the greatest challenge facing our industry is its declining mode share as related to how people access airports,” he explains. “With the advent of transportation network companies, parking lot usage has declined.”

“The airport car parking industry has fallen behind with regard to customer experience. New technologies and amenities have skipped over the parking experience until only recently and car parks have a lot of catching up to do.”
Kyle Sundin

Sundin is also keenly aware of changing consumer demands. “The airport car parking industry has fallen behind with regard to customer experience,” he says. “New technologies and amenities have skipped over the parking experience until only recently, and car parks have a lot of catching up to do.”

With this in mind, in 2016 the New York Port Authority took on the mammoth task of replacing its ageing 3M Parking Access and Revenue Control System (PARCS) at John F Kennedy International, La Guardia Airport and Newark Liberty International, in the largest such modernisation project ever undertaken. “We saw the opportunity to upgrade to a world-class system that would both allow for a better customer experience, while increasing efficiencies to lower operating costs,” explains Sundin. The chosen DESIGNA PARCS solution was integrated with the AeroParker Online Booking System, which allows parking to be sold online up to a year in advance. “Upon entry and exit, the License Plate Recognition reads the customer’s plate and allows them entry into the lot, allowing for a frictionless parking experience,” says Sundin. The new system also allows for E-Z pass functionality and multiple electronic payment options, including Apple Pay and Google Wallet.

“I think the thing that will be a real gamechanger is that, as the technology matures and the use of it increases, you would expect the cost to reduce.”
Gary Wallace

For Sundin, Covid-19 did not impact contractor installation of the new PARCS, but it did slow down Port Authority’s approval processes as many employees were working remotely. “The last parking lot to get the new PARCS is the employee parking lot at JFK,” he says. “The final approvals were recently granted and we expect to make the June 2020 scheduled completion date.”

Paused by the pandemic

Caunter agrees that automation projects are likely to slow down initially in the face of the coronavirus crisis. “The market is going to be substantially reduced for two or three years and so a smaller team will be able to cope,” he explains. “Technological developments will pick up again when the volume is pushed back to be near capacity.” With a couple of exceptions, all exit lanes at Port Authority airports are now automated and cashless. “We view these as being critical in resumption of services in a post- Covid environment,” says Sundin. “As customer demand for parking fluctuates in the coming months, it will be very easy for the Port Authority to effectively serve customers. The new system will also be able to integrate with emerging technologies for use in our airports.”

Looking to the future, Wallace believes automation will continue to play an increasingly important role in the airport car parking industry. “I think the thing that will be a real game-changer is that, as the technology matures and the use of it increases, you would expect the cost to reduce,” he says. “When the price comes down, the economics start to look a lot more favourable for a much wider range of agents and businesses.”

While having a robot park your car may already seem like a novel idea, Wallace envisages a world in which cars do not even need a machine to move them, as they can drive themselves. “There’s a view in the industry that there will be a phase in maybe ten years’ time where cars have enough technology to drive and park themselves but aren’t yet allowed on the road,” he says. “I think the view of car manufacturers is that they can see this happening in car parks in reality in the future, whereas cars driving around the streets of London on their own still feels somewhat like science fiction at the moment.”

Whether this will happen remains to be seen. What is clear is that something needs to change. Customers have grown tired of using outdated systems that no longer serve their needs. Gatwick, New York and Lyon airports are leading the way in embracing new automated approaches to car parking. Others are sure to follow. 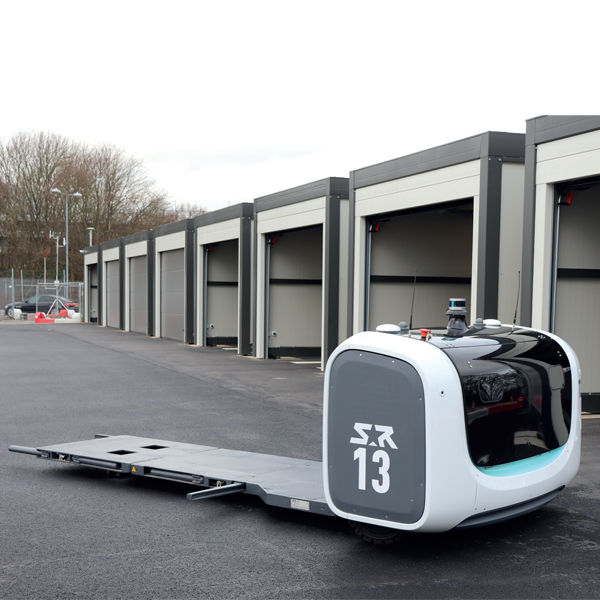 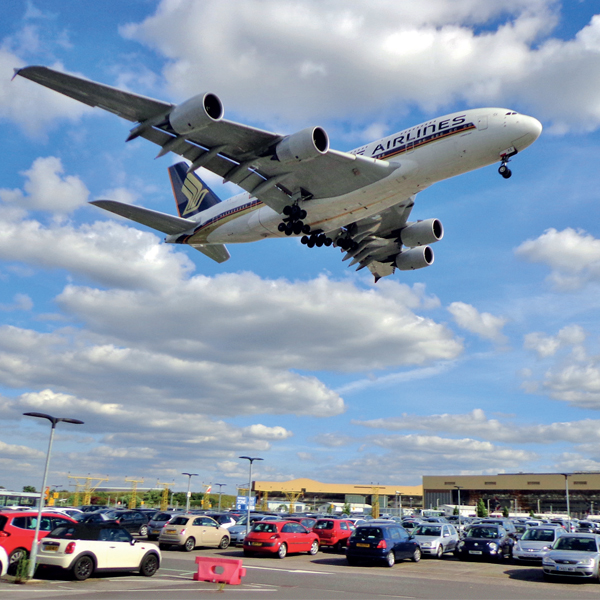 A Singapore Airlines aircraft flies over a car park at London’s Heathrow Airport. 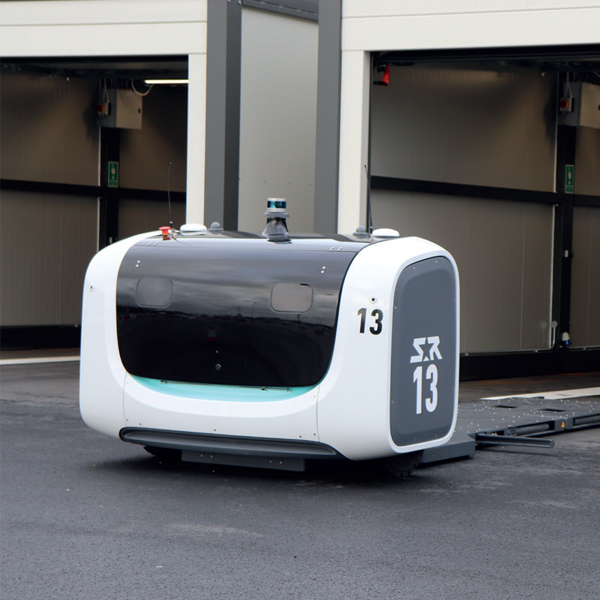 The Stanley Robotics forklift removes cars to a secure storage location, using real-time flight information to return the vehicle shortly after its owners land back at the airport.
Post to: