Air traffic across the Atlantic was devastated during the pandemic thanks to US travel restrictions and pervasive national lockdowns across Europe. Now, airlines are urging governments on both sides of the pond to adopt new measures to protect this valuable flight path, while they tighten in-house hygiene measures to boost passengers’ confidence. Kerry Taylor-Smith talks to John Grant, executive vice-president of the Official Aviation Guide; Juha Jarvinen, CEO of Virgin Atlantic; and American Airlines spokesperson Nichelle Barrett, about what it will take to trigger a recovery in the transatlantic market.

As the aircraft makes its final descent into John F Kennedy International Airport, any passengers lucky enough to have landed a window seat will observe the wakes of many hundreds of cargo ships, fishing boats and pleasure craft plying the seas off Long Island. A mirror image of this scene is witnessed, in turn, by anyone who chooses to cast their eyes upward from the decks of those vessels to the Atlantic skies, scored by flimsy flying machines that drag behind them long and wispy lines of white through endless blue.

In March 2020 these vapour trails – hallmarks of a thriving transatlantic travel economy – began to fade away. The Covid-19 pandemic saw national lockdowns instituted across the globe and movement between countries grind to a halt. Six months later, the air travel sector has yet to fully recover. While domestic flights have resumed in many countries, the industry is keen to reconnect Europe, Africa and the Middle East with the Americas by restoring flights across the Atlantic – their argument being that the transatlantic route not only binds two continents together, but unites the globe.

“For scheduled airlines, the transatlantic market is jaw-droppingly important,” says John Grant, executive vice-president of the Official Aviation Guide, a leading global travel data provider. “Every day in a ‘normal’ world, some $45m of revenue is generated across the Atlantic, and that has all but stopped.”

“The US is the UK’s most important economic partner – for exports, inward investment and inbound tourism,” adds Juha Jarvinen, chief commercial officer of Virgin Atlantic. Trade between the two countries is worth over $262bn and accounts for 15% of all UK trade; around $50bn worth of goods make the journey by air each year.

The transatlantic route is heavily reliant on business class traffic, but during the peak of the pandemic the only people travelling were those considered essential workers or undergoing repatriation, rather than business passengers. The route accounts for 70% of Virgin Atlantic’s network, and the reduced demand from business and leisure passengers meant it didn’t operate any scheduled passenger flights for 90 days from the end of April. Instead, between April and September, the company ran 2,600 cargo-only flights across the Atlantic to help keep global supply chains moving and transport vital PPE supplies to support front-line health workers. “It is a remarkable achievement if you consider that we hadn’t operated a single cargo-only flight until March 2020,” Jarvinen says.

Grant estimates the current global capacity is approximately half of that experienced this time last year, with demand between 30–40% of that seen in the same week last year. DAA, which manages Dublin Airport, recorded 11,000 passengers travelling between Ireland and destinations in North America in June 2020, down 98% on 2019 figures. Aer Lingus, which operates flights from Dublin to Boston, Chicago and New York, saw a dramatic drop in numbers, with less than 10% of their normal level of passengers in July, and several flights with fewer than 20 customers on board.

It’s not expected that the transatlantic market will recover quickly, says Grant. “Many of those routes require connecting traffic and that has just gone. Corporate demand is dependent upon companies allowing employees to travel and any risk assessment would prevent that from happening at the moment,” he says. “And then, of course, video conferencing has become an acceptable alternate for many.”

Border closures and quarantine measures – which have been in place far longer than anyone expected – mean the market is unlikely to bounce back any time soon. The ban on foreign nationals entering the US if they’ve been in one or more specific European countries during the previous 14 days remains in place for now and, although restrictions across Europe are more relaxed, the UK government requires travellers from many countries, including the US, to quarantine for 14 days upon arrival (or just five if they’re prepared to pay for a private Covid-19 test.). This means, in effect, that transatlantic passengers must adhere to self-isolation rules on both sides of the pond.

“Passengers, and particularly business travellers, cannot accept that condition to travel,” says Grant. “If these markets were to open overnight, there will not be an overnight recovery in demand. Travellers have been spooked and will not risk exposing themselves to what will still be perceived as a higher-than-normal risk.”

“For scheduled airlines, the transatlantic market is jaw-droppingly important. Every day in a ‘normal’ world, some $45m of revenue is generated across the Atlantic, and that has all but stopped.”

Even when routes reopen, demand from business and leisure passengers is likely to be low as people consider whether they really need to travel. Airlines have already adapted scheduling to meet customer demands and, although domestic flights are slowly increasing, adding capacity to the transatlantic routes is likely to be much slower.

In September Virgin Atlantic resumed daily flights from Heathrow to New York and Los Angeles, and to Miami and Atlanta three times a week; the carrier aims to restart further routes throughout the year, followed by an additional, gradual recovery through 2021 depending on demand.

“These services enable essential journeys for US and UK citizens and keep global supply chains moving with cargo on board, but we expect to operate, at best, only about 25% of our 2019 capacity by the end of this year,” explains Jarvinen. This combination of cargo and modest load factors has enabled Virgin Atlantic to operate cash-positive flying, he adds.

“Our commitment is to ensure every single customer flies safe and well, and returns to the skies with us with confidence. We have adopted a comprehensive and multilayered approach to public health measures, from check-in to boarding and on board to arrival.”

In addition to adapting their schedules, airlines have had to rethink cleaning regimes and on board – and airport – safety procedures with the aim of reassuring passengers and boosting confidence.

“We have implemented several new safety measures, including mask requirements and enhanced cleaning procedures throughout the customer journey,” states Barrett. Other procedures implemented by American Airlines include use of a long-lasting electrostatic spraying solution that has been specifically designed to prevent the spread of coronavirus, enhanced aircraft cleaning before every mainline flight, and an even-deeper overnight cleaning, including cleaning seat buckles, seats, tray tables and a number of other surfaces by hand.

Similarly, Virgin Atlantic aircraft are cleaned and electrostatically sprayed with high-grade disinfectant, and masks are required by customers and crew for the duration of the flight. Passengers receive a health pack on board containing PPE, and all air on board is filtered through high-efficiency particulate air filters to remove dust, allergens, bacteria, viruses and other particles from cabin air, refreshing it completely every few minutes.

“Our commitment is to ensure every single customer flies safe and well, and returns to the skies with us with confidence,” says Jarvinen. “We have adopted a comprehensive and multilayered approach to public health measures, from check-in to boarding and on board to arrival.”

These measures include a proactive health screening and temperature checks at the airport, reminders to socially distance and use hand sanitizer at check-in and gate areas, online checkin, smaller boarding groups and meticulous cleaning in all areas of the airport. Virgin Atlantic’s approach is the visible manifestation of months of resolve by the airline to keep staff and passengers safe and well protected.

There’s still more to be done to restore flights between the UK and the US, which is essential for the former’s economic recovery and the successful revival of the aviation industry. Even so, regulators and governments on both sides of the Atlantic have to agree and work towards the common goal. Several airlines are in favour of a joined-up testing programme, with American Airlines, British Airways and United Airlines all launching their own rapid testing regimes for transatlantic flights in November. Travellers from high-risk countries must take the test upon arrival at all major airports, although they still need to isolate for 14 days upon arrival in the UK.

“We continue to work with the industry to urge both UK and US governments to introduce robust passenger testing regimes to lift travel restrictions while protecting public health,” explains Jarvinen. “That is the only way to support free-flowing trade and tourism which is so vital for the UK, given the US is our most important economic partner.”

It’s going to take a truly collaborative effort to safeguard the transatlantic route; governments, regulators and airlines must all agree on the best way to proceed to guarantee its future. The route not only unites friends and families across the globe – economies rely on it for trade, investment and tourism. The market will only recover once passenger confidence improves. It remains to be seen whether that will come as a result of the tireless work of airlines and airports in tightening their in-house hygiene rules, or the development of an efficient testing regime on both sides of the route – or a workable vaccine.

Predicted capacity of Virgin Atlantic’s flights by the end of 2020 compared with last year. 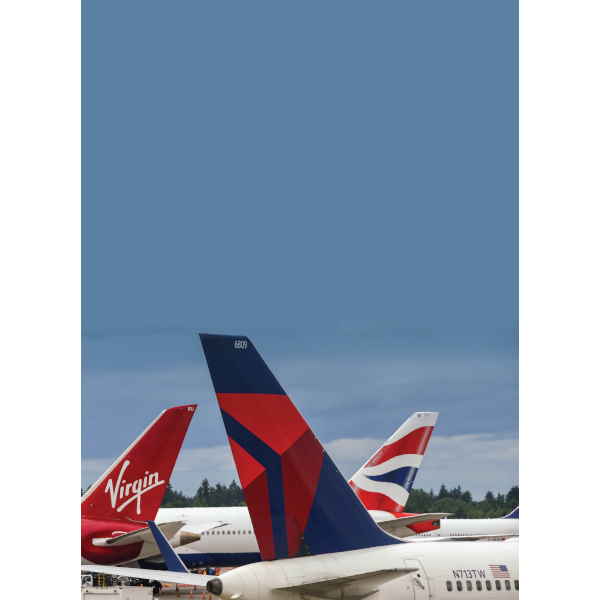 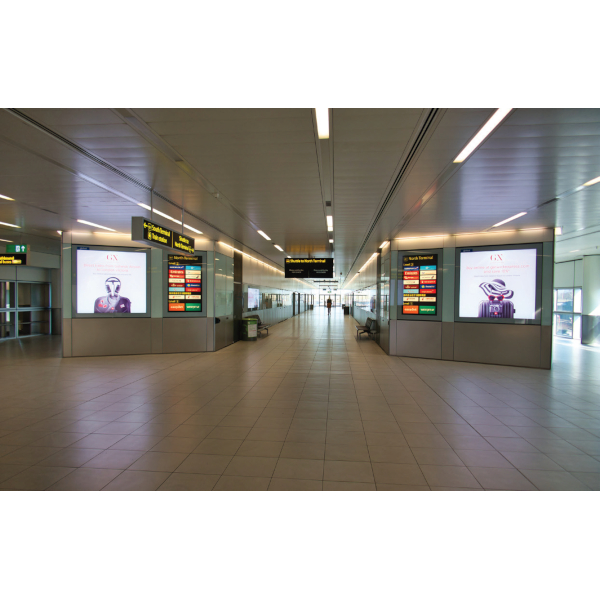 The entrance to the shuttle at Gatwick Airport in March 2020 – left almost deserted due to lockdown. 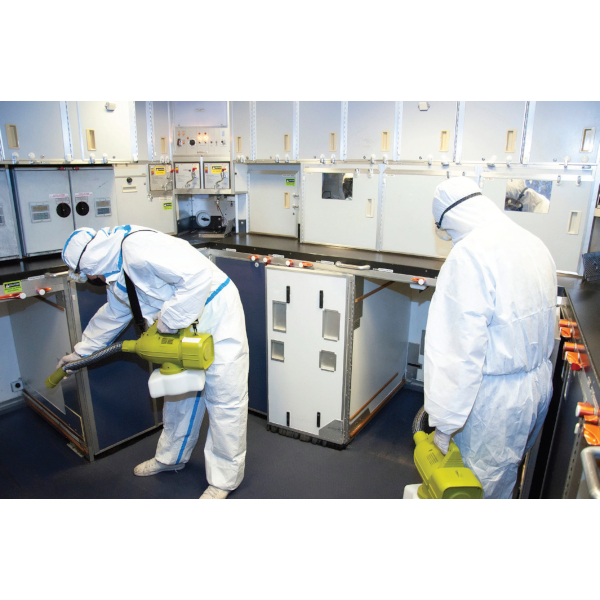 Airlines have urged the UK and US governments to introduce robust passenger testing regimes to lift travel restrictions and protect public health.
Post to: