The Covid-19 pandemic has forced airports to consider how the virus could be transmitted in the terminal space – and, from there, into new locations all around the world. Preventing unnecessary contact between passengers and surfaces, however, could go a long way towards mitigating its spread. Andrea Valentino talks to Brede Nielsen, group chief information officer at Avinor, and Antoine Rostworowski, deputy director-general of Airports Council International, about the new technologies and processes making touchless travel a reality.

Those old enough to remember the so-called ‘golden age’ of air travel – which ended, more or less, in January 2020 – can probably recall just how flashy it felt. Whether you were in Doha or Newark, the moment you passed through security meant being faced with an expansive hall of consumerism, from bars to restaurants and gift shops selling T-shirts. To put it another way, until very recently, the airport experience was fundamentally centred around eating, drinking and making merry with the last few notes of local currency.

Whatever happens to the airline industry, this old world is probably gone forever. With social distancing the order of the day, and the pandemic offering a sixmonth object lesson on how quickly deadly viruses can spread, places now have to be sterile. Yet of all our public forums, airports are arguably one of the riskiest. Before Covid-19 struck, busy hubs like London Heathrow crowded over 200,000 people together every single day – and each one of them could spread the next pandemic with a cough or a sneeze.

How, then, do airports plan to keep their passengers safe in this new world? Strict rules around cleaning and social distancing are one matter, of course. But, more fundamentally, some airports are wondering whether they can remove even more risk and make the whole journey from the taxi rank to the departure gate completely touchless. There’s a way to go yet, but success could mean a far safer airport experience.

Brede Nielsen has had airport hygiene on his mind for years. The group CIO of Norwegian state aviation company Avinor since 2013, he says that, even before the crisis of the past few months, he and his colleagues had “always been concerned with cleanliness, and worked hard to build a reputation that our airports are perceived as clean and inviting”. This is no surprise: although it may be quieter than Heathrow, Oslo hosted a total of 28.6 million passengers last year, flying to 26 domestic and 155 international destinations.

As such, one must consider the potential for infection from unclean surfaces, even in small Scandinavian airports. You arrive and hand your passport over at the check-in desk. That’s one touch. Then you pass over your suitcase. That’s two. Then you wander over to security and take a plastic tray. That’s a third. Then you go and buy a coffee, handing over your spare change to the barista. That’s another. Then you pop to the bathroom, turning the lock in your cubicle. And so on.

Focusing on the ubiquity of touchpoints across the terminal – and the potential for each and every one as a transmission vector – is not only the preserve of tidy Norwegian airports. That’s especially true in East Asia, which was shocked into action nearly two decades ago by the Sars epidemic. Back in 2017, for example, Tokyo Hanada sent Haruko Niitsu, a particularly tenacious cleaner at the airport, over to Taiwan to give lessons in hygiene. Elsewhere, the Hong Kong Airport Authority last year installed over 120 disinfectant facilities in terminal buildings after a measles outbreak in the city.

Still, you get the sense that even as airports have worked on their cleanliness protocols for years, the pandemic does pose major new problems. That probably begins with the illness itself. Able to survive on surfaces for up to 72 hours, Covid-19 can be more dangerous for far longer than other infections. Common cold viruses, for example, are generally only infectious on surfaces for 24 hours. And given one precoronavirus study found that viruses were present on a worrying 10% of surfaces at Helsinki Airport, you have to wonder how high that number is now.

Beyond questions of biology, however, there are challenges of equipment. From PPE to healthscreening machines to separation screens, airports have a daunting shopping list. And, as Antoine Rostworowski, deputy director-general at Airports Council International, notes, “additional requirements for health” come at a cost, especially for organisations already reeling from disastrous balance sheets. According to official statistics, retail revenue at Heathrow collapsed by 55% in the six months prior to July 2020, with total income down 85%. These eyewatering figures are typical of airports everywhere, with Nielsen describing how declining revenues severely impacted Avinor and its 44 Norwegian airports. The group reported in early September that passenger traffic was down 79.8% compared with 2019.

On the day Norway’s airports closed to foreigners, Nielsen says he and his team were lost. “We sat in a void,” he remembers – but, pretty soon, the fog would clear. Within a few hours, a suggestion from a colleague would spur Nielsen to action: touchless travel. And why not? Though he admits that its hygiene benefits only became obvious after the pandemic began, Nielsen explains that it’s a concept he’s been mulling over for years. “To be completely honest, we have spoken a lot about touchless travel ahead of the pandemic, but from an efficiency perspective.”

Yet as his team got to work, Nielsen emphasised that, with the industry being what it was, adopting the dream of touchless travel would have to be done on the cheap. “The focus was to utilise our existing infrastructure and technology with minor changes.” All the same, what Avinor managed over just three months still feels impressive. As the name suggests, the new system removes physical contact from swathes of the passenger experience, avoiding the need to touch potentially infectious surfaces. That begins in the departure hall, with modified check-in desks that let flyers scan their travel documents from their phone. From there, they can scan their suitcases on one of dozens of homemade racks, each one manufactured by Avinor staff from personal 3D printers at home.

Apart from conjuring striking images of officials crouched over their printers like medieval craftsmen, this homespun approach may speak to what Rostworowski calls the “opportunity” of the pandemic. “The crisis may offer a catalyst for change, to foster greater innovation and the regulatory change needed to support it,” he says. “Technology and automation have always been central to the future of the air transport industry, and they will continue to play a vital role as it begins to restart and plan for recovery.”

He has a point, even far beyond the shores of Scandinavia. In Abu Dhabi, for example, automated kiosks can now measure your vital signs for infection. In July JetBlue announced an ultraviolet cleaning robot was being piloted on aircraft based in New York and Florida, perhaps supplanting the Haruko Niitsus of the world for good.

Of course, printed luggage racks and robot cleaners are great – but it would be wrong to imply that technology can solve the conundrum of pandemic travel all by itself. For his part, Nielsen says that Avinor is complementing new gadgets with clear instructions, describing how, even after installing new signs, only 10% of passengers used the new touchless options.

Rostworowski comes at the problem from a different angle, noting that, from pre-travel health declarations to socially distanced seating areas and enhanced sanitation regimes, airports can do plenty to keep people safe beyond splashing out on glitzy equipment. That’s especially true, he adds, if they receive enough funding from city halls and central governments.

What, then, of airports five or ten years from now? Will they all have gone the way of Norway, and replaced human interaction with the power of the machine? Rostworowski suggests they might, if only as a sop to passengers conditioned to ever leave the house again: “More than ever, governments, airports, airlines and suppliers will need to work together to ensure we continue to accelerate in change – and continue to meet evolving passenger needs while restoring public confidence in aviation.”

Read that sentence over and it risks sounding obvious – even boilerplate. Yet, in his talk of “evolving passenger needs” and “restoring passenger confidence”, Rostworowski perhaps says more than he realises. Certainly, there are huge amounts for airport officials to get on with, particularly if you look at how fast technology is advancing. From machines that automatically link you to a doctor, to cameras that match boarding passes to selfies from a passenger’s phone, there are countless ways to keep human interaction to a minimum. This makes sense. Apart from reducing the risk of infection, all this has the potential to speed up the dreary rigmarole of airport life – and get passengers to duty free faster, a godsend for hard-up airports everywhere.

Decline in retail revenue at Heathrow Airport in the six months prior to July 2020. 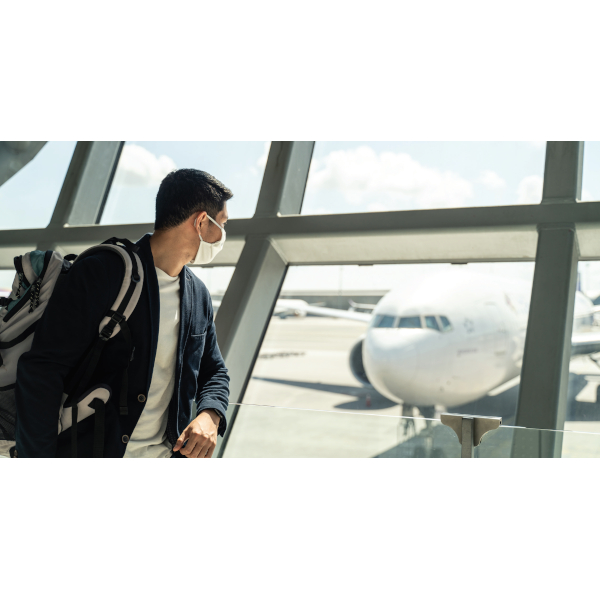 The airport experience has fundamentally changed, with busy hubs now quiet and sterile.
Post to: