The Challenge of reduction

With global temperature and CO2 emissions on the rise, what can airports do to tackle these threats? A voluntary programme designed by ACI Europe offers airports a tool for responding to these challenges and making positive changes with the ultimate goal of becoming carbon neutral. Marina Bylinsky, the association’s head of environmental strategy and intermodality, sheds light on Airport Carbon Accreditation.

Almost three years after the adoption of the landmark Paris Agreement to limit global temperature increase to below 2°C, are societies on track to reach the set goals?

In a recent report, UNEP concluded that policy action taken so far falls short of the Paris Agreement’s ambition. It estimates that, by 2030, annual global emissions will exceed the acceptable amount of CO2 by 11–13.5Gt. Additional action is urgently needed, and the various industrial sectors have important roles to play in helping to close the emissions gap.

The carbon management Airport Carbon Accreditation (ACA) programme, is one such example of voluntary action taken by an industry to help mitigate climate change.

When you consider the scale of the challenge of climate change, it is not something that airports can deal with in isolation. First, they have to respond to a growing demand for air traffic services and, in spite of the increasing efficiency of aircraft operations, this still means that absolute emissions from aviation are increasing. However, airport operators are not responsible for emissions from aircraft and, thus, only have a limited influence over them.

Airport operators’ direct emissions are estimated to account for up to 5% of global aviation emissions. At the same time, airports are a crucial facilitator of air transport, so they have a responsibility to act on as many of their site emission sources as possible. Furthermore, as the face of aviation on the ground, they are often the stakeholders who are the most exposed to public criticism regarding aviation’s environmental impact. And finally, for airport operators, climate change is not an abstract threat. Many of them are already being affected by increasingly frequent extreme weather events, so climate resilience has become a key issue as well.

This trend is likely to continue. For instance, the European Commission Joint Research Centre estimates that, by 2030, 124 European airports will be at risk of inundations due to sea level rise, with this figure increasing to 196 by 2080. For airports, reducing their impact on climate is as much a matter of social responsibility as it is one of business continuity.

Nearly a decade ago, ACI Europe – the trade association representing European airport operators – set out to empower airports to respond to these challenges in a way that would be ambitious enough for the pioneers, without excluding others perhaps less advanced in their environmental strategy. Like many big ideas, it started with a promise; a resolution by ACI Europe, issued in 2008, in which they committed to reducing their carbon emissions with the ultimate goal of becoming carbon neutral. This became the purpose of ACA.

While the resolution didn’t put a deadline on emissions reductions, it did stipulate that ACI Europe would have to establish a dedicated technical framework for emissions reductions within a year – which became the ACA programme, launched in June 2009.

To explain briefly, ACA essentially lays out the steps that anyone would take to meaningfully reduce and eliminate their carbon footprint. It assesses and recognises the efforts of airports according to four ascending levels of certification: ‘Mapping’ (mapping your carbon emissions); ‘Reduction’ (have there been any reductions?); ‘Optimisation’ (is the airport engaging others to reduce their CO2?); and ‘Neutrality’. Throughout these levels, airports have to comply with increasing obligations, in particular by including emissions from third-party stakeholders operating at the airport in their carbon management – notably airlines, ground handlers or retailers. The ultimate certification level – carbon neutrality – requires that the airport offsets those remaining CO2 emissions under its direct control that cannot be further reduced.

Over the past nine years, ACA has achieved amazing growth. While in its first year (June 2009 to May 2010), only 17 European airports were accredited. Since then, the programme has gradually expanded to all world regions, with 237 airports certified as of April 2018. Last year, these airports welcomed 42% of the world’s air passenger traffic; 133 of them are located in Europe and account for 65% of European passenger traffic; 39 airports worldwide are certified as carbon neutral, with 30 of them being in Europe.

The European region has been particularly proactive when it comes to pursuing carbon neutrality. On the occasion of the COP21, ACI Europe announced the target of achieving 50 carbon neutral airports in Europe by 2030. After this announcement, 26 individual European airports committed to become carbon neutral by that date, suggesting that the initial target would be reached. Given this enthusiasm, in June 2017, the European airport industry then decided to double the target to 100 airports by 2030. In fact, every region outside of Europe now has at least one carbon neutral airport, which demonstrates the strong drive towards ambitious climate change action at airports around the world, facilitated by ACA.

The success of the programme relies on three key pillars: a robust and performance-oriented technical framework, flexibility and independence. ACA has a sound technical foundation, which applies to various industry sectors, including the Greenhouse Gas Protocol, which was developed by the World Resources Institute and the World Business Council for Sustainable Development, and ISO 14064.

These cross-sectoral standards have then been adapted to the specificities of airports, which facilitates their understanding and uptake by the industry. Actual performance is at the core of the programme, with quantified emissions reductions being required as of Level 2 of the accreditation. In addition, airports must provide evidence that these reductions result from concrete actions and are not occurring by coincidence. Even though there is no reduction obligation regarding emissions by third parties as of Level 3, the airport operator is nevertheless required to demonstrate that it effectively engages with them and supports them in their carbon management.

Airports are free to choose their own reduction targets and demonstrate progress against them. This allows different levels of ambition and reflects the different approaches to carbon management that airports may have. This flexibility is a strength of the programme, because it engages airports of all sizes and territories in the carbon management journey, enabling them to start at different levels and to progress at their own pace. In the end, the result of this collective action may be more powerful than if the programme addressed only the most progressive airport operators.

Last but not least, while ACA has been designed specifically for airports by airports, the day-to-day administration of the programme, including the award of certifications, is performed by an independent third party: the leading environmental consultancy WSP, which has been supporting the programme since its inception. Furthermore, each airport application must be independently verified on a regular basis, before it is submitted to the administrator; all applications are thus subject to a double quality control. Finally, the programme is supervised by an independent advisory board, comprised of representatives of highly authoritative institutions in the area of aviation and environment, such as the United Nations Framework Convention on Climate Change (UNFCCC), the International Civil Aviation Organization, the European Civil Aviation Conference, and the European Commission.

How do airports do it?

Geographical circumstances and climate vary from one airport to another, so the actions taken by airports to achieve accreditation are very diverse. They include efficiency improvements to lighting and heating systems in terminal buildings; the procurement or direct generation of electricity from renewable sources; and the use of lowcarbon fuel for ground vehicles and support equipment.

To support emissions reductions by third parties, airports put in place solutions such as electric charging infrastructure for passenger vehicles, fixed electrical ground power supply (400Hz) and preconditioned air for aircraft on stand. They also cooperate, as much as possible, with air navigation service providers and airlines to encourage more efficient aircraft approach and departure procedures.

In that respect, infrastructure development projects to meet increased air transport demand can also, paradoxically, be an opportunity to reduce emissions through the implementation of the latest eco-design principles. For instance, Oslo Airport, accredited at Level 3+, opened a new terminal in 2017, which was the first airport building worldwide to receive the ‘Excellent’ certification with the Building Research Establishment Environmental Assessment Method.

Galapagos Ecological Airport, the first airport in Latin America to reach the highest accreditation level, built its new facilities with 80% of the materials being recycled from the old terminal, and also has the Leadership in Energy and Environmental Design ‘Gold’ certification.

One could argue that such actions do not really require a dedicated airport accreditation programme and would have been implemented by airports anyway. Airports are, indeed, at different levels of carbon maturity when they join ACA and some have already implemented significant measures prior to becoming accredited. However, there are also many airports that become inspired by those that are in the programme to address their own emissions.

Another significant aspect is that the programme entry is just the start of an airport’s engagement in ACA, not its culmination. The reason for this is that each accreditation needs to be regularly renewed, usually on an annual basis. In particular, for airports of Level 2 accreditation and above, emissions reductions need to be demonstrated every year. This means that even the most efficient and progressive airports need to constantly look out for new opportunities to continue reducing their emissions. This is only possible if carbon management becomes an integral part of an airport’s company strategy, rather than an add-on, based on ad-hoc projects. This long-term, structural approach to carbon management is probably the main added value of ACA for airports.

A reduction in CO2

Between May 2016 and May 2017, the 189 accredited airports worldwide reduced emissions under their control by 202,184t of CO2, a reduction of 3.5% compared with emissions of the previous three years. This may appear insignificant when compared with the 13.5Gt CO2 emissions gap identified by UNEP, but this reduction equates to the quantity of CO2 emitted during the life cycles of 2.128 million iPhones, including production.

It is important for every business to contribute, a reasonable extent, to the global effort of reducing emissions. In the end, a combination of individual actions is the best way to make a meaningful difference. ACA empowers airport operators to take such action and, as such, is one piece in the mosaic of the carbon reduction measures implemented by the aviation industry, including ICAO’s basket of measures and CORSIA.

As put by Patricia Espinosa, executive secretary of the UNFCCC, “What ACA has achieved over the past [few] years is surprising and inspiring. By charting a clear path, airport operators are acting across a range of measures, from mapping their CO2 emissions, reducing them and engaging others, to becoming carbon neutral too – there is much that other industries can learn from this and even emulate.” 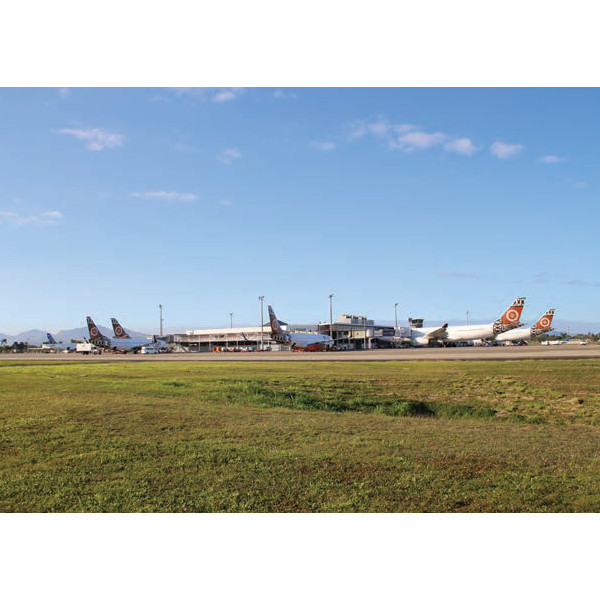 Nadi International Airport, Fiji Islands. Fiji is one of the potentially most vulnerable countries to the effects of climate change. The airport became accredited at Level 1 Mapping in 2017. 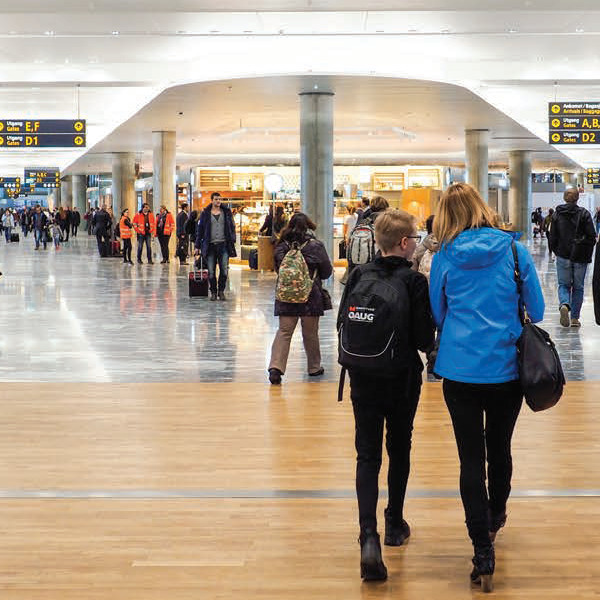