Air traffic management is a finely calibrated system that requires careful monitoring by controllers on the ground. Even so, there are numerous tasks within this field that could – and many in the sector believe should – be automated using machine-learning algorithms. Greg Noone talks to Andy Taylor, chief solutions officer for digital towers at National Air Traffic Services, and Philippe Merlo, the director for European Civil-Military Aviation at European Organisation for the Safety of Air Navigation, about why the time has come for ground control to learn something from AI.

One of the most dangerous moments for a passenger aircraft can occur immediately after it has left the runway. Only when its tail has safely cleared the asphalt can another aircraft safely start its landing procedure. It is up to the air traffic controller to assess when that moment has occurred, a decision that has to be made very quickly at major hubs where the throughput of aircraft on the runway is high. Hesitate, and the efficiency of the runway decreases; deliver the go-ahead too quickly, and the risk of a mid-air collision rises sharply.

What is perhaps most astonishing about this process is how little technology the controller has to hand in helping them make this split-second determination. In fact, many of them are literally eyeballing it. While controllers always have access to a flight radar display containing positional data for aircraft around the runway, the fact that it only updates every second means that it’s often no substitute for simply craning one’s neck towards the window to see whether the aircraft has actually left the ground.

This system has its flaws. At Heathrow, for example, traffic is so dense and the runways are so long that it isn’t always possible for ground controllers to see everything they want to see out the window clearly. Ironically, the situation is further complicated by the fact that its control tower is the tallest in Europe. “The glass cabinet the controllers sit in goes into clouds in some circumstances,” explains Andy Taylor, the chief solutions officer for digital towers at the UK’s National Air Traffic Services (NATS). In these circumstances, controllers have to rely on flight radar alone to determine when aircraft can leave the runway – which means, for safety reasons, decreasing the throughput of aircraft and delaying flights around the world.

All that may begin to change, however, with the arrival of an automated flight-monitoring system, which Taylor believes has significant implications for the way in which controllers will oversee air traffic for decades to come. The platform developed by NATS’s accelerator Searidge Technologies is called ‘AIMEE’, and combines data from ultra-high-definition cameras on the runway and other sensors to plot precisely when an aircraft has taken off and informs the tower accordingly. As well as freeing controllers from bouncing between the flight radar and their closest available window, the system is designed to function in all weather conditions.

At first glance, air traffic management (ATM) and AI hardly seem natural bedfellows. Portrayals in dramas like Pushing Tin and Breaking Bad have created an image of the air traffic controller’s life in the minds of the public as one of intense concentration on the jumble of dots and headings that constitute their flight radar displays, a life where a single yawn or distraction can see those dots collide and disaster ensue. Throwing a machine into the mix seems foolhardy, not least given the string of accidents that have accompanied attempts at conquering that other great frontier of AI, the selfdriving automobile.

This, of course, is unlikely to happen; neither the technology or the appetite exists yet for AI to assume some kind of overarching responsibility for how ATM is performed. And yet, pressures on the sector on two major fronts necessitate further automation in the space, the first being the global shortfall in qualified ground controllers of up to 10%, as airports struggle to convince young people to join a highly specialised profession with few transferable skills. The second is that the air itself is getting more crowded, with the number of flights rising and fewer places in the sky that controllers can think to put them.

This situation, combined with the obvious safety implications of an overcrowded sky, is especially concerning for NATS, which presides over some of the busiest airspaces on the planet. “Look at London: five airports, six runways, all within a close proximity, all serving the UK,” explains Taylor. “We’re always pushing the bounds of what’s operationally possible, with a real focus on efficiency underlying everything.”

In that respect, AI is an attractive panacea. Machinelearning algorithms work best when they are used to automate dull and repetitive tasks that require an abundance of concentration but a minimum of creativity from a human operator, of which there are many across ATM. “When you have that workflow benefit, it can help efficiency, but it also helps because you have that much extra thinking space,” says Taylor.

NATS is not alone in its enthusiasm for AI. Its counterpart in Brussels, the European Organisation for the Safety of Air Navigation (Eurocontrol), has also been busy exploring how and when it can fold machine-learning algorithms into its processes, starting by using AI to predict take-off times at some of the continent’s busiest hubs.

“Look at London: five airports, six runways, all within a close proximity, all serving the UK. We’re always pushing the bounds of what’s operationally possible, with a real focus on efficiency underlying everything.” Andy Taylor

“We manage one of the biggest air traffic control centres in Europe, in Maastricht,” explains Eurocontrol’s director for civil-military aviation, Philippe Merlo. It was the innovation and development team at the Maastricht Upper Area Control Centre (MUAC) who first to argued for an AI application that could mitigate the pervasive uncertainty surrounding when aircraft would take off at Amsterdam Schiphol, Frankfurt, Düsseldorf and Paris Charles de Gaulle.

The group put this to the test as part of a wider research drive into trajectory prediction improvement, creating an AI application for take-off time estimations using live flight plan data and weather forecasts.

According to Merlo, the tool predicted when aircraft would begin their ascent “with 30% greater accuracy than initially available from updates sent by the network manager”.

Merlo predicts that the tool will be rolled out by MUAC at the end of 2020. What the Eurocontrol director is more excited about, however, is the potential for AI to deliver probabilistic trajectory predictions for aircraft in European airspace. The organisation has more than enough data to hand to train such an algorithm, on everything from raw aircraft trajectories, to meteorological records and information on fluctuations in traffic arising from major international sporting events.

“If you have good trajectory prediction, you can detect the possible conflicts much earlier. It’s much easier to correct the trajectory to take flight corrections earlier in the process instead of taking emergency actions at the last minute.”
Phillippe Merlo

“If you have good trajectory prediction, you can detect the possible conflicts much earlier,” says Merlo. “It’s much easier to correct the trajectory to take flight corrections earlier in the process instead of taking emergency actions at the last minute.”

Eurocontrol’s approach on AI research has largely been informed by the ‘Fly AI’ report, published in May 2019. The product of high-level consultations across European aviation between numerous public and private stakeholders, this document provides the clearest articulation for the sector on how machinelearning algorithms can shoulder the burden of ATM. Not only does the report argue that the use of AI-powered probabilistic trajectory prediction could reduce the so-called ‘capacity crunch’ that has burdened Europe’s airspace for the better part of a decade, but that machine learning could also pave the way for ‘higher levels of complexity’ in ATC as drones and higher-altitude aircraft enter the market.

For machine-learning algorithms to become a normal feature of safety-critical applications, however, a validation process is required. This is easier said than done, concedes Merlo. While machine-learning algorithms can be adept at accomplishing given tasks, it isn’t always clear how they’ve done so – a conundrum often referred to as the ‘black box’ problem. This, in turn, makes it incredibly difficult to establish accountability if a mistake is made after the program has been trained; something that must be achieved if AI is ever to be entrusted with safety-critical applications in the high-stakes world of ATM.

One way of building trust in a given application might be to test its reliability through fast-time simulation using so-called ‘Monte Carlo’ methods. In this scenario, the programme approaches solving a given problem, about which it has only incomplete information, using repeated random sampling. “You run thousands and thousands of different scenarios and you show that, from a statistical point of view, you always remain within the safety limit,” Merlo explains.

When one considers that Monte Carlo’s methods were the basis by which researchers at Google succeeded in building a programme capable of mastering ‘Go’, a board game with millions of possible moves, it isn’t hard to imagine that AI programs will soon be capable of not only predicting traffic patterns across airspace but also determining what they should look like.

Ultimately, however, that all depends on convincing the controllers themselves that these tools are safe. “Maybe we have to implement new safety nets, new backups, in order to convince the air traffic controllers and the pilots, and all the operators involved in safetycritical processes, which they can rely on aviation intelligence based on algorithms,” says Merlo.

For his part, Taylor has made it a rule to closely consult with controllers on all possible innovations at NATS, arranging visits for them to Searidge’s innovations lab, directly underneath their vantage point at the top of the tower, to see what new solutions are being tested and how data is processed in real time by AI applications. In time, NATS’s chief solutions officer hopes that the result of this is a user-centred design process allowing for the seamless integration of machine learning into the daily operations of the control tower. “We could basically be in a position where our control towers, our approach radar units and our area control sensors are capable of far more than they are today,” says Taylor. “The use cases in that operation are unlimited.” 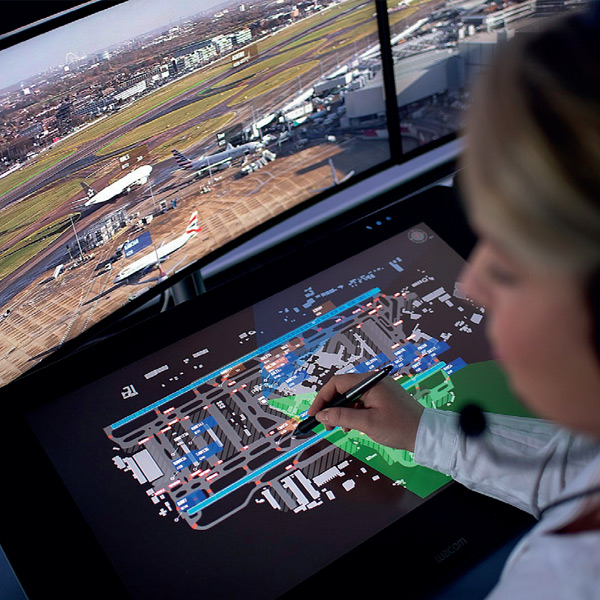 The AIMEE platform, developed by NATS, plots when an aircraft has taken off using ultra-high-definition cameras and sensors and informs the control tower accordingly. 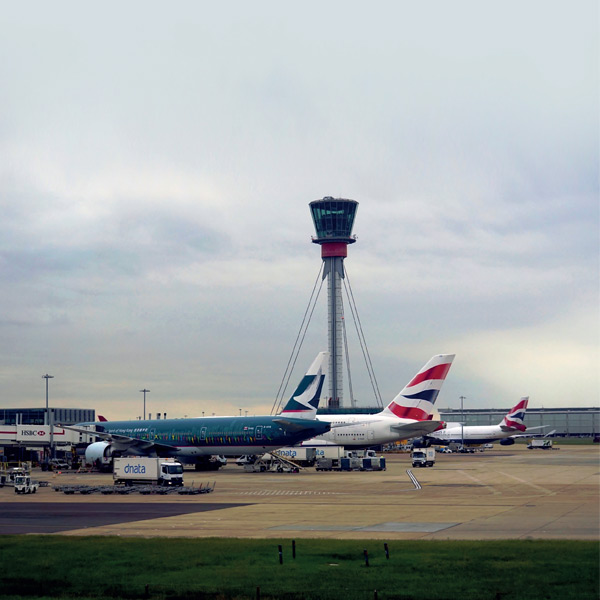 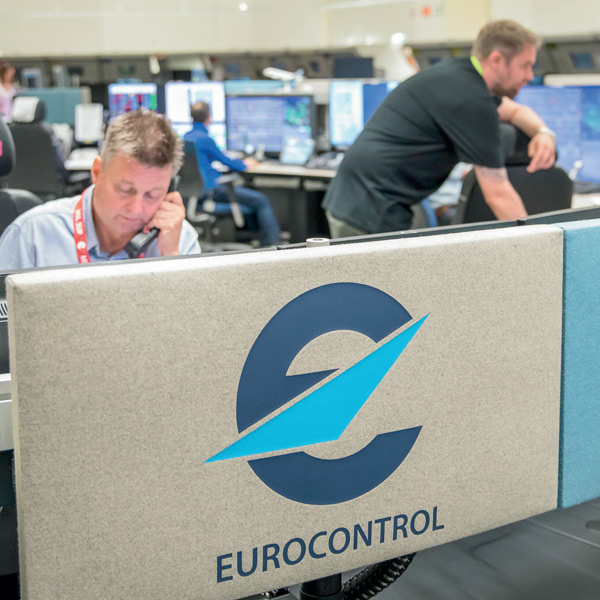