Airports are developing from transitional spaces to destinations in their own right, with breathtaking design marking some as must-see locations. Emily Moore hears from Jens Hassler of Munich Airport and Ivan Tan of Singapore’s Changi Airport on how they can be designed to supplant functionality with excitement and entertainment.

Wow, I can’t believe this airport has a butterfly garden and a movie theatre – JFK’s just salmonella and despair,” quips Rachel Chu, lead character in 2018’s runaway hit Crazy Rich Asians. The film is a showcase for the beauty and luxury of Singapore, and it’s telling that the city’s airport receives such a prominent mention. Changi is not just the point of entry to Singapore – it’s one of its star attractions.

“At Changi, we strive to be more than just an airport. We have created a travel experience that makes our airport a destination in itself,” confirms Ivan Tan, group senior vice-president of corporate and marketing communications at Changi.

The already stellar attractions at Changi – voted the best in the world for the past seven years at the Skytrax World Airport Awards – have been further enhanced by the creation of the Jewel complex. Opened on 17 April 2019, Jewel houses shopping and dining integrated into an enormous indoor garden. It features the world’s tallest indoor waterfall, the Rain Vortex, as well as mazes, canopy walks, and interactive features and games.

Changi isn’t the only airport with facilities that go far beyond those required of a transportation hub. At Munich Airport, an on-site brewery provides sustainably produced beer unique to the airport; while a leafy beer garden hosts live music and seats up to 600. In the winter, visitors can find a Christmas market and ice rink, and each autumn, surfing competitions and lessons are held on a 10×20m stationary wave. Munich was named in the top 10 airports worldwide by Skytrax in 2019, and has been designated as the best in Europe for 12 of the past 14 years.

The development of offerings like this are opening the way to a new iteration of the airport – one that’s not just a point of transit, but a place to visit and experience in its own right, created not only for travellers but people with no intention of boarding an aircraft.

“Our Christmas market invites people from the city of Munich, from the cities around us, and they come by the thousands during December,” says Jens Hassler, vice-president of business development and marketing in consumer activities at Munich.

The ticketed attractions at Jewel at Changi, such as the mazes and canopy walk, offer discounted prices for Singapore residents. In the US, non-flying visitors are permitted to enter secured areas at Pittsburgh International to make use of the shopping and dining on offer.

A space to relax

While airports like Changi and Munich boast highprofile attractions that serve as talking points, it’s clear that there are many factors that go into making an airport a destination in its own right. For Hassler, good architecture is a hugely important factor. “We had the opportunity to build a brand-new airport, following the idea that an airport is not simply a place for travelling but a place for well-being,” he says. “Our terminal facilities are airy, clearly structured and flooded by daylight.”

Munich Airport moved to a new site in 1992, and a second terminal opened in 2003. The two are connected by the Munich Airport Centre (MAC), which includes the MAC Forum, home to installations such as the Surf and Style stationary wave. “The MAC Forum was created as a place to meet, create events and atmosphere, and invite the region to come to us, to our location and to be part of this huge airport family,” Hassler explains.

Changi is a showcase for innovative architecture. Terminal 3, completed in 2007 and designed by architects Skidmore, Owings & Merrill, features a roof that modulates daylight and reflects artificial light after dark. The torus-inspired Jewel building was developed by a group led by famed architect Moshe Safdie and was bestowed with the 2016 International Architecture Award by the Chicago Athenaeum.

A strong sense of place is also woven into the airports’ offerings, marking them as specific and unique to a locale. Jewel’s lush greenery echoes the parks and botanic gardens that fill Singapore, and its restaurants and cafés include distinctly Singaporean choices.

At Munich, visitors are reminded of local heritage at every turn. “They realise they are in Munich, with the duty free that’s really focusing on our local brands and the brewery we have, with the beer garden in the airport,” Hassler says. “We are really trying to put a stamp on our airport; we are Bavarian and we show that we are Bavarian,” he continues.

“We had the opportunity to build a brandnew airport, following the idea that an airport is not simply a place for travelling but a place for well-being.”
Jens Hassler

What’s important, though, is that amenities such as food and beverage are not simply poor imitations of what can be found outside the airport, but high quality and even exclusive. The Yun Nans restaurant in Jewel, for example, is the first opening for the chain outside China.

Brewed on-site, Munich’s Airbräu is unique, while the restaurants are intended to be excellent by any standard, not just ‘for an airport’. “They have been designed by designers, and you could also find them in downtown – these are restaurants where people would go to at night and spend an evening,” Hassler says.

Cultural offerings also make an airport worthy of being considered a destination in its own right. At Schiphol, an offshoot of Amsterdam’s Rijksmuseum showcases treasures of Dutch art. Munich’s Forum hosts events that make the airport a regular on the city’s cultural calendar; in 2019, it hosted the Southern German Skateboarding Championships.

Events like this allow airports to offer what is fast becoming a key phrase in travel trend round-ups: unique experiences. This is an area in which Jewel excels. Visitors can find the 250m-long Sky Net, a suspended net for children and adults to bounce on above the trees; the Discovery Slides, a giant art installation-cum-mirrored playground; and the Foggy Bowls, where children can play among clouds of mist. Ready-made for anecdotes and Instagram, these are experiences that would be hard to replicate anywhere. “With Jewel Changi Airport, we have a game-changer,” Tan says.

“We believe that an airport with a unique appeal can also have an impact on travellers’ choice of where to stop over.”
Ivan Tan

A destination airport is more than a talking point, it also makes financial sense. Encouraging travellers to arrive earlier and spend longer at the airport, or attracting non-flyers, is a great way to boost nonaeronautical revenue. “It’s obvious that making money through non-aviation revenues like shopping, dutyfree, food and beverage, advertising or parking is an essential part,” Hassler says. It’s a crucial consideration as this income becomes integral to airport operations.

Furthermore, the more pleasant the surroundings in which visitors find themselves, the more likely they are to part with money. “Non-aviation revenues account for almost half of Munich Airports total earnings,” Hassler points out. Visitors will spend money in order to enjoy the experience of drinking at Munich’s in-airport brewery and beer garden, for instance.

While it’s clear that visitors will now come from the local area to enjoy an airport’s facilities, there’s another question – will travellers organise their plans around stopping at a particular destination airport?

Hassler is hesitant. “I truly believe that the decision for an airport is done by price, aircraft and the routing itself,” he says. “Only in a case where you have the same price or the same routing, then you probably take a decision in favour of the airport that you like most.”

However, the characteristics of an airport may have more sway when it comes to flights with layovers. Tan certainly thinks so. “We believe that an airport with a unique appeal can also have an impact on travellers’ choice of where to stop over,” he states. This is hugely important – layover passengers make up a third of Changi’s traveller numbers.

Changi has high expectations for the role the new development will play. “We hope, with Jewel, to capture tourism mindshare for Singapore and augment Changi Airport’s attractiveness as a leading international air hub, drawing travellers from around the world,” Tan says. There’s no doubt that a shift is under way, as airports become places to enchant rather than endure. 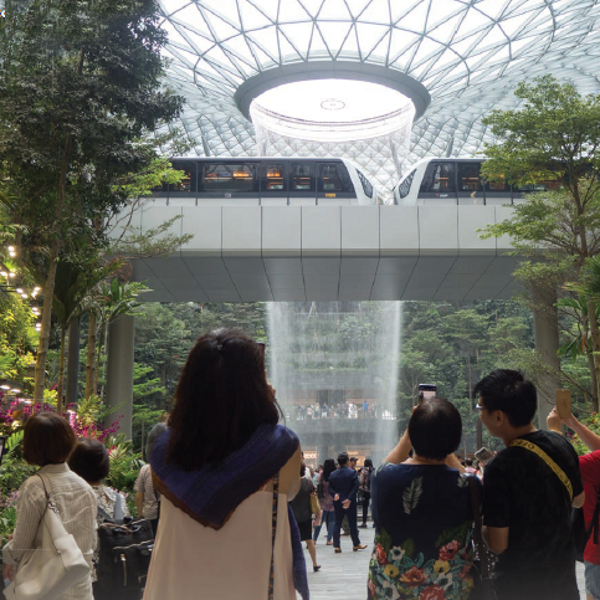 photographers snap the Rain Vortex inside the Jewel complex at Changi Airport, Singapore. 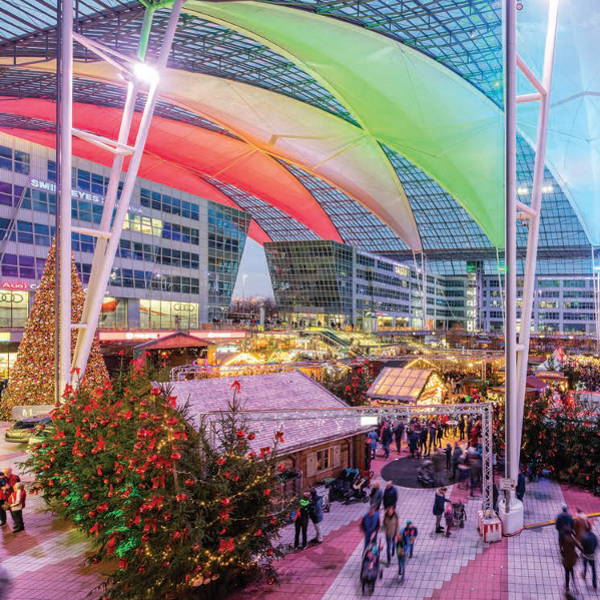 The Christmas market at Munich Airport, which attracts many non-travellers each year. 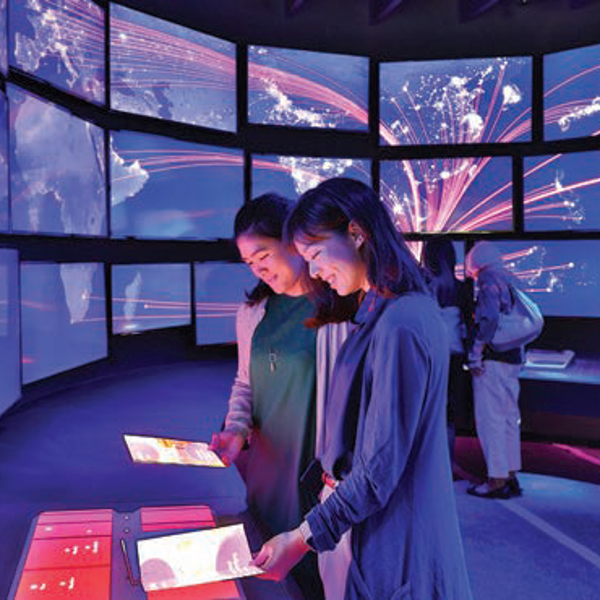