"I would happily travel the country in a Heathrow pod." When car-loving James May, stalwart of UK TV programme Top Gear, tweets a comment like that, it's clear that Heathrow's pods are something special. With this successful project showcasing the benefits of personal rapid transit (PRT), Asian airports are now looking at building pod systems of their own.

"The Heathrow pods offer a personal, comfortable and reliable ride that is emission free," says John Holland-Kaye, CEO of Heathrow. "Passenger feedback has been amazing. We love watching people's reactions when they see the pods for the first time."

The world's first commercial PRT system, Heathrow's pod service carries around 800 passengers a day across the 3.9km between Terminal 5 and its business car park. Voted by customers as their favourite airport passenger service, the system removes 70,000 bus journeys and hundreds of tons of CO2 from Heathrow's congested roads each year.

One reason for their popularity is that pods share many of the traits of the car, such as privacy and the ability to use them on demand. Like a lift, passengers choose their destination on a touch-screen panel when they arrive at the station. If a pod is waiting - at Heathrow, there is never more than a 15-second wait - the station doors immediately open in synchronisation with the pod's. When they're sitting comfortably, passengers hit a start button to get underway.

Since launching in May 2011, Terminal 5's driverless electric pods have covered around 1.5 million miles - that's three times as far as Google has so far managed with its fleet of electric cars.

"We will carry our millionth passenger in mid-2014," says Fraser Brown, managing director of Ultra Global PRT, which created the Heathrow system. "The pods look funky and sexy, but they are built using proven, off-the-shelf automotive technology, so the system has been phenomenally reliable."

PRT systems have been around since the 1970s, offering an alternative to cars and taxis for 'last-mile' connectivity to higher-capacity public transport hubs. Unlike cars and buses, their electric power minimises emissions and their dedicated guideways mean they don't get stuck in traffic; the average Heathrow journey is ten minutes quicker than the old buses.

Ultra Global's take on PRT began as an engineering research project at Bristol University in 1995. Government backing saw the company build a working product and complete an 800m test track by 2003. That was the year that Heathrow first started talking to Ultra Global about using PRT, with traffic congestion reduction cited as one of the main reasons.

"The roads around Heathrow are extremely busy, and the buses they were running around that network were contributing to that congestion," says Brown, who also notes that about 20% of the airport's emissions come from surface transport rather than aircraft. "Anything Heathrow can do to reduce its emissions is a good thing."

Emissions from Ultra Global's pods are less than half those of buses. Almost silent in operation, the pods are also 50% more energy-efficient than buses, trains or trams.

"The shuttle bus is a great way to carry fresh air," says Brown. "They are very efficient at peak times when they are full, but most of the shuttle buses for most of the day carry very few people."

Heathrow also recognised that passengers didn't enjoy queuing for a bus in a cold, wet car park. That average 15-second pod waiting time is a dramatic change from the six or seven minutes the bus system demanded. These days, 80% of passengers don't have to wait at all. One reason for this is that the pods recharge themselves while their next customers arrive, so are almost always ready to leave immediately.

Another attraction for Heathrow was PRT's ability to add capacity to the transport network, rather than reducing it as a tram or bus lane does. Because it uses a dedicated pathway, it achieves this without creating further congestion.

"They didn't have the space to increase the capacity of the road network," says Brown. "PRT is a uniquely light system in the sense of capital cost, visual impact and the space required. You can fit that on top of an existing campus environment in a way that you just can't achieve with anything else."

The 21 vehicles at Heathrow run on a simple elevated guideway, consisting of two parallel rows of concrete barriers and a lightweight road surface. Vehicles navigate themselves based on an internal map, bouncing four lasers off the barriers to check their position. They constantly report their position to the central control system via a wireless link.

"Peas in a pod: PRT met Heathrow’s need for a fast, short-wait, emission-free, congestion-easing travel link between Terminal 5 and its car park."

The lack of points or heavy-duty track means a small footprint. Combined with simple technology, that gives PRT dramatically lower costs than railways and trams. The Heathrow project totalled £30 million, with Ultra quoting £3-5 million per kilometre to deploy a complete network, including vehicles, infrastructure and control systems.

All those benefits have drawn the attention of Asian airports. With partner China Engineering Consultants and consultants Sinclair Knight-Merz, Ultra Global is carrying out a feasibility study into the deployment of PRT in Taiwan. Lasting until August 2014, the study will increase awareness and understanding of PRT in the country, and will explore planning and design issues for its implementation in New Taipei City. A specific goal is find out how PRT might be used to connect the different upcoming developments at Taiwan Taoyuan International Airport.

The planned third terminal is expected to handle 43 million passengers annually when the $1.9-billion project is complete. This is part of the even larger Taoyuan Aerotropolis scheme that includes expansion of the existing termini, an industrial park, and new zones for cargo, passenger and logistic services. Allied to that is the Airport City development, another multibillion-dollar project that will see land around the airport developed into an 'industry corridor', with facilities that will create 10,000 new jobs. Currently under construction, the Taiwan Taoyuan International Airport Access MRT System will link central Taipei to Taoyuan Airport, as well as Sanchong, Xinzhuang, Taishan and Linkou.

"Given that they are in the process of putting in a rail link between the airport and the city, they are looking at how that could work together with PRT," says Brown. "That would provide connectivity around the Airport City campus to the new hotels, offices and conference centres that will be built there, and to the three terminals."

According to Brown, Ultra Global is also talking to other Asian airports.

"Changi has brought multiple representatives across to view Heathrow and to see PRT," he says. "They are looking at a third runway and a fifth terminal, but it's still in the early stages."

A city project for Amritsar, India, is the most ambitious PRT deployment yet seen and its first urban application. Up to 500,000 people visit Amritsar's Golden Temple, the holiest Sikh shrine, on important religious festival days. The first phase of the planned PRT system envisages a fleet of 210 six-seater cars on guideways 20ft above the ground, able to transport more than 100,000 people daily between seven stations.

By taking 35% of visitors, the pod system would ease congestion and slash 30 minutes from the current journey times.

"It's providing last-mile connectivity between a railway, a bus station and the main Sikh temple in the city," says Brown. "The temple is 3-4km away from the stations, and it's a tough, hot, dusty journey to get there. It will provide additional transfer capacity into the city at relatively low cost, and with low impact on a historic and culturally sensitive site."

Although the contract was awarded to Ultra Global and its partner Fairwood in December 2011, the project appears to have become mired in India's tortuous political process. After extensive delays, the Punjub regional government that laid the project's foundation stone in 2011 decided to change to a competitive bid process in 2013 and recently proposed a bus-based system. At the time of writing, the project is still waiting for the go-ahead.

Ultra Global's first customer has also deferred plans for a new system. All the signs were that Heathrow would build a second pod network to connect Terminals 2 and 3 with their car parks, but this project failed to make it into the airport's five-year strategic plan, which was published in January 2014.

"Unfortunately, it did not end up in the final business plan that the airport agreed with the CAA," says Brown. "The airport certainly did see the value in it, but the amount of capital it can deploy is limited, and other projects had greater priority. We will work with the airport to see if we can make a private business case to invest in the capital outside of the airport's regulated asset base."

Beyond these setbacks, interest in Ultra Global's pods remains high. For example, the company was recently listed as one of the options in a £72-million scheme to link Paisley with Glasgow Airport. It has just finished a paid-for feasibility study in the Brazilian city of Florianópolis and is looking at potential airport deployments in that country. Elsewhere in Asia, Ultra Global is in discussions with partners in Malaysia, Thailand, Australia and Saudi Arabia.

As pressure to reduce airport campus congestion and CO2 emissions grows, PRT's benefits look ever more compelling: low cost, minimal emissions, and the flexibility to cover multiple origins and destinations. Which Asian destination will be the first to delight its customers with a pod network? 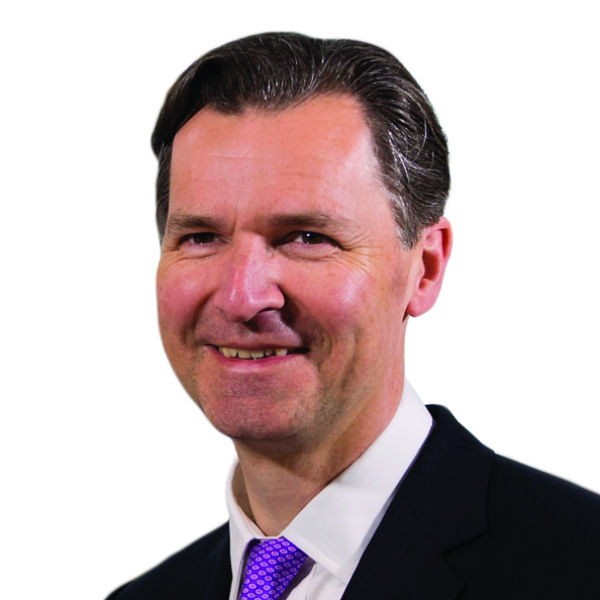 John Holland-Kaye was appointed to the role of CEO at Heathrow Airport in July, having previously served as development director since November 2012. He joined the company as commercial director in May 2009. Prior to Heathrow Airport, he was a divisional CEO with Taylor Wimpey, and has also worked at Bass Brewers and LEK Consulting. 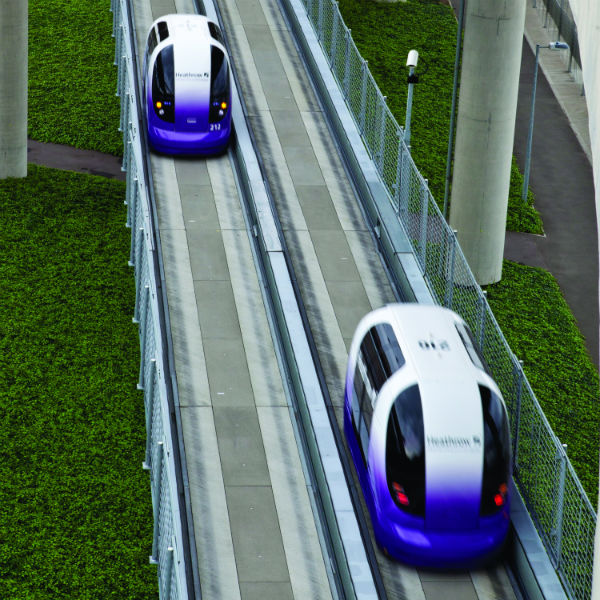 PRT met Heathrow’s need for a fast, short-wait, emission-free, congestion-easing travel link between Terminal 5 and its car park.
Post to: