It’s long been clear that the only way to maintain safe travel during the pandemic is by prioritising testing and making results easily available to travel authorities. While the focus has shifted to vaccinations in recent months, the need for a secure system to manage Covid-19-related health data is as urgent as ever. Lynette Eyb looks at what role International Air Transport Association’s (IATA) digital Travel Pass and other so-called ‘vaccination passports’ may play in getting people flying again.

The lights at the end of the runway may soon be back on. Mass inoculation programmes are under way as governments scramble to secure enough Covid-19 vaccines to stymie infections and pave the way for economies to reopen.

Over a year into this devastating pandemic and the world is starting to imagine life after Covid-19 – conversations are shifting from infection rates and PPE to ‘a return to normal’. So-called ‘vaccination certificates’ are top of the agenda, but will they really get the world flying again?

The International Air Transport Association (IATA) hopes so. Its Travel Pass app will consolidate vaccination, testing and other health data to allow airlines and border authorities to gauge a passenger’s Covid-19 status. The World Economic Forum is backing a similar project, the CommonPass, while the EU and countries farther afield have flagged using their own vaccination passports en-route to normality.

Professor Paul Hunter, an expert in infectious diseases at the University of East Anglia, says the aviation sector needs to be wary of overpromising. He warns that digital passports will not be the magic bullet that stops Covid-19 at the border.

He says tough decisions are ahead for countries like Australia and New Zealand, which have operated closed-border policies. Vaccination passports may provide an indication of arrivals who are “less of a risk”, but the jury is still out on transmissibility. “[Those visitors] will be less likely to develop Covid and less likely to pass it around or put pressure on the health system, but nothing will be absolutely zero.”

Vaccines appear to reduce infection rates and disease severity, but they may not provide the holy grail of herd immunity or permanent protection, Hunter says, adding that any comparisons between Covid-19 vaccination certificates and the yellow fever system are both premature and simplistic. The yellow fever vaccine is a single formula that is used globally. It is a one-off dose that offers lifelong protection and prevents transmission.

By contrast, more than a dozen Covid-19 vaccines may be rolled out – all offering varying levels of efficacy for uncertain lengths of time. Hunter describes policing the various vaccines and their efficacies as a “minefield” that app-based technology may not be able to aggregate. “I’m not saying vaccination passports are going to be worthless, but it’s unlikely to be the thing that makes a big difference [to stopping the virus],” he says. “There are so many unknowns with transmissibility, there are so many variables between the vaccines.”

Careen says failure to reach international consensus would further delay the industry’s recovery from Covid-19 and lead to border restrictions being retained for an even longer period of time.

Harmonisation would also alleviate concerns over multiple apps and minimise any competition or confusion they caused. As a precaution, IATA is working with the UN’s International Civil Aviation Organisation (ICAO), WHO and others to develop certificates that will ensure “equivalence, mutual recognition and acceptance for travellers”, he says.

Even so, IATA hopes its product will become the app of choice for airlines. “It’s important to note that the Travel Pass is likely to be used by airlines under their own brand, so the Travel Pass that we are developing will appear to passengers as a travel pass offered by their airline and incorporated into their whole travel process,” he says. “We would be providing the architecture based on a tested system that is globally harmonised and secure.” Already more than a dozen airlines have signed on for the IATA solution.

Careen is confident of take-up despite the failure of Covid-19 ‘track and trace’ apps across multiple markets, including the UK and France, whose governments spent millions on apps that made little tangible difference to infection rates. “It is always possible that the failure of one or two apps could undermine the many, and that is why it is critical that IATA Travel Pass is a fully functional and secure app from day one.”

Data protection measures should safeguard passenger confidence. “Due to the level of data security and privacy the app has been designed with, people always remain in control of their information, which will allow them to feel more comfortable using the app,” he says.

IATA says the app is a scalable and cost-effective solution that keeps personal data on the mobile device. Instead of acquiring data, Travel Pass facilitates the exchange of encrypted keys between stakeholders – including labs, airlines and authorities – via secured protocols that allow them to verify documents and, by extension, the biosafety of the flight.

The app, which uses the Timatic-powered global registry of health requirements, allows passengers to tap into information on relevant testing and vaccine requirements for their journey. It’s been designed by the industry for the industry, says Careen, with an airline advisory group providing input. “IATA is not creating its app for profit. It will recover the costs of development only.”

He says feedback from airlines has been positive. Singapore Airlines rolled out a full pilot in March 2021. The airline says the app will consolidate health credentials, allowing a faster and more seamless check-in process. IAG airlines, Qatar Airways, Emirates and Etihad Airways are among those lined up for subsequent testing.

Chris Youlten, Etihad’s executive director, operations strategy, says the focus on Covid-19 testing during the pandemic has helped facilitate a safer return to travel – and that focus would now move to vaccination data. He agrees with Careen that global standards are necessary.

“Like PCR testing, vaccination needs to be standardised if it’s a barrier to entry for travel,” he says. “While different vaccines will be available for the foreseeable future, a standard, verifiable record of vaccination will be the best method of managing access to aviation. Airlines need the support of governments globally and international organisations such as WHO to achieve this.”

Youlten says the airline is working on the assumption that it may be necessary to aggregate data from multiple sources if global standards or a single internationally adopted app are not achieved. He says hard copy vaccination certificates and testing results would still be accepted at check-in if passengers did not have access to – or chose not to use – a digital passport.

“We believe that the risk of on-board transmissions is very low to begin with, and testing and vaccinations add another level of security.”

While the airline supports vaccination to control and limit the spread of the virus, Youlten says Etihad has no plans to make vaccinations compulsory. It will instead continue to align its requirements with those of destination countries.

He agrees with Hunter that it will take more than digital passports to end the Covid-19 nightmare and get people flying. He says vaccination certificates would need to be used in conjunction with other tools to build confidence in air travel. He cites the airline’s distribution of PCR tests, on-board “wellness ambassadors”, and its provision of passenger mask and hand sanitiser kits as the types of initiatives that will need to continue. Behind the scenes, airlines will need to maintain a focus on elevated cleaning standards.

Careen says air travel remains safe. “We believe that the risk of on-board transmissions is very low to begin with, and testing and vaccinations add another level of security,” he says.

However, he says IATA does not support compulsory vaccinations certificates for entry. “As a general principle, travellers to a country should not be subject to stricter conditions than the measures applying for residents,” he says. There were not only ethical concerns with mandating vaccinations, but “such a policy would also risk discriminating against those markets where vaccines may take longer to become widely available”.

Instead, IATA supports moves to exempt vaccinated flyers from quarantine – a move already flagged by Greece, Poland, Latvia, Lebanon, the Seychelles and others. Careen suggests apps that track vaccination and testing data could help manage exemptions and get borders open.

“IATA does not expect that there will be significant vaccination levels in most countries until the end of 2021 at the earliest,” he says. “The airline industry remains hanging by a thread and in need of continued government support to survive. Potentially another year of delay would be very damaging – not only for the industry, but for the global economy as well.”

While digital passports will not be a magic bullet, Hunter agrees they could prove useful in aiding the recovery. They could enable airlines to track immunisation and infection among passengers and flight crew, thereby safeguarding schedules and the health of staff. Vaccination passports, therefore, may become more of an economic or business model than a national healthcare focus.

For digital passports to have any lasting impact, however, airlines and airports will need to continue to play an active role in not just monitoring vaccination and testing data, but in also facilitating it.

During the trial phase of the IATA Travel Pass, Singapore Airlines passengers were able to use the app to book Covid-19 tests at one of seven local labs, the results of which were then fed back into the app. It’s envisaged vaccination data will be added in a similar way. More than 100 European airports, meanwhile, now offer Covid-19 testing.

Medical laboratories at airports would have been unthinkable 18 months ago, but so too were hand sanitisers, universal face masks and gate after gate of inactivity. The aviation sector is having to be innovative to weather this storm. Airlines and airports are using every item in their digital toolboxes on the long haul not just to recovery, but to ensure their very survival. 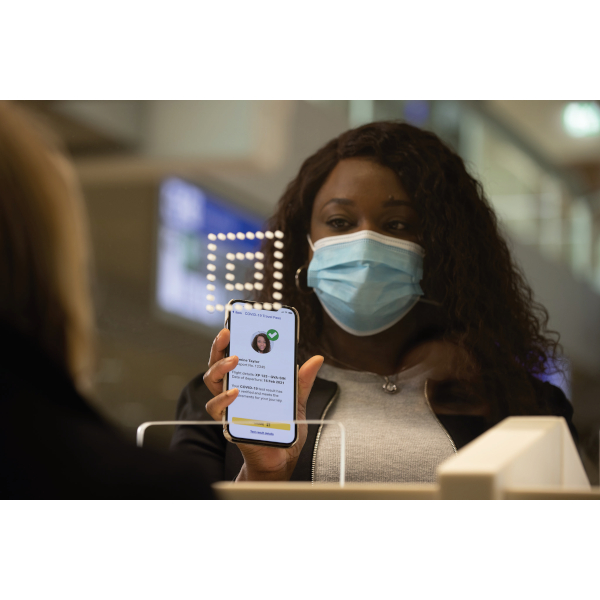 IATA’s Travel Pass app will consolidate vaccination, testing and other health data to enable airlines to gauge a passenger’s Covid-19 status.
Post to: