Helsinki Airport is the leading northern European transit airport for long-haul traffic. Earlier this year, Finnair enlisted a group of frequent flyers in a facial recognition trial that could provide a glimpse into the everyday future of air travel. Stephen Hall speaks with Heikki Koski, vice-president and director of passenger management at Helsinki Airport, about ‘hands in the pockets’ travelling.

In the world of low-cost flights and fare aggregators, flying has never been more accessible. Inside the airport, however, passengers are still frustrated by extensive queues and long wait times at multiple passport and boarding-pass checks throughout the journey.

Imagine a scenario where you leave the house to take a trip, you briskly walk through the bag drop queue where your face is scanned. In one hand, you hold a cup of coffee and in the other, your suitcase; there’s no need for any identification. Following bag checks, you then walk through the airport to board the plane without lifting a finger. Your face is the only passport needed for travel. During an experiment in Finland, officials conducted a trial that moved the city’s primary airport a step closer to making this picture a reality.

Earlier this year, a group of frequent flyers gathered to take part in a test at the most-visited airport in Finland. Each individual had submitted three selfies. The trial involved 1,000 selected individuals, taking place over a one-month period.

The participants used an Android smartphone app that sent their photographs to a test software platform. They were then sent to a designated check-in desk that contained cutting-edge facial recognition technology. Heikki Koski, vice-president and director of passenger management at Finavia, the Finnish civil aviation administration that is owned fully by the Finnish state, was one of the officials involved in the trial and his overall impression of the test was very positive.

“The technology proved robust, although there were also several observations of improvements that must be made for the next phase of piloting, as well as future commercial use,” Koski observed. “But even more importantly, the test set-up was found to be convenient for the participating passengers and employees.”

It’s the quest for greater convenience, in an era when people are becoming increasingly used to things being instantaneous, that has prompted airports to turn to innovative advances such as biometrics to satisfy passenger demand for greater speed and ease.

About 90% of Finland’s airport traffic passes through the capital’s airport. Thanks to a recent extension, the airport will be ready to serve 20 million people a year in 2020. Greater efficiency for this growing flock of passengers is essential and is the ultimate objective for officials.

For Koski, his vision for the concept is ‘hands in the pockets’ travelling. The aim is to reduce the number of moving parts in the machine for the passenger, enabling a much smoother and less stressful experience.

“A passenger would pass through different process points with minimal waiting and, thanks to ‘zero UI’ philosophy, with minimal need to bring up any documents or otherwise change the natural behaviour,” he explains. “One of the key components of the pilot was to check if we could achieve the required recognition performance and certainty for passengers who are walking, that is, on the move, and the pilot certainly showed a lot of promise.”

This promise goes beyond passenger convenience; facial recognition technology offers great possibilities in terms of increasing security and vigilance at a critical time for the aviation industry. Facial analysis at bag drop, for example, ensures there’s a visual record of the passenger that can be stored by the airline.

“Let’s just say that there’s a lot of potential, especially if and when it’s required as standard from passengers,” Koski says. “It is easy to see that many current processes could be made much more secure by the use of biometrics, but legislation is probably the biggest influencer to how big the impact will be.”

The technology is also being tested in Amsterdam, where officials are experimenting with face analysis that can measure age, gender, mood and several other facial features in real time, offering unique insight into people’s subconscious emotions and interests.

The end point would be the passenger just walking from one place to another without even noticing the identity and travel permit checks.

The human face has the biggest range of muscle structure in the body, and 43 of these muscles are directly linked to displaying emotions. Humans are capable of making thousands of unique expressions. The face is a person’s primary identifier, with each individual able to remember up to 10,000 faces. For instance, In experiments, people were able to identify 90% of their classmates, 35 years after leaving school.

In 1964, the first computer software was created that attempted to mimic what the human brain can instinctively do. Woodrow Bledsoe, one of the pioneers of artificial intelligence, was the man behind the test, which required an administrator to locate features such as the eyes, ears, nose, and mouth on a photograph. The results were shrouded in mystery, with the funding provided by an unnamed intelligence agency, and consequently little of the work was published.

Over half a century later, as this technology becomes more effective, reliable and enters the mainstream, Koski admits that there still needs to be a step up in technological proficiency to implement it worldwide.

“On a high level, the front-line biometrics system – the choice of the preferred identification method – is needed, and that covers the hardware and software topics,” he says. “It is probably wise to build a layer-based system, on top of APIs that enable several different kinds of hardware providers and potential identification methods. At the back end, there needs to be a system where the biometric information and potential other customer information is stored. But for integrations, plenty of other systems are also required.”

As well as the technical barriers standing in the way of widespread adoption, there are complications to overcome. “Obviously, legislation and standards need to be in place to enforce security in critical issues, and authorities need to enable development, and supervise technology and service providers when needed,” Koski says. “But I guess this is quite general to all applications where personal and sensitive information is handled.”

Despite these obstacles, the world is not far from a biometric airport. In an ongoing trial at Brisbane Airport in Australia, passengers hand over their passport, boarding pass and an image of themselves before the flight, and then use those details for the rest of the journey. British Airways recently introduced an automated facial recognition system for domestic travel and Charles de Gaulle Airport in Paris is testing a new system to compare a traveller’s face with their passport photo.

Faces in the crowd

Last year, 3.8 billion passengers passed through airports; that number is only set to rise as flying becomes more accessible, and populations increase exponentially. Facial recognition and biometrics offer a solution to overcapacitated hubs without having to unremittingly extend terminals. However, it’s a complex process to phase in the technology locally, and a lot more complicated globally.

The greatest benefits of a single token could be achieved in global use, but that does not necessarily mean that every airport in the world needs to use the same systems at the same time.

“Obviously, the greatest benefits of a single token could be achieved in global use, but that does not necessarily mean that every airport in the world needs to use the same systems at the same time – there could also be smaller subnetworks of closely connected airports taking advantage of the single token approach.” Koski explains.

As this technology shifts from novel to all-pervasive, the question remains as to how the single token concept can be incorporated into existing airport infrastructure, but Koski has high hopes for smooth integration.

“Biometrics are a natural extension to current self-service initiatives and touchpoints, and this can be noticed by looking at the vendors’ offerings,” he says. “But it is very important that the vendors understand that there must be a possibility to build a layered, multivendor solution – especially in the future, when clear standards are introduced.”

Over time, biometrics have the potential to bring the cost of travel down by optimising the processing capacity of airports. This will consequently have on impact on the cost of producing services, but this requires that the technology is widely adopted by the airport’s passengers and throughout the travel chain.

For Koski, the future of facial recognition holds great promise and he envisions a very different airport experience a few years from now. “The end point would be the passenger just walking from one place to another without even noticing the identity and travel permit checks,” he says. “And of course, this means that the queues would be almost gone, unless caused by other factors than identification. It is just a question of time.” 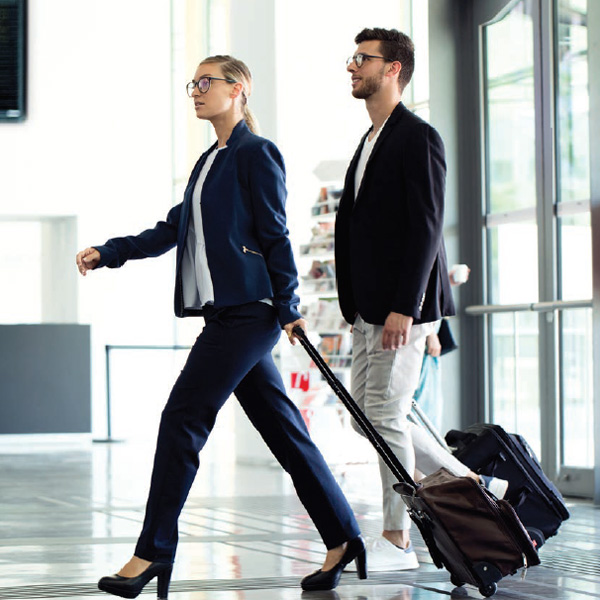