Organising the dozens of aircraft coming in to land is hard work at any single-runway airport. At Gatwick, however, air traffic controllers are adapting by working with partners further afield to slow down incoming aircraft and keep the system moving. Andrea Valentino talks to Adrian Clark, an advanced concepts manager in airspace and future operations at NATS, about how Gatwick’s new XMAN system is boosting the efficiency of its single-runway operation.

Before Gatwick really existed, there was the Beehive. Opened in 1936, it was the first integrated terminal in the world, directly linking passengers to their aircraft, and the building to local railway connections. Its sleek art deco curves and whitewashed walls spoke to the future, albeit one with limited horizons, consisting of regular flights to Jersey and landing strips of closely trimmed grass.

Though it still survives as a listed building, housing a small solicitor’s office, the Beehive now feels as touchingly naive as the world it was built for. Gatwick Airport is now the second-busiest airport in the UK and the ninth-busiest in Europe, hosting over 40 million passengers each year. This manic schedule is reflected by particular destinations. In 2018 alone, Gatwick processed over 1.5 million travellers flying in and out of Barcelona, with Malaga and Dublin following close behind.

Yet in certain ways, Gatwick never did graduate past the genteel image of the Beehive and its creators. The hub remains the second-largest single-runway airport on earth, and while Gatwick’s administrators have got that fact and all the micromanaging it implies down to an art form – on a good day shepherding as many as 55 jets an hour on or off the tarmac – any problems can still cause gridlock fast.

Not that the situation is hopeless. By working with colleagues in neighbouring countries, Gatwick’s air traffic controllers have devised an ingenious way of keeping their single link with the outside world running smoothly, saving time for passengers, money for operators and the environment for everyone. Put another way, Gatwick might finally be putting the legacy of the Beehive and all it represents to sleep – with colossal implications for airports everywhere.

July 2019 was not a good month for Gatwick Airport. On 10 July, a problem in the control tower closed the runway for two hours, cancelling dozens of flights and diverting many more. A little over a week later, on 20 July, firefighters were scrambled to a British Airways aircraft with a technical fault, closing the runway again and bringing operations to a temporary standstill. Just one of the inevitable pitfalls of being a uni-runway airport, you might think, until you realise that things can get muddled even when things are running smoothly.

“Traditionally, air traffic controllers have been about talking to each other,” explains Adrian Clark, an advanced concepts manager in airspace and future operations at NATS. At Gatwick, he says, two supervisors have typically picked up the telephone and talked to each other. The idea, Clark continues, is to calculate how many aircraft are likely to arrive and leave on any given day, and divvy up runway time accordingly. A 50/50 split would therefore mean departures and arrivals alternating exactly – though in practice there is often a skew one way or the other depending on the time of day.

In a perfect world, this system of ad hoc phone calls might work well – but as the chaos last July elegantly demonstrates, aircraft and their pilots hardly exist in a bubble. Imagine, for instance, that a departure is delayed for 20 minutes because a passenger decided not to fly and their bags had to be taken from the hold. That risks creating a veritable pile up, as now-delayed arrivals back up in the skies above Gatwick. That is doubly true given the tight numbers involved. At peak times, an aircraft uses the Gatwick runway every 80 seconds, meaning that even minor hiccups can quickly snowball. More to the point, having dozens of aircraft circling a few miles above the Sussex countryside does more than simply waste time. For one thing, it squanders money, as each arrival gobbles up around 30kg of expensive fuel while going basically nowhere. For another, it hurts the environment. Waiting in line creates more CO2 emissions than cruising up in the clouds, while being closer to earth also causes noise pollution.

“Traditionally, air traffic controllers have been about talking to each other.”

The latter is far from inconsequential: the figure has dropped somewhat in recent years, but Gatwick estimates that around 10,000 people still live within the ‘noise footprint’ of its roaring jet engines.

Passengers passing through Gatwick each year.

Though its single runway hardly helps, it would be wrong to suggest all this is unique to Gatwick. Airports across Europe struggle with similar problems, not least Gatwick’s neighbours in and around London. As recently as 2014, for example, flights landing at Heathrow were typically held for over eight minutes before coming in to land. And if coronavirus has temporarily dampened industry prospects, industry experts predict that global passenger numbers will soar to 8.2 billion by 2037 – risking what Clark calls “traffic jams in the sky” if a solution is not found.

If you enjoy driving, you have probably noticed those overhead gantries on the motorway warning about accidents ahead or roadworks at the next junction. And it is just as likely that, having taken note of the coming delay, you will have slowed down a little, keeping your speed up for as long as possible, if only to make yourself feel better when you finally do come to a grinding halt for the next hour.

“If we can slow them down while they are still nice and high in the cruise phase then that means less noise into an airport.”

As a former RAF air traffic controller and general aviation wizard, this decidedly earthbound analogy is not what you might have expected from Clark. Yet in its simplicity, his talk of cars and motorways really does an excellent job at explaining how NATS and Gatwick began fixing its own traffic problem, albeit ones up in the clouds. Known as XMAN, their innovative cross border arrival management system acts like a motorway gantry, warning approaching aircraft of any obstacles ahead.

CO 2 predicted to be offset by the implementation of XMAN.

Building gantries at stratospheric heights is a little challenging, of course, so NATS instead teamed up with air navigation service providers (ANSPs) across western Europe to keep arrivals informed. As they get to within 350 nautical miles from Gatwick – or about 50–55 minutes from landing – neighbouring ANSPs will tell pilots to slow down if necessary. As Clark notes, this results in minor delays for inbound passengers, but cumulatively they can have a hugely positive impact when dozens of aircraft are buzzing around.

“If they slow down when still in the cruise phase, and during the descent, they are going to use less fuel,” Clark explains. “This is going to save airlines fuel. And obviously, if they burn less fuel, they produce lower environmental emissions – and if we can slow them down while they are still nice and high in the cruise phase then that means less noise into an airport.” The statistics certainly appear to support his optimism. According to NATS, absorbing delay before they reach the airport will spare aircraft over 26,000 minutes of low-level holding each year, in turn saving operators around 1,200L of fuel and slashing CO2 emissions by 3,800t.

In a sense, these impressive figures are not so surprising, shadowed as they are by years of similar work at other hubs. NATS implemented a similar XMAN system at Heathrow in 2015, while EU rules are pushing teamwork across the continent. Passed in 2014, the Pilot Common Project regulation expects European air traffic controllers to sharpen their own arrival management systems by January 2024. Suitably inspired by Brussels, Clark is liaising with counterpoints in France and Germany – among other places – to develop the Single European Sky ATM Research (SESAR) scheme.

If the Gatwick project already had NATS work with teams in Shannon and Maastricht, SESAR envisages an overlapping chain of cooperation across western Europe, with each ANSP able to pass aircraft on to its colleagues as they cross jurisdictions. “We contributed a focus on a single runway,” says Clark, “but there are plenty of other partners in there.”

At the moment, ANSPs act like conductors for the sky, telling pilots to go as slowly as the situation dictates. But as Clark explains, modern aircraft are sophisticated enough to take the idea even further. Rather than ordering arrivals exactly when to slow down, he imagines a world where air traffic controllers simply tell them to be at a certain place at a certain time – and let in-flight computers figure out the rest.

“What that means is creating a queue in the sky where the pilots manage their own flights,” says Clark. Apart from anything else, he notes, that would reduce the human workload of individual air traffic controllers, and perhaps even create a totally fluid system whereby aircraft can seamlessly fly all the way to the terminal manoeuvring area above the airport, orchestrating themselves all the way.

This is still mostly aspirational, but Clark describes the sort of self-organising motorway as the “holy grail” of flight management, balancing as it does the efficiency advantages of keeping aircraft in cruise with the environmental benefits of lower fuel consumption. More to the point, Clark believes that implementing these “tighter management systems” will become ever more important, particularly as the environmental consequences of flying become clearer. If only those early optimists, with their Beehive and their trimmed grass runways, could come back and see what their airport finally became. 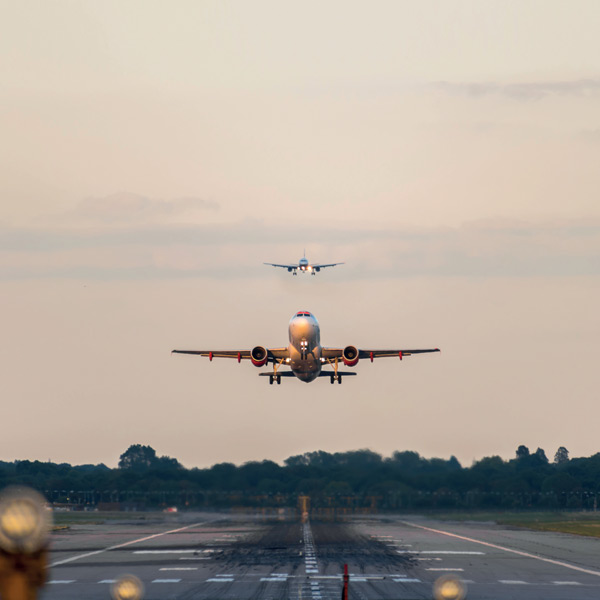 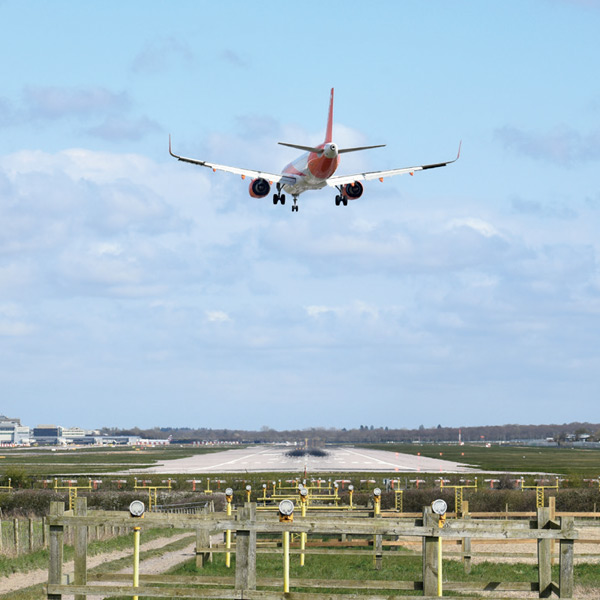 Gatwick Airport: at peak times, an aircraft uses the runway every 80 seconds, so the work of air traffic controllers is vital. 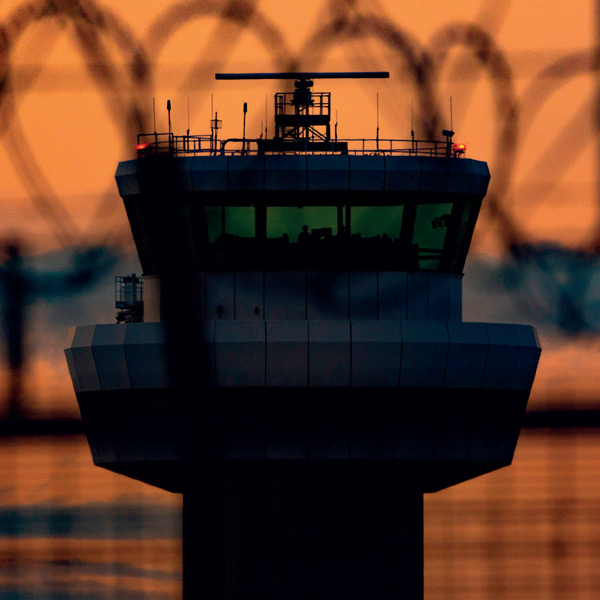 Gatwick’s air traffic controllers work with colleagues in neighbouring countries to keep their single link with the outside world running smoothly.
Post to: