Appointed director-general of Airports Council International – World in June 2020, Luis Felipe de Oliveira couldn’t be said to have had a honeymoon period in the job, getting to grips with running the industry’s pre-eminent trade body at a time when hardly any aircraft were in the sky. Six months on, Greg Noone talks to Oliveira about what key steps need to be taken by both national governments and operators to restore passenger confidence in air travel.

It was all going so well. According to a recent study by Airports Council International (ACI), the number of passengers travelling by air exceeded 9.1 billion at the end of 2019, 3.5% more than the previous year. And the wealth was being shared. While Europe and North America saw the number of passengers passing through their airports soar, this increase paled in comparison to that of developing countries. In Latin America, the number of travellers flying by air shot up by over 4%; in Africa, meanwhile, it was 6%.

What happened next will be a familiar story. The outbreak of Covid-19 in China in December 2019, and its subsequent spread along international flight paths to Europe and the rest of the world in the following months, led governments around the world to impose stringent travel restrictions. Air traffic plummeted. That same study from ACI reveals that in the first half of 2020, airport passenger numbers dropped by an estimated 58.4% compared with the previous year, with overall aircraft movements cut by 41.6%.

In a matter of months, the airlines and airports industry had become a shadow of its former self, drained of its vitality and effectively dependent on the charity of national governments for its survival. In Europe and North America, generous state subsidies have succeeded in holding up the basic corporate framework of the industry. Even so, with travel restrictions still in force across much of the world, this support has failed to prevent many job losses – with significant pain yet to come. According to a recent report by the Air Transport Action Group, 46 million jobs supported by aviation could eventually be lost as a result of the pandemic.

Although it is increasingly likely that the international roll-out of a workable Covid-19 vaccine will begin to take place by early 2021, Luis Felipe de Oliveira is under no illusion that the airports industry will easily bounce back from the events of this year. Appointed in June as ACI World’s new director-general, Oliveira is a veteran of the cargo business, having previously served as chief executive of the Latin American and Caribbean Air Transport Association, in addition to roles with the International Air Transport Association (IATA) and Shell.

According to this consummate industry insider, what the airports industry needs is stalwart support from outside stakeholders – first and foremost, national governments. This, he says, had been sorely lacking in the previous months. “We are not receiving any support, except from certain specific countries,” says Oliveira. “We lost around 60% of the passengers in our terminals and we are set to lose around $1.4bn this year.”

In November, news emerged that several workable vaccines had been tested, with large-scale immunisation programmes planned for early next year and into spring. Although Oliveira believes that this will ultimately lead to a wholesale recovery of the airports industry, the damage done during the pandemic means that any return to normality won’t be easy. “We are now expecting the recovery in 2023,” he says – a prediction that heavily relies on state-sponsored travel restrictions easing in relatively short order. “Tough times are ahead.”

Raining on the parade

Founded in 1991 as the effective voice of the sector, the ACI aspires to foster cooperation between its member airports, and represents their interests in the halls of national governments and international organisations. As such, Oliveira’s appointment as director-general in June 2020 put him in an unenviable position as one of the few figures in the industry not only capable of formulating a strategy for its recovery, but also with a big enough bully pulpit to ensure that his ideas were heard.

“We will always be an airport association focused on delivering advocacy, products and services to our members,” says Oliveira. “However, I truly believe that we could be much more than that – we can lead the whole industry in certain areas. Why am I saying this? Because 60% of the jobs in the aviation industry are linked [to] airports.”

As such, he believes that his job is one of the most important collaborative roles in global aviation – albeit one that has changed markedly in recent months. Like so many others around the world, Oliveira was suddenly forced to work from home. A self-described ‘people person’, he naturally chafed against the restrictions, and found the learning curve for the job steeper as he was forced to manage the airport industry’s leading advocacy group almost exclusively through video calls. Oliveira was also required to travel back and forth a number of times to Switzerland for business and personal reasons. By the time Future Airport first spoke with him in September, Oliveira estimated he’d spent half his time on the job in some form of travel-related quarantine. “I realised that, for people who are travelling around the world, it’s not acceptable and not useful to have the quarantines,” he says.

This goes beyond the living situation of one man and his family. Oliveira firmly believes that the need to stop the spread of Covid-19 across international travel routes ultimately has to be balanced against the interests of a once-vibrant economic ecosystem supported by aviation that has now been brought to a standstill. From pilots and ground crew, to aircraft part suppliers and hotel staff, millions of jobs around the world are now in the balance. With a more nuanced approach and the right application of technology, Oliveira is hopeful that some semblance of normality can be restored to the sector.

Jobs supported by aviation could eventually be lost as a result of the pandemic.

What’s standing in the way, however, is a patchwork of ever-changing border restrictions and quarantine regimes across multiple countries, which make air travel too unpredictable and costly for the average passenger. “We still have airports in lockdown and we still have countries that are in lockdown,” says Oliveira. “We’re still [seeing] a lot of restrictions on travel, and unfortunately we see a lot of governments taking tough decisions, but in certain ways, these decisions are not based on medical evidence.”

Oliveira singles out the UK’s approach for criticism. The country maintains a list of nations from which travellers do not have to self-isolate for two weeks upon their return, based on their percentage of Covid-19 cases. Shortly before our first conversation in September, its government had taken Portugal – a popular destination for UK holidaymakers – off that list of countries, just weeks after it was deemed safe to visit. Notice of the decision was given just days in advance, forcing thousands of people to rush home earlier than expected to avoid mandatory quarantine.

“Putting countries on a blacklist and taking them out of a blacklist is not really a very efficient [way] to allow people to travel with confidence,” says Oliveira.

Any recovery for the travel sector, ACI’s directorgeneral argues, will have to be underpinned by a grand spirit of collaboration between airports, nation states and international organisations. It isn’t good enough, Oliveira says, for countries to continue unilaterally imposing strict controls on movement. And now that several workable vaccines have been discovered, nations around the world have a rare opportunity to work together and restore passenger confidence in travelling by air.

“A consistent approach to testing should be implemented now to promote travel and do away with restrictive quarantine measures,” Oliveira argues – one that utilises a multilateral, risk-based approach to combining testing and vaccination. “Tests and vaccines together will play a key role in the industry’s recovery, providing passengers with a safe travel environment and foster[ing] confidence in air travel.”

This is not to say that any vaccine will serve as a panacea for the industry’s woes. Far from it. “2021, in my personal view, will be the difficult year,” says Oliveira. “Airlines, airports, we won’t have enough cash to continue the high expenditure that we have seen this year, as we wait for the final decision from governments and for the [conditions] on how they open their borders.”

Patently, says Oliveira, the airports industry cannot afford to wait for several months for largescale immunisation programmes to begin. To build a solid foundation for its recovery, the sector has to take action now to boost passenger confidence. He believes that should start with the harmonisation of airport procedures on Covid-19. ACI has been busy championing several initiatives aimed at promoting greater inter-airport alignment, starting with its Airport Health Accreditation programme. The scheme, which builds on existing recommendations from the trade body and the International Civil Aviation Organisation, aims to monitor the compliance of operators with established rules on hygiene and social distancing. So far, 146 airports have been accredited.

ACI has also been lobbying hard for the harmonisation of Covid-19 testing regimes within airports themselves. “We are working very hard with ICAO and with IATA, discussing the protocols,” explains Oliveira.

Not all the initiatives ACI have been championing have been specific to Covid-19. Oliveira also recognises the need for airports to use the opportunity afforded by low passenger numbers to strengthen the fundamentals of their operations for when the industry returns to normal. In November, ACI World called for an international harmonisation in slot allocation rules as the traffic numbers begin their slow recovery in 2021. A resolution passed by the organisation’s World Annual General Assembly also called for the industry to become carbon neutral by the middle of this century, in addition to implementing sophisticated risk mitigation plans to shield critical infrastructure from the effects of climate change.

Measures such as these, Oliveira hopes, will leave a positive legacy from a terrible year. Gradually, the visual manifestations of the industry’s caution – social distancing, mask wearing – will fade away as the majority of the world’s population are inoculated against Covid-19. Even so, ACI’s director-general believes that the sector’s renewed embrace of harmonised practices will remain – and provide a stronger defence against the next emergency it faces. “In certain ways,” says Oliveira, “I believe that we are more prepared now than we were before.” 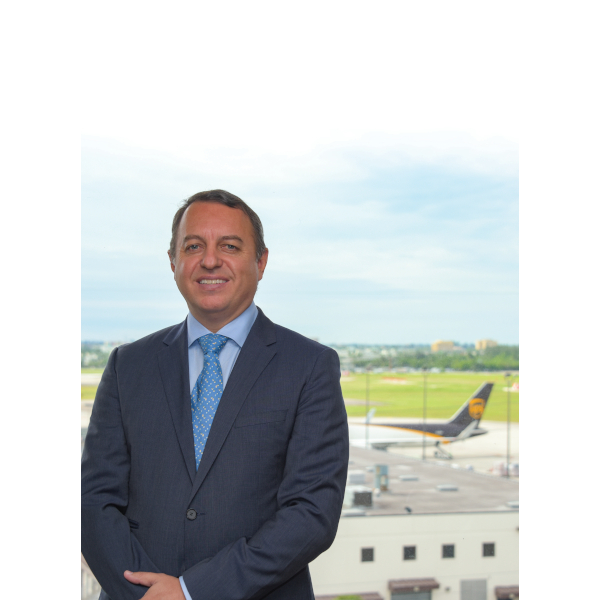 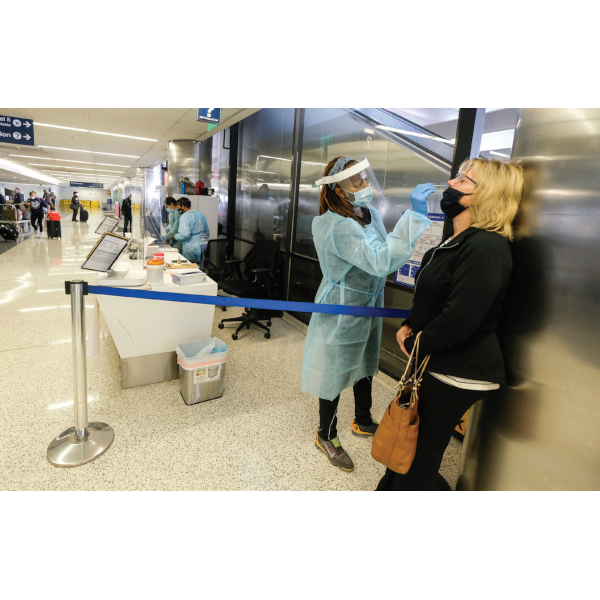 ACI has been lobbying for the harmonisation of Covid-19 testing regimes within airports around the world.
Post to: