As Climate change accelerator, the number of challenges faced by airport operators in winter is increasing dramatically. This is especially true in a weather-obsessed country like the UK – so it’s no surprise that it’s fallen to London Heathrow to figure out a solution. Andrea Valentino chats to James Shapland, transport operations manager at the Met Office, to learn how his colleagues help the airport to predict bad weather, what it is doing to mitigate disruption and how new technology might make winters less miserable for passengers going forward.

On the morning of 26 January 1967, shortly before sunrise, the sky over Chicago opened up and began puffing out snow. Locals did not seem to worry – like most of the Midwest, the Windy City was used to bad weather in winter months, including the odd blizzard. And besides, Chicagoans muttered, they were used to sudden shifts in the forecast. As the famous local saying put it, ‘if you don’t like the weather, just wait a minute’.

But this time, the skies didn’t change. From 5.02am on that frigid Thursday, it snowed for the next 26 hours, as if the clouds had been saving up flakes for a special occasion. “Some of the snow from 1967, there was so much of it, they didn’t know what to do with it,” remembered one local historian. He needn’t have worried. With 2ft of snow on the ground, city infrastructure collapsed. About 50,000 cars and 800 buses were abandoned in the mire, and school kids were stranded in classrooms and gym halls. One woman, whose commute normally took 35 minutes, stumbled home after four hours.

Ravaged, too, were Chicago’s airports. O’Hare was shuttered for one of the longest stretches in its 76-year history. At Midway, south-west of downtown, runways were covered with snow drifts as high as basketball hoops. For a wealthy city, in a wealthier country, in its superpower pomp, all this was a calamity of epic proportions. The chaos was at least somewhat down to a crucial failure on the part of the Chicago’s meteorologists. The meteorologists, residents had been assured on the radio and in the Tribune, had predicted only 4in of snow. Suffice to say that the 23in that finally blanketed the city in just a few hours – compared to the 50in over several months – left a few red faces.

Nor is any of this ancient history. Forecasting may have improved – alongside a cacophony of other snow-busting methods – but sudden blizzards can still kneecap airports just as they did O’Hare. More to the point, climate change is making violent blizzards increasingly common. In 2013, for instance, Frankfurt and a raft of other European airports were forced to shut after the heavens dumped 24in of snow within just a few hours – only for similar weather to be repeated a few years later. Other hubs, from Gatwick to JFK, have suffered the same fate.

More to the point, with climate change on the march, these are problems airports across the northern hemisphere are going to have to face more often. All the same, with the right technology and the right support, there’s no reason they can’t overcome a bout of the white stuff in style.

It’s hard to overestimate how disastrous bad weather can be for somewhere like Heathrow. Before Covid-19 upturned schedules, the airport was shepherding a flight on or off its runways every 45 seconds, or about 475,000 each year. To put it another way, there’s very little leeway for delays – but what if the asphalt gets hit with snow? Things can, unsurprisingly, go very wrong very quickly. To take just one example from 2017, the 10in that fell over London that December led to hundreds of cancellations, resulting in thousands of angry passengers crowding around exhausted officials for 12 hours straight.

Nor, emphasises James Shapland, is this chaos simply a matter of blocked runways. “If you have snow, you will have to de-ice aircraft, and anti-ice runways and taxiways,” says Shapland, a transport operations manager at the Met Office. And because fog frequently follows snow, he adds, airport officials may also have to contend with other challenges. To avoid collisions – and their potentially catastrophic consequences – managers typically increase the distance between landing aircraft or slow down movements on the ground. It goes without saying that this can risk making an already fraught timetable even worse, particularly at busy hubs like Heathrow.

To be fair, airport administrators are clearly not blind to these problems. Even before the 2017 mess, officials were busy polishing what has since become the Heathrow Snow Plan, a 27-page briefing detailing how to react when a storm arrives. This covers all the classics, from anti-icing aircraft stands to a fleet of 109 snow vehicles and 45 support vehicles. Heathrow even uses special aviation-grade grit on its runways that, unlike the salt-based alternatives, doesn’t corrode aircraft.

Nor is the London airport – which has spent £36m in winter resilience equipment since 2010 – alone. Across the Atlantic, for example, Newark recently revamped its own winter weather plan. The same is true in milder climes too, with Rome’s Fiumicino and Madrid’s Barajas just two of the Mediterranean capitals boasting their own snow plans.

But what if an airport is caught off guard? What if, like O’Hare in Daley-era Chicago, administrators are surprised by a squall the meteorologists didn’t predict? That, in fact, is what happened to Heathrow back in 2017. After being promised relatively gentle weather, British Airways didn’t cancel flights until the last minute – but then had to scramble de-icers for aircraft already on the runway after an unanticipated bout of freezing rain. Given the disruption ultimately wrecked the plans of around 50,000 BA passengers, the consequences of getting these predictions wrong can be colossal.

Until very recently, working at the Met Office meant commuting to the organisation’s headquarters, a sparkling glass and steel estate in an Exeter suburb. But nine years ago, just as our awareness of climate change was reaching new peaks, it was announced that a crack team of ‘embedded forecasters’ would leave the west of England for Heathrow. In various guises, they’ve been there ever since, working with airport administrators and air-traffic controllers to get runways and aircraft ready for whatever the sky might offer up.

Given the shambles of 2017 – as well as a similar storm in 2010 – all this makes sense. This is especially true given integrating meteorologists into airport infrastructures has become all the rage far beyond London, with JFK and Charles de Gaulle just two of the major hubs to boast their own teams of weather experts.

Listen to Shapland describe how these embedded forecasters actually work in practice and it’s hard not to be impressed. Rather than simply explaining how they think the weather will go, they give advice and lobby for action, and essentially act like just another arm of airport staff. “Our forecasters will normally work directly alongside duty operations managers, planners, staffing and engineers,” Shapland explains. “The teams sit alongside their key customer operation units, allowing them to feed information to the customer. This ability to be a direct team member – listening into the challenges of the day – allows the forecasters to provide any information directly, without having to await a phone call or email.” Even more strikingly, he continues, colleagues frequently help out even in areas only tangentially related to their core job, like warning about how a snowstorm could disrupt planned construction work.

Having a strong sense of what’s coming next has huge practical benefits, both immediately and in the weeks and months. “Ideally, we will be able to highlight potential weather challenges with enough time to allow planners to adjust the operation effectively,” explains Shapland.

In practice, he says, that covers everything from tying down loose objects, to stocking up on grit and bringing in extra crews for de-icing. That last point posed particular problems for Heathrow in 2017 – but after being warned about the ‘beast from the east’ storm a few weeks in advance, the airport managed to avoid embarrassment the following year.

Have an ice day

More broadly, working closely with the experts can help airport administrators plan over the longer term, too. With climate change galloping on unabated, there is plenty to think about. If, for instance, global temperatures continue to rise, might runways need to be built longer, given aircraft engines tend to be less efficient in warmer weather? Conversely, if some parts of the world are going to experience chillier Januarys – Chicago, for example, suffered spells of -31°C in 2019 – perhaps airports should invest in heated runways that can melt ice without grit? And if the £150m price tag for heated tarmac is too much to stomach, perhaps airports should at least consider special ice-busting chemicals for their runways, as Iceland’s Keflavik Airport does every winter.

These are ultimately business questions, of course, but Shapland is confident that he and his fellow forecasters can help answer them. “As supercomputers get more powerful,” he says, “the ability to extract greater detail or resolution from numerical weather prediction models increases.” That’s shadowed by better data. At the moment, the Met Office and other meteorological agencies get much of their weather information from aircraft as they fly through the air. But without decent humidity data – which up to now has been scarce – making accurate predictions can be tough. Fortunately, the Met Office is working to plug the gap, exploiting so-called ‘Mode S’ technology to consistently link aircraft with ground stations, giving forecasters accurate weather information on the fly. If only the hapless officials in 1960s Chicago could come back and see that.

Flights took off from Heathrow every year before the pandemic.

Passengers at Heathrow were disrupted after sudden winter weather in 2017. 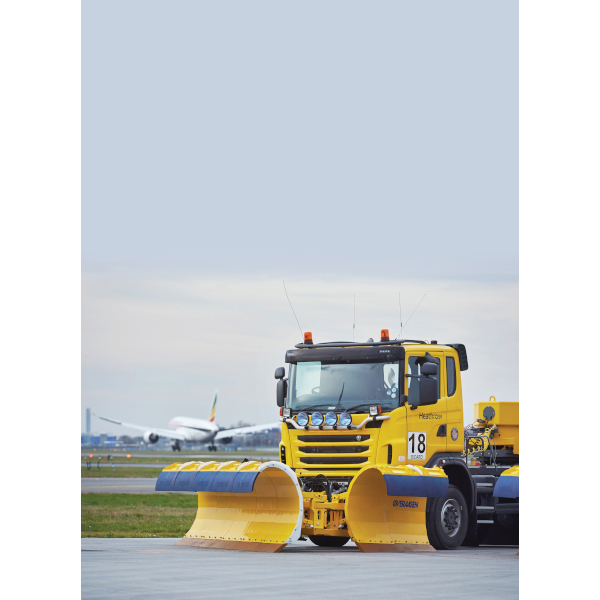 Heathrow Airport has spent £36m on winter resilience equipment since 2010. 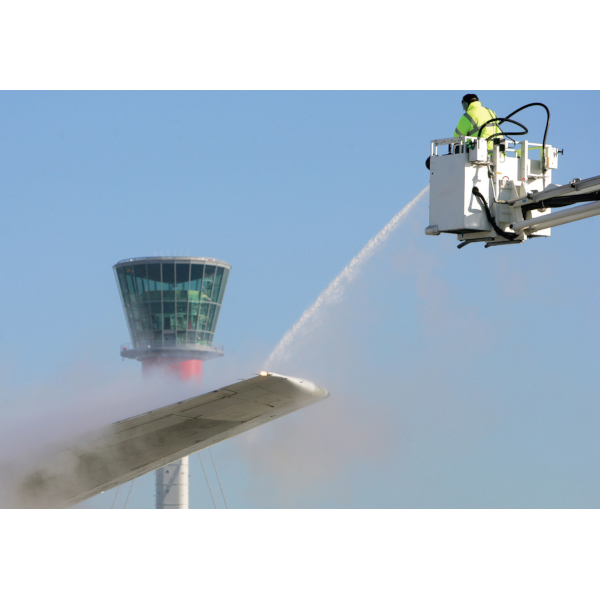 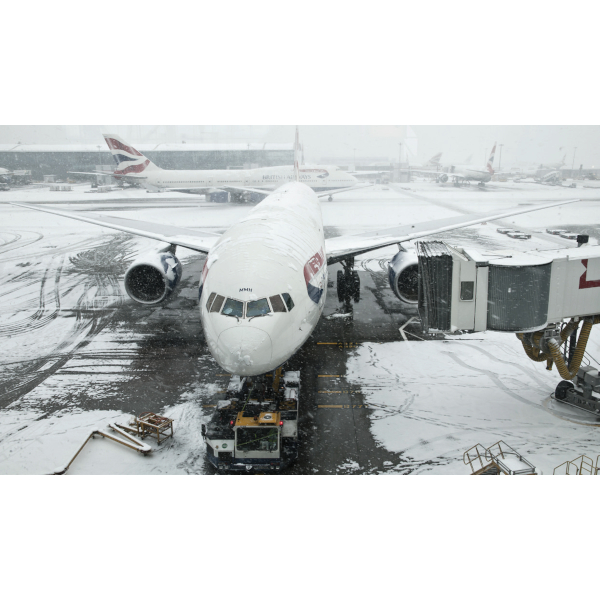 As many parts of the world experience colder winters, airports may need to invest in heated runways or special de-icing chemicals.
Post to: