The UK’s largest airport has lost £3.4bn in revenue since the beginning of the pandemic and passenger numbers are still down by 60% compared with pre-Covid-19 figures – yet, Heathrow CEO John Holland-Kaye remains optimistic for the future of his airport and the industry. Elly Earls finds out why Heathrow Airport is focusing on recruitment and reducing carbon emissions, and why now is the time for the UK air travel industry to pull together and adapt for the future.

As Heathrow Airport approached its 75th year of operations, widespread travel restrictions and mandatory quarantines halted everything in its tracks. The UK’s largest airport went from welcoming over 15,000 passengers an hour to fewer than 400 and aviation businesses that had been operating successfully for years faced the prospect of letting tens of thousands of staff members go.

John Holland-Kaye, who became Heathrow’s CEO in 2014, remembers that one of the toughest moments of the crisis for him personally was when he had to inform his colleagues that he didn’t know when it was going to be over, and that the only way forward would be to pull together and make sacrifices.

Almost two years on, Heathrow has lost about £3.4bn in revenue and passenger numbers are still 60% down on pre-pandemic levels, due in part to end-of-year cancellations over Omicron-related travel restrictions. Yet, there is cause for optimism. In November 2021, Holland-Kaye stood at the heart of the airport helping British passengers check in for their first flights to the US in over 600 days. It felt like a turning point for the airport – after all, the US market accounts for 20% of Heathrow’s passenger traffic and 31% of its cargo tonnage.

“The atmosphere was electric and I was reminded of just what a key role our industry plays in society,” Holland-Kaye said in a speech to the Air League, an aviation and aerospace non-profit organisation, and the UK’s largest provider of scholarships and bursaries in the industry. “We bring people together – parents, children, old friends and new business partners. And despite the challenges of the Covid crisis, there was a common cause that united our sector in a way I haven’t seen before.”

Clearly, the aviation sector is not out of the woods yet. The Omicron variant has resulted in countries like Israel and Japan temporarily prohibiting foreign visitors, and the UK and other nations have tightened restrictions again at short notice, with enormous knock-on effects for the travel industry.

“There are huge challenges ahead of us and significant changes we all will need to make,” Holland- Kaye stressed. “My message is that we should harness that spirit of joint effort that saw us through the worst of Covid to overcome the hurdles in front of us. Aviation is a force for good in the world and the unity we’ve demonstrated over the past two years is a powerful force that we should harness and build on.”

A crucial step towards recovery will be rebuilding the UK aviation industry’s workforce. “No sector of the economy has been harder hit by the pandemic than ours and we will be the last to fully recover,” Holland- Kaye remarked. It’s estimated that about one in four jobs in UK aviation was lost in the pandemic.

The first task towards that goal will involve upskilling the UK’s existing teams. “I always knew that our sector was full of talented and committed individuals, but it isn’t until you give people the chance to step up under severe pressure that you see just what they can deliver,” Holland-Kaye said. “Upskilling the talent we already have to unlock their full potential has to be our starting point. But even as we upskill our existing colleagues, we will still need more people to support our passengers on their journeys as they return.”

In mid-November 2021, Heathrow announced its recruitment drive for over 600 new frontline roles, including security officers and engineers, to ensure the airport is well equipped to handle a predicted rise in passenger numbers ahead of summer 2022. The new security and engineering jobs will be among the first frontline roles to have been created at Heathrow since the start of the pandemic, with new recruits set to undergo an extensive training programme to achieve the required security accreditations.

The UK’s aviation industry will have to look not just at the talent pools they are used to tapping into, but also into new places, as Heathrow are currently in the middle of doing. “As we recruit, we have a chance to drive a step-change in the diversity of our teams. Our goal is to have every level of our organisation reflect our local communities,” Holland-Kaye said.

However, the competition for people is fierce – even within the UK, the difficulties faced by the aviation industry over the past two years has led to a considerable brain drain to other areas. “Many who would be a natural fit for the roles we have available have moved on to other sectors or are worried about taking a job in travel for fear that restrictions could come back,” Holland-Kaye acknowledged.

Another area of focus for Heathrow is reducing carbon emissions and advocating for the rest of the industry to do the same. At the start of 2020, the UK aviation sector became the first in the world to commit to net zero by 2050, with Heathrow playing a key role.

In addition to recently incorporating the first shipment of sustainable aviation fuels (SAF) into its fuel supply system, all of the airport’s infrastructure runs on 100% renewable electricity, with plans under way to switch away from gas heating at the airport by the mid-2030s, becoming fully zero carbon.

Fewer passengers through Heathrow in 2021 compared with 2019 figures.

Holland-Kaye says the only way to reach net-zero aviation by 2050 is to change the fuel used in existing planes across the industry from kerosene to SAF, which is made from agricultural and domestic waste but could also be produced synthetically by combining carbon and hydrogen. There are already a range of production technologies, some of which have been around since the 1930s, but production is small scale and expensive, with SAF currently two to four times more expensive than kerosene.

The good news, however, is that you can blend SAF with kerosene in existing planes, so the faster you scale up, the faster you decarbonise. “Unlike other sectors, you don’t have to change the entire system, just the fuel. You can fly from Heathrow to Moscow with SAF and return using kerosene. This is a critical advantage over electric and hydrogen-based solutions, which require both ends of the route to have the same facilities,” Holland-Kaye said. “We need a progressively increasing mandate from governments for an increasing proportion of SAF to be blended with kerosene.”

In September 2021, 60 companies in the World Economic Forum’s Clean Skies for Tomorrow Coalition pledged to power global aviation with 10% SAF by 2030, sending a clear signal to suppliers to start investing in production of SAFs. But the UK alone would need 12–14 SAF plants at a cost of £3–8bn just to reach that goal. “Getting to net zero by 2050 will take hundreds of billions of dollars of investment,” Holland-Kaye noted. “That may sound daunting, but when we talk to bankers, they say this is one of the most investable green projects.”

At present, most new SAF investments are going to the Netherlands, Canada and the US, but Holland- Kaye would like to see UK operators using government investment and loan guarantees to bring them to Aberdeen, Teesside and the Humber, replacing the country’s legacy oil industry.

“Investing for our passengers and scaling up SAF capacity are key stepping stones to ensuring the UK’s aviation sector builds back stronger from the worst of the Covid crisis. These investments will give the UK on a solid foundation to pursue its ambitions in the decades ahead,” he stressed.

Over the next several years, Holland-Kaye plans to keep the pressure up on decarbonising the sector. “We need a mandate for 10% SAF use by 2030, government funding to scale-up production and an agreement at ICAO [International Civil Aviation Organisation] next year for net zero by 2050,” he summarised. “The agreements at COP26 are great, but ICAO is a rule-making body and we need binding agreements.”

He is also committed to protecting investment in passenger services to maintain the UK’s world-leading aviation status and building a diverse skills pipeline of future aviation leaders who will pick-up the controls of our sector where he will ultimately leave off.

Finally, he would like to see a clear aviation strategy in the UK that makes trading and travelling through its airports more efficient, aggressively pursues increased global connectivity and ensures every part of the UK has guaranteed access to Heathrow. He believes the Omicron variant shouldn’t be cause for too much panic, calling it a ‘speed bump’ in the sector’s recovery.

There is still a long way to go to get back to pre- Covid passenger levels. But Holland-Kaye’s overarching message is that the sector should not be discouraged. “Every industry needs to adapt for the future, and they need to do it now – the aviation industry is not an exception. Right now, we have an open door in front of us to reinvigorate the UK’s aviation industry for the next 75 years. The consequences of the choices we make in the next few years will determine if future generations of Britons will continue to enjoy the full benefits of a vibrant aviation industry.” 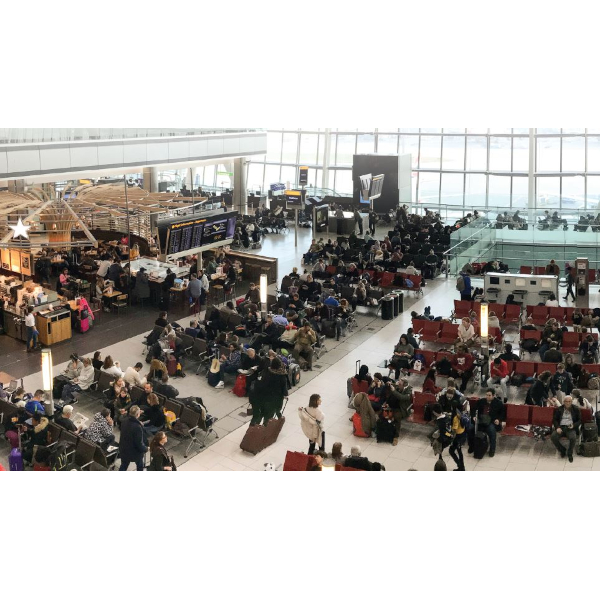 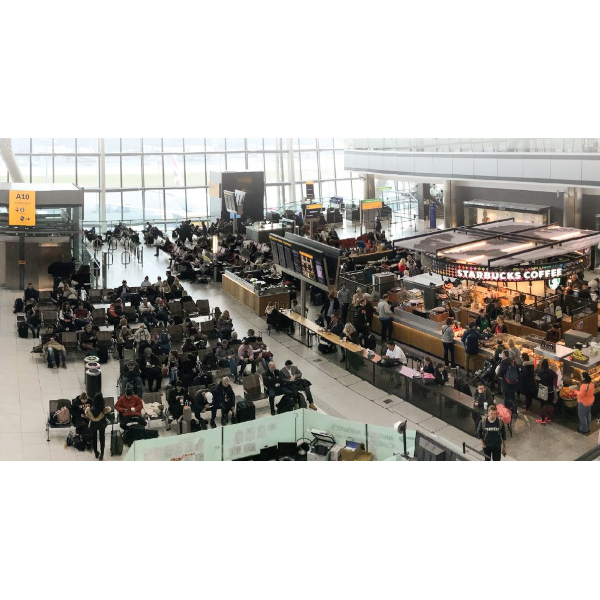 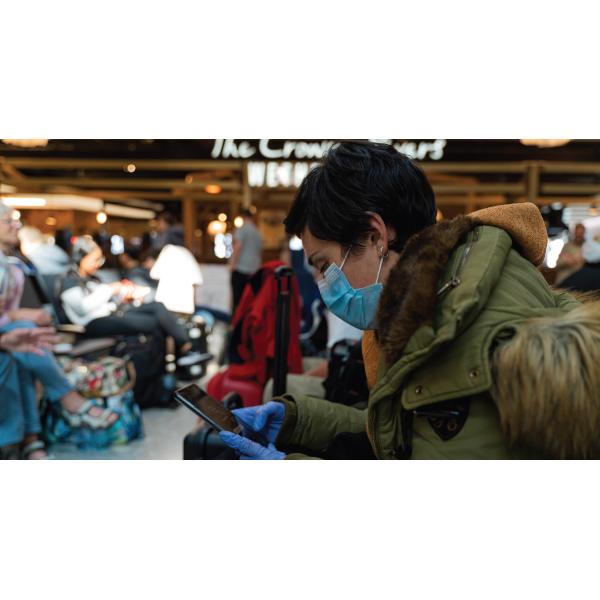 In November 2021, Heathrow welcomed passengers travelling to the US for the first time in more than 600 days.
Post to: