Tracking social-media posts in 2014 gave Malaysia Airports a reputation upgrade. Shahid Shayaa, founder and managing director of Berkshire Media, explains how analysing the emotions behind social data can show airports a new way to engage with their passengers.

Social-media data is, ultimately, the voice of the consumer; for airports, it is the voice of the passenger. These are the people using the airport's facilities and shopping at its retail businesses. By listening to what passengers say and understanding what they want or need, airports can strive toward providing the best experiences.

Social data analysis can be a useful tool for airports of any size, whether they want to introduce changes or make improvements based on public sentiment. It provides answers to myriad questions: Is this particular action necessary? Is this action based on comments that are anecdotal? Is there a way to approach this that will be cost-effective?

Tracking and analysing the complaints made on social media is vital for airports to successfully identify the best way to solve issues, big or small. This could mean issues that involve a communication strategy or, equally, issues that require operational improvement. Social data analytics is more than just monitoring what the public says about an airport; it's also about understanding passengers and turning publicly available data into actionable insight. In addition, it is about connecting the various departments within airport management to strive towards a common goal that is beneficial to all.

Reach out and draw in

Social data analytics can help airports understand and take action on areas that require improvement. It can also alert airports to items or incidences that require immediate attention. Using data analytics, they can more easily distinguish what to focus on, an issue's importance and the type of communication or engagement that is required - with the ultimate goal of improving passenger experience and communication.

The social data element is a way to reach out to passengers, engage with them and formulate awareness in certain aspects of airport operations, such as safety, cleanliness or service. But, says founder and managing director of Berkshire Media Shahid Shayaa, "it is not about the tool that you use in analytics, but the outcome that can be achieved by using these tools".

Berkshire Media provides social data analytics, digital communication consultancy and digital media marketing to clients in a range of industries. In 2014, in conjunction with the opening of the massive Kuala Lumpur International Airport 2, it was commissioned to work with Malaysia Airports Holdings Berhad (MAHB) on a project with two goals: to understand passenger behaviour by measuring the perception of the group on social media; and to manage Malaysia Airports' corporate reputation online. Overall, it dramatically raised public perception of the company on social media.

"MAHB's audiences have grown tremendously. Its voice is heard, what it says on social media matters and gets written about, what its passengers say is heard and improvements are made - some of which are immediate - and, every day, it is striving to communicate better and strengthen operations. It has become very sophisticated and the best thing is that it understands the importance of social data," says Shahid.

Analysts began by strengthening the airport's official public Twitter and Facebook channels along with a campaign encouraging feedback. Challenges included the sheer number of items to track and analyse, and the task of shifting a wide public perception toward the positive. Berkshire Media and MAHB's social-media team combined social data analytics with customer care and engagement, tracking over 200,000 posts, analysing them for sentiment, emotions and feedback, and reacting to complaints with targeted operational improvements. Remarks about walking distance, for example, led to the installation of 16 travelators to ease passenger convenience and increased marketing of the free buggy service.

One of the specialised methods used by Berkshire Media is sentiment and emotion analysis, which looks at social posts and uses an algorithm to tag them based on positive, negative or neutral sentiments and emotions such as joy, fear, sadness or anger. The sentiment and emotion analysis engine and methods were developed based on the analytics requirements particular to operating in Malaysia, and Shahid believes that this has given the company an edge that will put it ahead of the pack, internationally.

"We have tested many text-analytics tools out there to help our analysts understand public sentiment, but we found that they are unsuitable and lacking in accuracy, particularly as we come from a country where the people are multilingual," he says. "In Malaysia, you might come across multiple languages in one social-media post and, thanks to texting language and its users, we see the advent of various abbreviations, slang and new words in social media. Developing a text-based sentiment analytics engine that is language-independent is just a natural step toward making our lives easier."

Accuracy in analysing public sentiment is important because it presents a perfect case for improvements, and will trigger crucial decisions and actions. It is also important for sentiment analysis to be domain-specific, customisable and flexible; this is where the importance of domain expertise among Berkshire Media's analysts comes in. The basis for their sentiment analytics engine is the same as that used for emotion analytics - a method that has proved useful for post-campaign analysis and reputation management, among other things.

Sentiment analysis of social data is a good indicator of general public sentiment and, based on these measurements, an airport can plan and strategise its communication and campaigns accordingly. With certain issues, one can easily predict the sentiment, but accurate measurement can turn up some surprising insight. What one might think is a minor issue could be a major problem to solve, and what might seem at the outset as something damaging could be identified as a problem that can be easily mitigated, or not as far-reaching or impactful as imagined.

At the same time, sentiment analysis can also be a predictor of risk. Emotion analysis can give an airport a clear measurement of what passengers or the general public feel about their service, for example, or their marketing and communication campaigns. Is the airport doing the right thing, and do people get it? Are people actually positively affected by it, or are they feeling indifferent?

"What we're doing is bringing the science into communication," says Shahid.

Go with the flow

Airports using social analysis have changed the way they operate to be more responsive. Improvements and positive changes are made quickly and communicated out in a process that is beneficial to the airport and its passengers alike. They are also more aware that every action they take is important, immediately impacting on their reputation and brand. Social analysis also helps airports operate more effectively, which, in turn, affords passengers a better experience.

Social media moves at an extremely rapid pace, however, and those looking to do more than track their Twitter follower count may find themselves quickly left behind without guidance. Social media is dynamic and constantly evolving, and new social networks appear regularly.

"The social network that is relevant today may not be the one to give you the answers to your business problems in the future," says Shahid. "It may all be just videos and images in the future - people may no longer be interested in expressing themselves in words or text. Airports must be prepared to face these challenges. They must be ready to communicate how the masses communicate. If children nowadays like their news in bite-sized image-heavy formats, maybe that's what to move towards in the future. If Facebook or Twitter are where people get the latest updates, that's where the news should appear first."

Data privacy may also be an issue, although Shahid is assured that the solution to this is simply to use the data responsibly and for the good of the passengers. After all, the social data collected is publicly available information.

"People want airports to know what they say and how they feel - otherwise, they wouldn't post about it publicly," he says.

The point, for the Twitter users mentioning an airport in their tweets, or the people writing on its Facebook page, is to see improvement based on what they have spoken out about. Consumers want to feel like companies care. Social media is more than just a place to share pet photos or talk about the latest party you've been to; it is also the voice of the people. And, as long as airports listen to them with empathy and turn that insight into action, positive changes can, and will, be made. 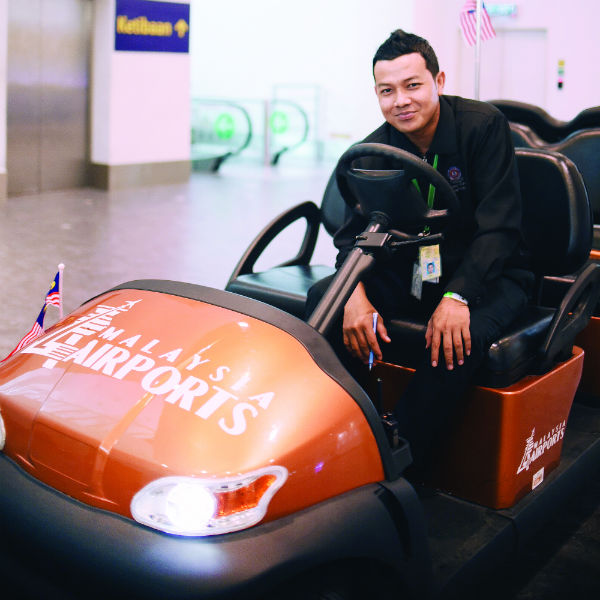 #MyAirportMoments: Malaysia Airports’ 2015 Living the Brand campaign saw airport staff, partners and passengers speak about their experiences and what they liked about travel in Malaysia, KLIA and klia2.