Saab - The evolution in the skies: virtual air traffic control

The Saab Remote Tower System, developed in collaboration with the Swedish air navigation service provider LFV, has great potential to significantly reduce costs and increase the safety of air traffic control. This virtual technology has had the added capability of enhancing aerodrome control for all classes of airports, including large international hubs.

Nine years in the making

Until April 2015, traditional ATC services at Örnsköldsvik Airport, based on direct human observation from a high tower, were the basic solution for operations. That was the past; now, the controllers use high-definition cameras, specially designed pan-tilt-zoom cameras and an environmental protection system on a mast at Örnsköldsvik that project the outside picture onto panoramic displays at the remote centre 140km away. This is not a revolution - It's evolution, taking ATC operation into the 21st century.

The development of the remote tower service concept started in 2006 to reduce the capital cost of infrastructure at relatively low-traffic airports, as well as to address the inefficient use of highly trained controllers, who may be handling only a few flights a day.

By co-locating the control of multiple airports at a common remote control centre - which can be located anywhere - huge gains in efficiency are achieved. A team of controllers can be allocated more effectively, rendering smaller airports more economically viable and extending their operating times.

All this depends, of course, on the reliability of the communication infrastructure and on ensuring that the system integrity remains intact even in extreme weather conditions. These concerns were shared by the developers and the licensing authorities alike. Saab's long experience of supplying hardened communication systems to the military and its healthy cooperation with air navigation service providers played a significant role in successfully meeting these challenges.

The Saab Remote Tower System has been installed and tested at different locations around the world - at sites in Norway, two sites in Sweden, one in Australia and one in the Netherlands - and for different applications, with very promising results. The latest sites under contract are in the US and Ireland.

"With this international footprint, along with the world's first operationally approved system meeting ICAO rules and regulations, the interest in this technology from larger airports around the world has increased dramatically," says David Shomar, vice-president - civil security for Middle East and north Africa operations.

This is the next step in the evolution of virtual aerodrome control. Saab's contingency tower solution uses a high-definition out-the-window display duplicating the environment that the air traffic controllers are used to, and provides visual and technical enhancements without changing the operational procedures that are in place. This approach reduces the need for any retraining of controllers while giving them the added tools needed to safely manage increasingly complex, expanding airport operations.

Saab has looked into the future and accepted the challenge to lead the way in meeting the obstacles ahead. The evolution continues, and with Saab's innovative solutions, air traffic control will meet that challenge with confidence.

All on display: the system uses high-definition and specially designed tilt-and-zoom cameras to create a real-time feed at the remote tower.

All flights at Örnsköldsvik airport on Sweden’s east coast are now being controlled from Sundsvall, 100km to the south. 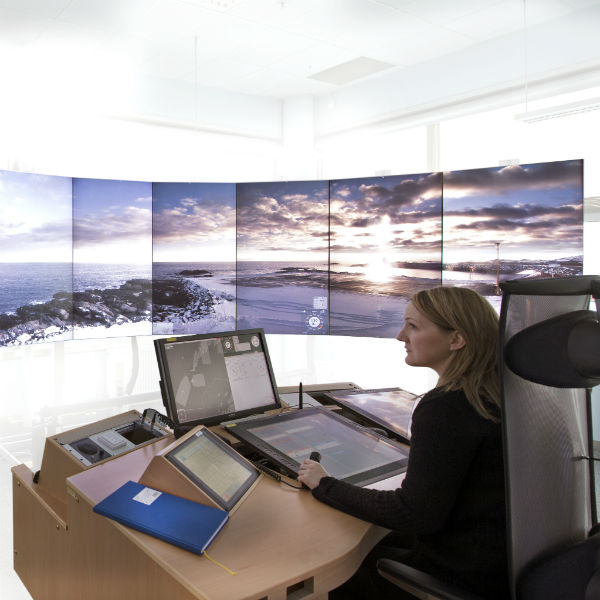 In Norway flight operations in Værøy and Røst are controlled from Bodø.