Comsoft Solutions - The future of multilateration

Planning future surveillance operations requires tapping into the power and capabilities of ADS-B and multilateration systems. Comsoft Solutions' Mike Sharples explains how a new algorithm takes this technology to the next level.

ADS-B and multilateration (MLAT) have become well established as cost-effective additions to secondary surveillance radar (SSR), as gap fillers or as coverage extension systems. The flexibility, modularity and scalability of these technologies, including the ability to transition seamlessly from ADS-B to MLAT using the same ground-station equipment, is also seen as an attractive upgrade path to total SSR replacement.

As SSR systems approach end-of-life replacement, air navigation service providers (ANSPs) have the option instead to opt for a low-power, low-infrastructure and low-maintenance alternative. Using MLAT also means they can achieve this with a much greater degree of flexibility in tailoring coverage to operational requirements.

Deployment can begin with a single ground station, bringing ADS-B coverage to where surveillance had been previously unavailable. Adding ground stations can inexpensively extend this coverage. When a sufficient number of sites with overlapping coverage have been installed, the option to move to MLAT is immediately available. MLAT is fully backward-compatible with existing SSR transponders and forward-compatible with ADS-B. A newly installed MLAT network can not only track ADS-B-equipped aircraft, but also continues to track non-ADS-B traffic through replies from mode A/C and mode S transponders.

MLAT can operate passively against a background of existing SSR installations, but can also operate with its own interrogators - usually added at one or more of the receiver sites - thus complementing or ultimately replacing SSR ground installations. This makes MLAT extremely efficient, as it only needs to interrogate for information not acquired by passive listening. So, the technology offers a simple evolution: ADS-B offers a complement and extension to SSR; ADS-B hardware can naturally be extended to MLAT; and MLAT provides a flexible and cost-effective route to SSR replacement.

All in good time

The key to an accurate MLAT system is timing - specifically, the need to synchronise many different transmitters and receivers that may be spread across a very large area. The timing of these distributed devices must be matched to extremely tight tolerances. If the timing is off by just a microsecond, this would correspond roughly to a 300m positioning error - even in ideal geometry.

Where the geometry of the receivers is not relative enough to the target position, this error can be much larger (an effect known as dilution of precision). Therefore, manufacturers design to synchronise their MLAT systems to much shorter times than this, typically to a few nanoseconds.

Unsurprisingly, MLAT manufacturers look to GPS for their synchronisation across wide areas. Access to an accurate clock that is globally and freely available is far too tempting to ignore, but how safe is it to place system dependence on the continuous availability of GPS? The standards for wide area multilateration (WAM) require such systems to cope with a GPS outage of up to 30 minutes. But what if the outage was much longer?

STaC is a new approach to system synchronisation developed by Comsoft Solutions. STaC - standing for simultaneous tracking and calibration - greatly reduces the need for GPS (or other wide-area timing source), and in some circumstances can remove the dependency entirely. Certainly, STaC adds a high degree of resilience to the non-availability of such sources for extended periods. With STaC, once the MLAT system is up and running, it can remain self-synchronised through any loss of GPS capability, and in principle this can be maintained indefinitely.

Comsoft Solutions has developed STaC thanks to expertise in the mathematics of tracking algorithms. The ability to use similar processes to self-calibrate an MLAT system was quickly recognised and STaC was born, and a European patent was granted. The new technique is currently in an implementation-and-evaluation phase with the intention of rolling out both new and currently installed systems at the end of 2017.

The advantages of MLAT

MLAT is also suitable for surface-movement systems at airports. Used in conjunction with surface movement radar (SMR), MLAT provides the surveillance basis of advanced surface movement, guidance and control systems (A-SMGCS). Airport MLAT systems will use similar or identical hardware to wide-area systems, once more emphasising the way MLAT can be evolved and scaled to meet the operational requirements.

MLAT also provides a level of redundancy due to its distributed-network design. If one ground device or site (sensor or transmitter) suffers an outage, then operational coverage can still be maintained. This is known as N-1 redundancy but systems can be designed with even greater levels of redundancy. For example, an ANSP may place a requirement for N-2 redundancy in certain types of airspace.

Further advantages of MLAT include:

The ANSP of Iceland (Isavia) manages one of the largest airspaces in the world and operates an ADS-B network supplied by Comsoft Solutions to support its air traffic services in this region. This network is integrated with additional Naviair ADS-B sensors for Greenland and the Faroe Islands, creating a transatlantic surveillance corridor, connecting Europe and North America. All surveillance services were integrated by Comsoft Solutions' SDDS-NG and EUROCONTROL's ARTAS. Isavia provides unified operational surveillance coverage in the Reykjavik Control Area, with improved service, reduced costs and environmental benefits.

ANSPs have a clear evolutionary path for surveillance technology. ADS-B offers a complement and extension to SSR; ADS-B hardware can be extended into MLAT; and MLAT provides a flexible and cost-effective route to SSR replacement. MLAT systems will match SSR performance for en-route and TMA operations, but can also meet requirements for lower separations and for specialist applications such as parallel runway monitoring and A-SMGCS.

A small physical footprint and low power consumption of MLAT hardware makes it ideal for deployment on existing infrastructure, providing an economically viable solution. Innovative algorithms such as Comsoft Solutions' STaC offer complete resilience against GPS outage, which is particularly important for wide-area systems. Comsoft Solutions is a supplier of Quadrant ADS-B/MLAT systems, and integrates all surveillance services with its SDDS-NG and EUROCONTROL's ARTAS Tracker.

When considering future surveillance operations, the abilities of ADS-B and MLAT should definitely be explored. 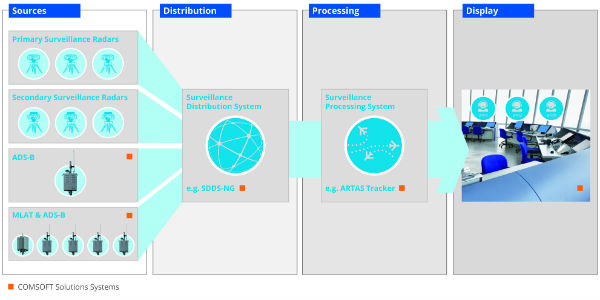 Comsoft Solutions is a supplier of Quadrant ADS-B/MLAT systems, and integrates all surveillance services with its SDDS-NG and Euroncontrol’s ARTAS Tracker.

The future of multilateration provides a flexible and cost-effective root to SSR replacement. 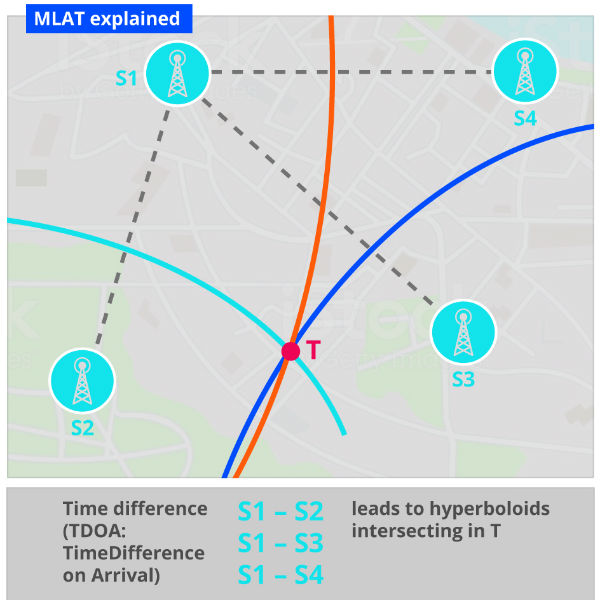 An illustration of MLAT surveillance. 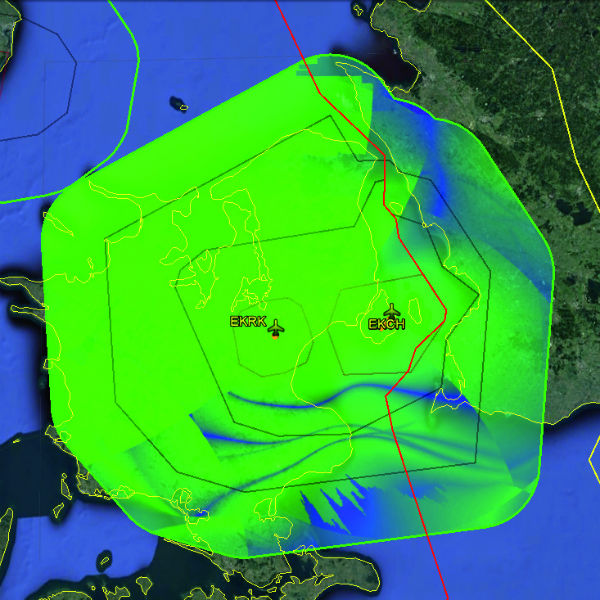