Blue skies above, green grass below 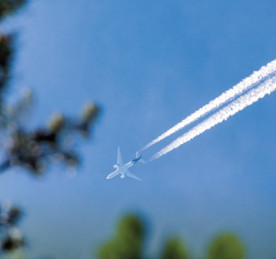 Vestiges of the landscapes that existed long before airports linger in their names. Heathrow was once just a row of cottages in a heath, a place where flowers grew and couples picked wild gooseberries between the hedges. Malpensa was a traditional Lombard farmstead, built in 1789, where families bred silkworms and tended to orchards of cherry trees. Nor is Europe alone. Before the airport came, the Tokyo suburb of Narita was best known for the Naritasan Shinshoji Temple, first built in 940 and still serving the district; peasants farmed the area for generations.

Now, this slower world feels very remote. Passenger numbers reached four billion in 2017, a 7.3% increase on the previous year, and more and more space is being devoted to new terminals and runways. This is especially true in developing countries. In India, for example, Bengaluru recently announced a $2 billion expansion. Plans in China are even more astonishing: developers aim to build over 200 new airports by 2035.

But even as the superpowers of the next century gouge steel into fields and copses, the old heartlands of aviation are looking the other way. From aeroponic gardens to green walls, airports across the world are uprooting our ideas about terminals as drab concrete warehouses, enticing trees and flowers from car parks right up to the boarding gates. Apart from helping to calm passengers, these initiatives can also really help improve the local environment – and save some money along the way.

C$9.1 billion
The cost of the YVR 20-year expansion plan, which consists of 75 projects.
YVR

Vancouver is a green town. This is true both literally and metaphorically. The city helped bring about the environmental movement in the 1970s, and now has the lowest levels of greenhouse-gas emissions of any big city in North America. Vancouver is just as known for its glittering natural beauty. Forests tumble down right to the suburbs, clasping the city between the uplands and the sea. Look north from the downtown skyscrapers, and the mountains stretch on and on, a rough green brush stroke against the Pacific sky.

It is perhaps fitting, then, that Vancouver International Airport has followed a similar path. “We pride ourselves on our connection to our unique sense of place, which is the airport’s reflection of our beautiful province and its diverse cultures,” says Marion Town, environmental director at the Vancouver Airport Authority (YVR). “Emphasising green design contributes directly to our vision to be a world-class sustainable hub airport.”

To this end, an ambitious environmental management plan forces airport bosses to take conservationism seriously, whether that means fixing air quality or cutting noise pollution. And nor is it just talk: Vancouver has managed to slice CO2 emissions by 20% in the four years to 2016, and plans further cuts by 2020. Nor is Vancouver unique. Over the last decade, airports across the world have been slogging towards a greener future. Munich International, for example, aims to cut its carbon emissions by 60% by 2030, and over half of major European airports have integrated environmentalism into their operations.

For Marion Town, none of this is very surprising. As passengers become increasingly concerned about the environmental costs of flying – many Swedes now worry about flygskam (‘flight shame’) every time they take a flight – airports have to keep up. At the same time, Town continues, protecting air quality and beautifying terminals offer other advantages, especially as global passenger numbers continue to soar: “Adding to the overall enjoyable passenger experience is key when we consider that YVR competes with airports around the world for passengers, who want the best airport experience possible.”

Customer pressure dovetails with more formal obligations. A flurry of directives from Brussels, for instance, now requires European airports to tackle noise pollution. The FAA has similar rules across the Atlantic. Vancouver, for its part, is in a particularly tight spot. Like all Canadian airports, it is not-forprofit, meaning airport executives are accountable to local community groups rather than shareholders. As Town makes clear, “Our communities want us to continuously improve our environmental practice.” No wonder: five protected habitat areas skirt the airport, and flocks of migratory birds squat nearby on their way to Patagonia.

Before you even enter the terminal at Vancouver International, you are confronted with a vista every inch as stunning as the peaks that flank the city. It stands 18m high and 12m wide, a panorama of ferns and shrubbery. But unlike the nearby mountains, this natural wonder is entirely humanmade. Home to 28,249 local plants, painstakingly tangled into 2,173 panels, the YVR green wall is one of the largest of its kind in North America.

The wall represents part of a far broader trend. Prodded by passengers, lawmakers and the threat of environmental disaster, airports all over the world are fighting to bring greenery into their concourses. In Chicago, for example, O’Hare plans to smatter plants and gardens across a shiny new terminal, due to be unveiled by 2028. Earth’s sixth-busiest airport has form: herbs and vegetables from its aeroponic garden already grace plates in airport restaurants. Further afield, meanwhile, airports from Singapore to Seoul have eagerly installed their own gardens.

Not to be outdone, and on its way to becoming the biggest airport in Canada, Vancouver has green ambitions of its own. When it begins welcoming passengers next year, its new international pier expansion will be centred on a clump of Douglas firs – mammoth trees that can sometimes grow upwards of 100m. Rocks and streams add to the sense of place, especially as the whole area will be open to the elements. In other words, passengers will be able to feel the Pacific breeze against their cheeks, even minutes before a flight, and snow will fall by the boarding gates in winter.

None of this is cheap – the renovations are part of a C$9.1 billion (£5.52 billion) expansion plan – but Town is confident the expense is worthwhile. To explain what she means, she wheels back to the YVR green wall. Originally installed in 2009, the installation has served the airport in various capacities for over a decade. Apart from beautifying the entrance and cleaning the air, it helps dampen noise from the Canada Line, the train that carries airport passengers to downtown Vancouver.

This blend of artistic and environmental concerns is no fluke. As Town explains, the point of any green design is to “bridge the gap” between aesthetics and practicality. A good example comes, somewhat incongruously, from the new car park at YVR. The site boasts a number of bioswales – essentially channels cut between parking-stall isles – which help water run off naturally. Apart from irrigating nearby flower beds and sprucing up the landscape, the design saves money. Rather than forking out on electric sprinklers, staff can simply leave gardening to the notoriously damp Vancouver climate. Clouds dump around 500mm more rain on the city each year than on either Toronto or Montreal.

The grass is always greener

Between paying for a second bag and shuffling barefoot through security, it feels like flying is more infuriating than ever. Passengers certainly think so: according to a recent survey by Morning Consult, only 41% of Americans find flying fun, and barely half consider the experience comfortable. Town is clearly aware of all this, admitting that going to the airport can be “a stressful travel experience for many”. This fact, even more than organic soundproofing and free sprinklers, probably explains why she’s so keen to make her airport bloom.

“We pride ourselves on our connection to our unique sense of place, which is the airport’s reflection of our beautiful province and its diverse cultures.”

“Green design has a very positive impact on our passengers and employees,” she explains. “It creates an enjoyable atmosphere. Green features also instil a sense of pride in our airport and our province, and this is important as YVR is the first and last impression of British Columbia for millions of people from all over the world, every year.” Given all the plaudits YVR has won over recent years, you have to suspect travellers are desperate for a bit of green in their lives. After all, the airport has been voted the best in North America for a record 10 years in a row at the Skytrax World Airport Awards – an impressive achievement considering that bonus points are given for creating a “stress-free environment”.

No wonder Town expects more airports to copy Vancouver and embrace the green revolution. “Our emphasis on art and architecture, which incorporates green elements, plays a big role in this satisfaction level,” she says. “I expect green design to become even more integral to airports.” This can only be welcomed. Thoughtful design has the potential to make terminals both environmentally friendly and welcoming to passengers, even if the old world of cherry trees and gooseberry bushes can never return.