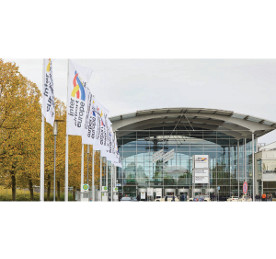 Record numbers of visitors gathered at the Munich Trade Fair Centre for inter airport Europe 2019, the international exhibition for airport equipment, technology, design and services. Nearly 15,000 people attended the event, an 8% increase on the previous edition, held in 2017, to see the latest developments and solutions for aircraft, passenger and cargo handling, security and airport IT, ground support equipment and architectural components. This iteration of inter airport Europe was also remarkably international, with 74% of the exhibitors arriving from outside Germany. Key nations exhibiting, in addition to Germany, included France, the UK, US, Italy, Netherlands, China, Spain, Sweden and Austria.

In total, the 659 exhibitors hailed from 40 different countries. The exhibition’s increased space allowed for impressive product demonstrations, both at stands and in indoor and outdoor demonstration areas. National pavilions showcased innovations from Finland, France, Germany, the UK, US and Netherlands. The 2019 event featured a seminar on digitalisation for the first time. The event was organised to offer specific focus on certain important topics on different days, with IT and daily operations the focus of the first day; topics included asset management and optimisation as well as loud and flow solutions. Wednesday homed in on development and design, and included Fraunhofer Institute IML Aviation Logistics’ presentation on sustainability in ground operations. On Thursday, the topic of discussion was IT in airside technology, while on Friday drones and unmanned vehicles were the topic of conversation.

And the winner is...

The first day also saw the presentation of five inter airport Europe Excellence Awards. The winner of the interTERMINAL category was Daifuku Airport Technologies, for its Sym3 Operator to visualise a 3D render of the Baggage Handling System. The interDATA award went to Alpha-CIM from France for ISAC, a stop bar and lead-on control system with fibre optic, while the interRAMP winner was Linde Material Handling for the Linde Safety Guard, which detects other vehicles or pedestrians before they recognise each other. The interDESIGN category was won by VRR from Netherlands, and Vanderlande – also from Netherlands – took the interFUTURE prize for the excellent BAGFLOW end-to-end baggage logistics system.

“This very successful event once more reflects the dynamic development of the airport industry, which is currently driven by trends such as the reduction of CO2 emissions, cost efficiency, enhanced passenger experience, as well as digitalisation and automation,” said Ulika Tosner, exhibition director of Mack Brooks Exhibitions, who organised the event.

“Driverless vehicles, automated baggage handling, highly developed systems and zero-emission ramp vehicles – all these latest developments were presented by the exhibitors at this year’s show,” she continued.

The next edition of inter airport Europe will take place once again at the Munich Trade Fair Centre, on 5–8 October 2021.