In July 2019, Frankfurt Airport was one of 194 hubs across Europe to sign up to the NetZero2050 agreement, pledging to become carbon-neutral within three decades. Sophie Peacock talks to Dr Wolfgang Scholze, head of environmental management at Fraport, about how Germany’s largest airport has been progressing and what further measures it needs to take to fully achieve its goal.

What does it mean to be a ‘green’ airport? At first, the term seems paradoxical: airports, after all, are gathering points for aircraft, all of which are dependent on some form of noxious kerosene to fly. As such, they are enabling agents for the diffusion of millions of tonnes of carbon emissions directly into our atmosphere. A completely ‘green’ airport, therefore, seems an impossibility in practice.

That is, unless we consider the moment at which the aviation industry finds itself. Currently, the sector is operating from a position of strength – relative to other transportation methods – when it comes to its total emissions contribution. According to the Air Transport Action Group, the industry contributed 12% of all CO2 emitted by all forms of transportation, compared with 74% of road vehicles. Those emissions are set to grow markedly in the coming decades, however, if the sector continues on its current growth pattern. By 2035, the number of passenger aircraft in the sky is expected to double. Patently, the industry has to define new emissions standards before the situation becomes unsustainable.

Fortunately, there are signs that this is happening. In June 2019, ACI Europe – the continent’s leading aviation industry body – signed up to an emissions road map that pledged to make the sector carbon-neutral within 30 years. Titled ‘NetZero2050’, the plan addresses a wide range of environmental, social and economic issues, equipping European airports with common guidelines on emission standards.

It is also much stricter than its antecedents. Now, signatories are unable to purchase offset credits to buy their way out of their emissions hole. Instead, member hubs will have to gradually replace these measures with in-sector reductions as new decarbonisation technologies enter the market.

A breath of fresh air

Based on the traffic volumes and estimated carbon footprint of the European airport sector throughout 2018, it is estimated that their adoption of the NetZero2050 targets will help them reduce their annual carbon emissions by a total of 3.46 million tonnes by the middle of this century. One of the most enthusiastic adherents has been Fraport. This, explains Dr Wolfgang Scholze, its head of environmental management, should not be surprising; after all, the German operator has been formulating its own sustainability goals since 1999.

“We later co-developed ACI Europe’s ‘Airport Carbon Accreditation’ [ACA] climate programme in 2008, thus setting international standards,” says Scholze. This climate protection initiative has since evolved into a global standard for the assessment and management of carbon emissions at airports. In recognition of its overarching sustainability efforts, Frankfurt Airport was the first airport to receive accreditation under the ACA in 2009 – a feat it repeated for the 11th consecutive time this year.

“It is Fraport’s mission to bring economic growth and sustainability into balance,” says Scholze. “Currently, we are considering options on how to meet FRA’s electricity demand with power from mostly sustainable resources, such as wind and solar energy.”

Fraport has also committed to an ambitious emissions standard. In 2019, the operator emitted an estimated 170,310t of CO2 into the atmosphere. By 2030, it aims to drag this down to 80,000t a year. “Reducing carbon emissions – with the ultimate target to become carbon-free by 2050 – is an integral part of our corporate strategy,” says Scholze. Most importantly, he adds, “we aim to achieve this climate target without resorting to compensation measures”.

This is in keeping with its existing posture on offsetting emissions. To date, Fraport has largely avoided this practice, instead implementing measures aimed at avoiding and reducing emissions in the first instance. Compensation measures are only in place for business trips among their own employees. “We intend to pursue this path as long as these measures are at hand,” says Scholze.

Fraport’s green initiatives haven’t just focused on reducing carbon emissions. The operator has also paid close attention to improving conditions for those plants and animals most affected by Frankfurt Airport. Around 54% of the 22km2 that makes up the site’s premises is deliberately left undeveloped, allowing a vibrant biosphere to form around the hub. The meadows either side of the runways have developed into a mixed habitat of nutrient-poor grassland and heather, hosting four different protected species of gorse blossom.

“It is Fraport’s mission to bring economic growth and sustainability into balance. Currently, we are considering options on how to meet FRA’s electricity demand with power from mostly sustainable resources, such as wind and solar energy.”

This commitment to protecting the local environment is also reflected in the airport’s choice of power systems for its airside vehicles. Although acquisition costs remain high for such units, Frankfurt Airport constantly reviews when and how it can incorporate electric power sources into its roster of buses and other kinds of transportation vehicles.

Like most airports, however, Frankfurt does have some way to go in boosting the sustainability of the aircraft fuel it supplies to carriers. While Fraport has gone to considerable lengths to limit its emissions in other operations, the fact remains that the literal driving force behind the growth of the aviation industry remains highly refined kerosene. As such, the operator is keen on finding a sustainable, synthetic alternative, in line with the climate protection goals defined by the German Airports Association (ADV). Fraport is also playing an active role in defining the climate strategy of the German Aviation Association (BDL). “We are committed to promoting the development of new technologies in this field at all levels,” says Scholze.

“The government should use part of the additional revenue gained from the increase in air travel tax towards the market launch of renewable fuels. If there is progress there, carbon-neutral flying will be possible in the future.”

All in this together

Part of the reason behind the establishment of the ACA was to encourage airport operators to assume collective responsibilities by following common climate goals, a collaborative effort that Fraport has been supporting and developing from the get-go.

“It is our firm belief that we can only be successful when acting together as an industry,” says Scholze. “Therefore, Fraport is in constant exchange with all airport associations at both national and European levels.”

Inter-airport exchanges are one way to lobby the sector about the importance of adhering to ambitious emissions standards. However, Scholze maintains that concrete action in this area is contingent on support from the state. “For example, the government should use part of the additional revenue gained from the increase in air travel tax towards the market launch of renewable fuels,” he says. “If there is progress there, carbon-neutral flying will be possible in the future.”

Looking to the future is surely on everyone’s minds at present; currently the greatest challenge for the entire aviation industry is the impact of the Covid-19 pandemic, which has hit airline business heavily. In April 2020, passenger numbers at Frankfurt Airport declined by about 97%, compared with April 2019. Its net profit also fell into negative territory, something that hasn’t happened since the operator’s initial public offering nearly two decades ago. As a result, airports across the Fraport group began seeing a slew of cancellations from the end of March 2020.

Unsurprisingly, the operator is “continually reassessing whether the steps now being taken to trim costs will be enough to safely pilot our enterprise though this crisis”, said Dr Stefan Schulte, Fraport’s CEO, in a recent press release. The current crisis may also put a delay on the research and implementation targets Fraport has set. While the use of synthetic fuels must be a key component in any future strategy to reduce emissions, it will take significant investment in refining infrastructure to make that a reality; investment that might not arrive for several years if the pandemic continues to dissuade passengers from flying. Even so, Fraport remains strongly committed to its climate targets.

“We are continuously working to improve the energy efficiency of our buildings and processes,” Scholze explains. “Our overarching goal remains to reliably meet people’s need for mobility, without putting an additional burden on the environment.” 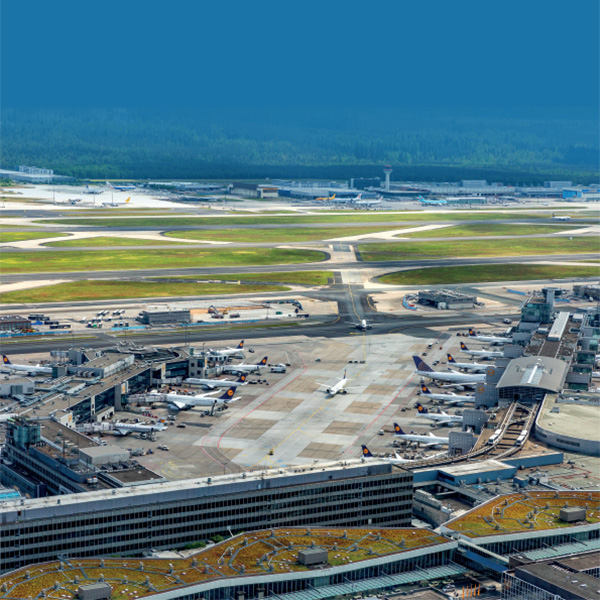 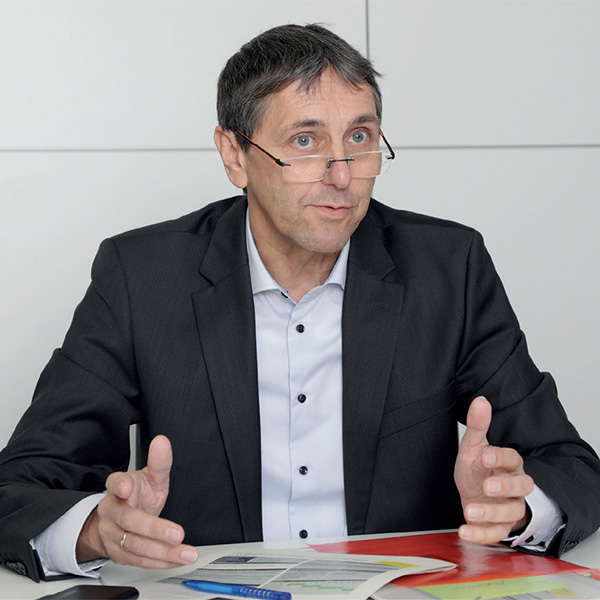 According to Fraport's head of environmental management, Dr Wolfgang Scholze, it is the company’s aim to meet people’s need for travel, without burdening the environment. 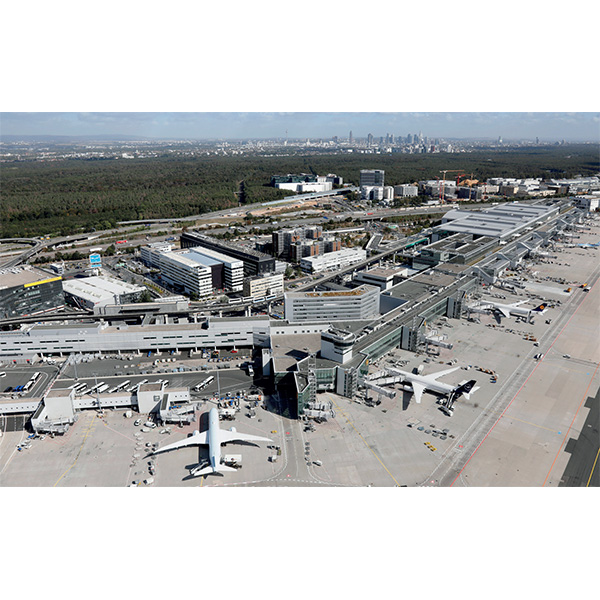 Frankfurt Airport is constantly reviewing how it can use electric power for its roster of buses and other forms of transportation.
Post to: