Seeking to compete with larger, more established operations, Scandinavian Airlines (SAS) and Norwegian have greatly expanded their long-haul routes to the US and Asia in recent years. And yet, with traffic numbers beginning to stall, how sustainable is their approach? Greg Noone talks to Philipp Goedeking, managing partner at consultancy Avinomics, and Karl Sandlund, SAS’s chief commercial officer, to see what lies ahead for both airlines.

The Reidar Viking rumbled uselessly on the tarmac while the cabin crew looked at one another in dismay. Today, 24 February 1957, was meant to be the day their airline made history. Having already established long-haul routes from Stockholm to California, with a short refuelling stop in the bucolic surroundings of Thule, Greenland, Scandinavian Airlines (SAS) was now seeking to achieve the same feat for travellers to Japan. A week before the route was officially opened, the crew of the Reidar Viking would return Prince and Princess Mikasa and 41 VIP guests to Tokyo. There was only one problem: one of the pantry ovens wasn’t switching on.

The prospect of a hot meal shortage several thousand feet in the air as the Douglas DC-7 rumbled its way over the Arctic waste was horrifying to SAS’s chief executive, Henning Throne-Holst. “It wouldn’t,” he said, “be our super-duper service.” Luckily for Prince Mikasa, an enterprising crew member took it upon themselves to venture behind the back of the pantry oven and re-insert its plug into the aircraft wall. 53,950l of fuel later and the Reidar Viking touched down at Haneda Airport to a rapturous reception.

SAS’s brief dominance of the polar routes between Europe, the US and Asia was an outlier for the airline, the horizons of which remained largely confined to plying the short routes between airports in Scandinavia and around the Baltic Sea by the dawn of the jet age. The reason for this is partly geographical. “Everyone knows that it’s very difficult to serve long-haul out of Europe, because you don’t have very much feeder traffic,” explains Philipp Goedeking, the managing partner at the consultancy Avinomics. “If you look at a flight out of Frankfurt to Hong Kong, or whatever, you have some 80% of transfer traffic on board.”

The airports SAS dominates, meanwhile, are illsuited to attract more long-haul traffic, according to Goedeking. “Stockholm is poor,” he says, while Copenhagen isn’t yet good enough. “In general, northern Europe is not a perfect market for long-haul, and without a long-haul market, it’s very difficult to develop a hub. Without a hub, it’s very difficult to develop a major airline.”

80%
The percentage of reduction in climate-affecting carbon dioxide emissions by opting to buy biofuel.
SAS

Not that SAS hasn’t tried. Over the past decade, the airline – together with its competitor, Norwegian – has pursued an aggressive long-haul strategy, inserting itself as a more affordable proposition on routes well-trodden by more established companies like British Airways. “SAS, at least, has understood that if they want to remain competitive and develop Copenhagen as a hub, they depend on long-haul traffic,” explains Goedeking. “Without long-haul traffic, you can’t develop a hub. They would be completely lost. Still on the safe side, but it’s – ... ” The analyst pauses. In German, he says, you would call it “a Flucht nach vorne, ‘escape to the front’. So, you do not step back: you try to attack”.

Such a strategy was ill-suited for one of SAS’s closest competitors, Norwegian. Starting in the early 2010s, the airline mounted an aggressive expansion of its long-haul routes, muscling in on the transatlantic market to deliver a low-cost alternative to the likes of British Airways and Virgin Atlantic.

For a while, Norwegian’s strategy of disrupting the long-haul market with a short-haul approach to pricing seemed to be working. However, strong competition and unanticipatedly high costs related to its acquisition of new aircraft dragged its balance sheet into the red. Within a year of starting transatlantic flights, Norwegian was one of many airlines affected by the battery problems of Boeing’s new 787 Dreamliners. A huge order of new 737 Max aircraft at the end of the decade, intended to upgrade the carrier’s wider fleet, ended up costing it dearly when national air authorities grounded the model after two crashes in Ethiopia and Indonesia, and blamed it on its flight navigation system.

“We’re constantly developing our offering in line with what our passengers ask for. By opening a year-round route to Los Angeles from Copenhagen, we are increasing availability and enabling growth.”
Karl Sandlund

Facing the prospect of the airline unable to sustain winter operations if it didn’t deliver on major cutbacks on routes and aircraft, founder Bjørn Kjos resigned as CEO in July 2019. His successor, Norwegian’s former finance chief, Geir Karlsen, arranged a fire sale of the airline’s key assets and reached out for new funding from investors, while announcing a 10% cut in capacity by 2020.

One of the direct beneficiaries of the Norwegian retreat has been SAS, with the carrier having one less competitor on routes out of Copenhagen and Stockholm to the US and Thailand. The Swedish-based airline’s more conservative business mode could also help them when it comes to the long-haul market, according to Goedeking, provided it doesn’t teeter into over-capacity on said routes. “It’s not a classical carrier because of their multinational situation,” he explains, referring to its Scandinavian remit. “They have to serve Copenhagen, they have to serve Stockholm, it’s a carrier that is focusing on transfer traffic, serving a nation, serving the world. Connecting the world.”

As such, Goedeking considers the airline to be operating from a much stronger position than Norwegian ever did, the business strategy of which the analyst considers to be flawed. “I would call it confused,” he says. “They tried to be a long-haul carrier, a low-cost short-haul carrier, a touristic carrier. They experimented with low-cost, long-haul. They experimented with Argentina. There’s way too much experimentation in the various models they tried to be. They try to be each animal in the zoo at the same time and that simply won’t work.”

While Goedeking considers Norwegian’s current financial restructuring effort to be enough to sustain the airline through the current winter period and into the summer, he thinks the airline would profit much more from a conservative routes strategy. “They need to use that extra time to restructure their strategic positioning,” he says. “The risk is very high to burn a lot of money without repositioning the airline. What matters [in becoming] sustainably profitable, is to focus the strategy.”

This is not to say that SAS has been invulnerable to external shocks. In 2019, the carrier experienced a 60% drop in revenue, a slowdown that its CEO Rickard Gustafson blamed on “higher jet-fuel costs, unfavourable currency movements and a strike.” The last incident in May, when SAS pilots walked out in a protest over salaries and working conditions, cost the airline $52 million. Its pre-tax profits, by comparison, were just $84 million.

The carrier’s chief commercial officer, Karl Sandlund, concedes that 2019 was a “challenging year.” Nevertheless, he says, “we are pleased with the strong performance across our operations” in its final months and that its “product offering, combined with our determined efforts towards more sustainable air travel, continues to attract more customers to fly with us.”

Crucially, these developments have not changed SAS’s general attitude towards route expansion, having added 14 new European destinations this year and more long-haul routes out of its Copenhagen hub.

“We’re constantly developing our offering in line with what our passengers ask for,” says Sandlund. “By opening a year-round route to Los Angeles from Copenhagen, we are increasing availability and enabling growth. The timetable is attractive and thanks to the economies of scale we can achieve in fully utilising our fleet, we are in a position to provide a daily service from [the hub]”.

Nordic airlines have also been singled out for their vulnerability to the flight-shaming movement, a home-grown campaign among environmentalists like Greta Thunberg against casual short-haul bookings. An increase in rail bookings to European destinations has been reported among Scandinavian travellers, with IATA’s director general announcing in November that the body will launch a sizeable marketing campaign “to explain what we have done, what we are doing and what we intend to do in the future” when it comes to sustainability.

Even so, not everyone is convinced that airlines like SAS or Norwegian are destined to see their profits affected by this campaign. While some of the airline CEOs Goedeking has spoken to are concerned by the flight-shaming movement, “no-one told me that they’ve measured any impact of the shaming” in booking data.

Sandlund, unsurprisingly, is proud of SAS’s existing record on sustainability. “We are working constantly to secure less impact on the climate,” he says, whether that’s in the form of new aircraft with lower fuel consumption, increasing investment in biofuel alternatives to conventional jet propellants, or offering a CO2 compensation scheme. Additionally, “anyone flying with SAS can opt to buy biofuel, which reduces climate-affecting carbon dioxide emissions by up to 80%. We are also supporting the development of electric aircraft in different projects – for example with Airbus.”

$52 million
An estimated amount lost when SAS pilots walked out in protest over salaries and working conditions. In comparison, the pre-tax profits were $84 million.
Reuters

Whether SAS’s strategy on diversifying their fleet and routes will work in the medium to long term remains to be seen. The long-haul routes market remains highly competitive, and flights from Scandinavia straight to the US and Asia is a proposition that analysts like Goedeking find unconvincing compared with more established routes from Finland or Western Europe. However, insurgent airlines might be able to carve out a space for themselves in this area if they remain savvy about the aircraft they send to those destinations.

“What we observe is that the European airlines on long haul correctly choose rather small aircraft within the long-haul, wide-bodied family,” explains Goedeking. In November, SAS announced that it was rolling out a new set of transatlantic routes using the nimble Airbus A321R aircraft, imitating similar expansions by Portuguese carrier TAP and JetBlue. Whether that’ll be enough to guarantee its maturation from a regional carrier to a major international airline remains to be seen. 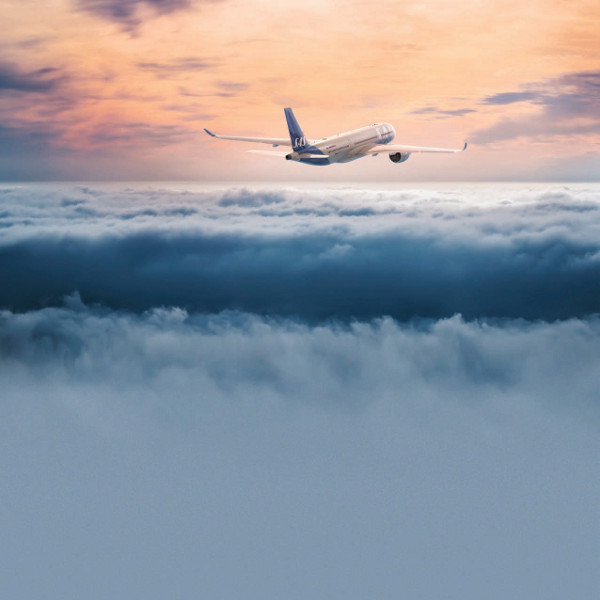