As careful attention is focused on improving passenger flow, many airports are turning to highly refined and cutting-edge technology to monitor and manage movement, and so improve service and efficiency. Grace Allen speaks to Richard Curran, professor of air transport and operations at Delft University of Technology, about the creative thinking shaping the future of operations.

It is no secret that increasing passenger numbers, while a boon to the aviation industry, poses a significant challenge to airports where footprint and infrastructure may be limited. The rise in air travel, already evident, sees no sign of abating; in 2018, IATA predicted that passenger numbers would double by 2037 to 8.2 billion.

Beyond this, the role of the airport itself in society is changing, with new facilities transforming what was once a liminal point of transit into a destination with functions far beyond travel.

“You have more forward-looking visions of airports developing further into the airport city, or aerotropolis, where airports, especially the bigger ones, are seen to be almost social cities in their own right, not just transport nodes,” comments Richard Curran, professor of air transport and operations at Delft University of Technology.

“With a lot of these other innovations, including conference centres and health outlets, there is a changing role and perception of what an airport is,” he adds.

Even beyond air passengers, the number of people visiting airports is on the rise. The establishment of new facilities like Changi Airport’s Jewel, a complex of restaurants and shops in a tropical, plant-filled dome, look set to further attract non-flying visitors.

With this in mind, measuring and analysing passenger flow becomes ever more important. The ability to understand how people are moving allows for the identification of elements such as waiting times, process throughput and area occupancy, and then the use of this information to conduct operations as smoothly as possible. The means methods used to gain the data can vary, from identifying Bluetooth or Wi-Fi signals from mobile phones to the use of technology such as cameras or thermal or infrared sensors to record passengers passing a certain point.

“You have more forward-looking visions of airports developing further into the airport city, or aerotropolis, where airports, especially the bigger ones, are seen to be almost social cities in their own right, not just transport nodes.”

Awareness of how long a security queue is, or how many people are in the check-in area, allows for the identification of bottlenecks or peaks and troughs in demand as well as the real-time provision of information; passengers can be informed how long waiting times might be, reducing journey stress and improving movement as they are more likely to arrive at checkpoints on time. This can be vital when approaching capacity.

This move to keep passengers informed can apply to flow even beyond the airport.

“You have these elements of checking in at home, maybe also even estimating times of arrival at the airport, and potentially being given advice on the route you need to take to reduce congestion and minimise time or fuel emissions, and what the precise times are – perhaps even where to be at a certain point of time given the gate you are going to, and relative to information about the levels of congestion or busyness in the airport itself,” suggests Curran.

This is under way at Auckland Airport, where technology such as Wi-Fi and radar was implemented to measure traffic flows between the city centre and airport. As well as allowing for improvements in the road system to the airport, the traffic data is available to travellers, providing information on travel times and congestion.

In addition, as the 2015 Airports Council International paper ‘Best practice on automated passenger flow measurement’ – a response to the number of airports adopting technology to this end – points out, obtaining passenger flow data also allows post and preoperational use; employing passenger flow data to review processes and also as a tool to forecast future trends in flow, identify patterns and make better use of resources, whether that be space, personnel or equipment. This is of value when real time isn’t fast enough.

“For an airport operator, it could take 15 minutes to respond to a peak in demand in real time, and that can be incredibly frustrating for a passenger,” Curran says. “That could be better anticipated if you are tracking the overall flow and migration of people through the airport, and then using, for example, some clever algorithms, machine learning or artificial intelligence to support the decision-makers in running the airport, and allocating resources to try and maintain a high level of overall performance relative to the demand.”

This has been a priority at Abu Dhabi Airport, where the installation of over 450 sensors, as well as the use of an accompanying application in 2018, has allowed the airport to forecast ‘desk demand’. Abdul Majeed Al Khoori, acting CEO of Abu Dhabi Airports, described the project as instrumental in the airport’s efforts to balance efficiency with increased passenger volume.

The research done by Curran’s team with Dr Alexei Sharpanskykh, also of Delft University of Technology, building intelligent simulation models, demonstrates the potential that analysing passenger flow has for all aspects of operations, from design to the number and role of staff. Using a pioneering technique called agent-based modelling – a type of sociotechnical modelling – the process codes virtual ‘passengers’ with potential behaviours and therefore choices when faced with certain situations, such as an airport security checkpoint. Logic is codified within such a simulation as to potential outcomes, whether from humans or the technical systems they are operating with, as part of the over complex system they are within.

“You can build the sort of intelligent stochastic simulations that are not necessarily deterministic, but try to explore the potential behaviour of passengers given a particular layout or design,” Curran explains. “But you can also, of course, introduce different levels of security, different amounts of security personnel – some personnel are active, other ones are observers, for instance – and we can then look at how to best advise the designers on the layout relative to levels of security risk analysis, but also relative to the flows and the ability to get the number of people through a given facility with a certain amount of personnel; and also relative to the estimated threat from an attacker.”

The combination of various passenger behaviours and the probability of these behaviours with a situation like a new security area allows the exploration of patterns of flow that might not be immediately obvious.

“You can predict, or at least estimate, emergent behaviour that you might not have expected,” Curran says. “And then we can do that within the context of a particular airport design or facility within the airport, given different demands of passengers, types of passengers and airport employees.”

A shift in demographics

This research can also help airports prepare for shifts in passenger demographics. Ageing populations and the increased use of air travel are resulting in a rise in the number of older people travelling through airports.

“Older people have a different level of mobility and behaviour, for example,” Curran says. “Typically, you might model that mobility with half the speed and then look at how that influences, first of all, the movement of people through the airport, but also maybe relative to say, an initiative such as slow security lanes and fast security lanes, which are more oriented towards business people relative to older passengers.”

Looking to the future, Curran sees the possibility of passenger flow being monitored and managed with the increased interaction of the passenger themselves.

8.2 billion
Predicted passenger numbers by 2037 – double what it is at present.
IATA

“One of the things that we would envisage is somebody could already be in contact with the airport using an app in terms of their estimated arrival time at the door,” he posits. “All of the information is there about the flight that they need to get and what gate they are going to, they could already be giving and given information about their baggage requirements and security status, or possibly even categorising themselves as family travel or business travel, and maybe age group.”

This refinement of information could allow a management of passenger flow that takes into account the identity and preferences of individual, real passengers – how long it might take them to walk from one area to another, what facilities they would wish to use – and use this to manage operations as well as to feed back to the passenger, updating them on the time they should allow to travel between terminals or the location of a particular shop, food outlet or restroom.

“For an airport operator, it could take 15 minutes to respond to a peak in demand in real time, and that can be incredibly frustrating for a passenger. That could be better anticipated if you’re tracking the overall flow and migration of people through the airport.”

“What we need to do is to play, act and work smarter, using the technology, and such decisionmaking simulation models and tools, to get more out of the same amount of infrastructure and technology to be able to deal with increased capacity demands and future societal needs,” Curran says.

As numbers continue to grow, there is no doubt that the management of passenger flow will be a major part of this effort. 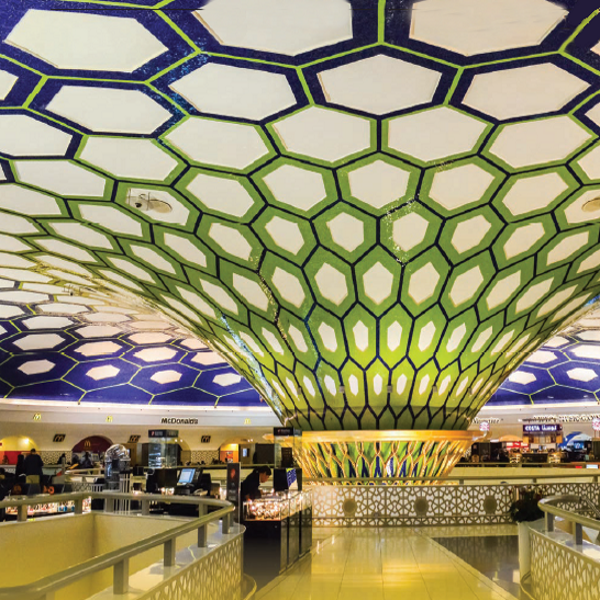 Inside the terminal at Abu Dhabi International Airport, the main hub for Etihad Airways. 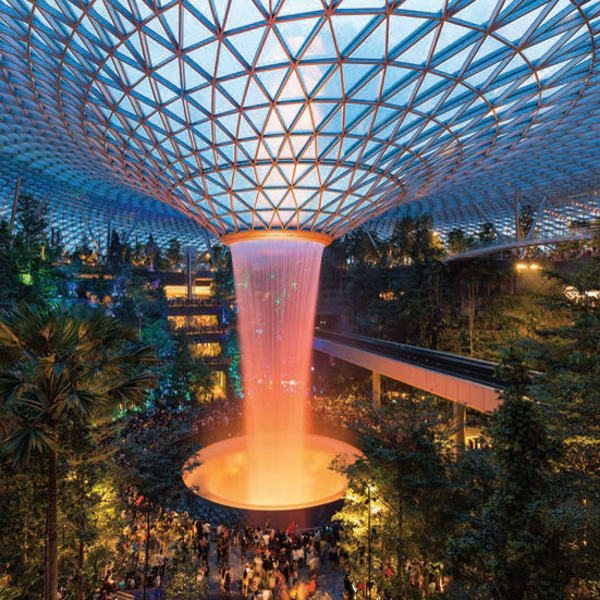 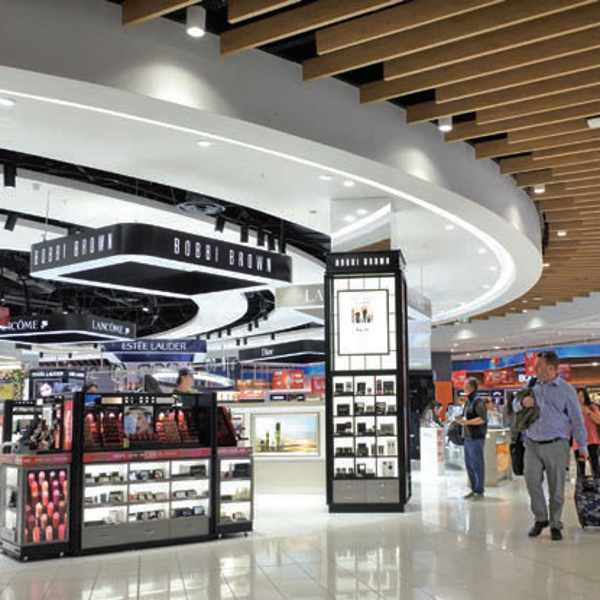 Passengers passing through the new duty-free area at Auckland Airport international departures. More then 10 million use Auckland’s international terminal every year.
Post to: