Central to the safety of airport operations are the surface friction characteristics of the runway, and in an ideal world the accurate measurement of pavement conditions that are affected by surface contaminants would be standardised around the globe. Mark Brierley investigates the ICAO’s attempts to achieve this goal.

Many of us have been through the hair-raising experience of landing at an airport during adverse weather. The shudder, bounce and weave of the aircraft as it slows to a trundle and pulls off the runway towards the terminal is something only the most seasoned traveller is able to ignore. But it needn't make anyone clutch their armrest, as runway surface conditions are constantly checked to ensure the contaminants present will not adversely affect the safe operation of flights.

These contaminants - be they snow, ice, slush or, as is most often the case in the Asia-Pacific region, heavy rain - all impact the friction characteristics of the runway pavement. Understanding which aircraft can operate on which surfaces in which conditions is crucial in minimising the impact adverse weather has on civil aviation. With these characteristics varying around the world and even from one end of a runway to the other, the task of accurately measuring such variables is by no means a straightforward one.

It is the job of the International Civil Aviation Organization (ICAO) to try to harmonise the many disparate approaches to the assessment, measurement and reporting of runway pavement friction characteristics. To achieve this, it set up the Friction Task Force in 2008, which has members from eight countries and five international organisations. The efforts of the task force have led to the publication of Safety Circular 329 last year, which addressed five key areas of runway friction testing:

"Be they snow, ice, slush or heavy rain, these contaminants all impact the friction characteristics of the runway pavement."

At its most basic, the friction characteristics take into account the pavement surface (runway), the aircraft tyre, the contaminants between the tyre and pavement, and the atmosphere affecting the state of the contaminant, such as temperature. However, the depth of analysis goes much further than this, covering a myriad factors relating to each of these. For example, runway texture, construction material, drainage, maintenance and grooving are all considered. With respect to the aircraft, wheels, brakes, anti-skid systems, testing and certification are considered. The role of human action is also central to the research. For example, regular rubber removal will return the friction characteristics of the runway back to, or at least close to, their original performance. Using water blasting, chemical removal, shot blasting or mechanical means, the rubber deposits can be removed, but each of these is effective to a different extent.

By taking into account such wide-ranging factors, the ICAO has been able to develop a list of recommendations that will be disseminated across the globe in order to harmonise the practice of assessing runway surface conditions. The ultimate aim, of course, is to reduce the possibility of runway excursions, which between 2006 and 2012 accounted for 7% of all minor accidents and 19% of all serious incidents globally. The list will also help improve runway safety overall, which is responsible for nearly 60% of accidents involving scheduled commercial traffic.

"Between 2006 and 2012, runway excursions accounted for 7% of all minor accidents and 19% of all serious incidents globally."

But the publication of Circular 329 is not the end of the story. This is just the latest research by the ICAO in the field, which began nearly 60 years ago with the release of Circular 'Ice and Snow on Runways' in 1955. The organisation is also keeping a close eye on similar studies currently being undertaken in the US and Europe. The Federal Aviation Administration's (FAA's) Takeoff/Landing Performance Assessment and the European Aviation Safety Agency's (EASA's) Runway Friction Characteristics Measurement and Aircraft Braking both have the same aim of standardising runway friction testing. Their work could shed new light on the challenges in this field, and give cause for the ICAO SNOWTAM standard, first published in the 1960s, to be overhauled.

The SNOWTAM system never gained the global adoption needed to fully standardise runway surface condition testing, with different countries implementing its recommendations to varying degrees. It is hoped the work currently being undertaken by the Friction Task Force will one day replace this system globally, so that wherever you find yourself landing in adverse weather, the assessments carried out to ensure the safety of the runway will have been the same. No need to clench the armrest then. 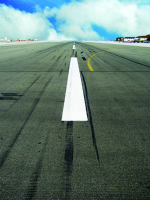 The ICAO has developed a list of recommendations designed to harmonise the practice of assessing runway surface conditions across the globe.
Post to: