Asia’s approach to the passenger experience

At first sight, IATA’s Fast Travel initiative does not appear to be taking off as quickly with Asian carriers and airports as it is in Europe and North America, but head of passenger experience Paul Behan explains to Nigel Ash that Asia has a subtly different approach to the scheme.

Air China at Beijing Capital International Airport has achieved gold status with IATA for implementing its full suite of Fast Travel solutions. By 2013, IATA is aiming to have at least 100 airlines and airports offering at least three of its six Fast Travel items, which include check-in, document scanning, flight re-booking, self-boarding and baggage recovery.

Using the self-service principles that made a tentative first appearance in the 1990s, Fast Travel establishes a dynamic process whereby the passengers themselves manage baggage processing and document checks. In time, it will produce radical changes to check-in halls and should boost passenger flows.

Progress towards self-service in Asia

Air China and Beijing are, however, the only Asian carrier and airport to gain this status. Etihad Airways received the accolade for its operations at Abu Dhabi International, Air New Zealand did the same at Auckland, and the line-up of European recipients includes BA at London Gatwick, Iberia at Madrid-Barajas, Lufthansa at both Munich and Frankfurt, and SAS at Copenhagen.

For those passengers who have found themselves moving through the likes of Singapore Changi, Kuala Lumpur and Hong Kong airports with a smile on their faces, this lone Asian recognition of Fast Travel excellence may seem puzzling.

"People in Europe are willing to go through the hard work of learning new technology, whereas in Asia it has got to be right first time."

Paul Behan, head of passenger experience at IATA, explains: "It is not a case of Asian airports being reluctant to embrace Fast Travel. It is more to do with progression along certain self-service routes that some regions seem to pursue, favouring one project over another. Self-tagging, for instance, is seen as something not necessarily less desirable, but not key in the minds of passengers."

Behan points out that, so far, Beijing Capital International is unique in Asia in introducing all-round 'Bags ready-to-go'. "This is primarily around the self-tagging of bags by passengers," he explains.

Behan ascribes the differences in part to demographics: "A lot of the flights around Asia tend to be long haul and people tend to have one or two bags. Therefore they will have a very high-speed process at the desk, whereas if you look at Europe, where self-tagging is probably more mature, there is a pretty healthy split between short-haul international, where people will take a bag on board, and long haul, where they will have hold luggage."

Behan also points out that Asian airports still have higher numbers of staff helping passengers go through all the various processes than is now the case in Europe and North America. Nor does he think that the slower take-up of the Fast Travel programme has been because Asian passengers have lower expectations.

"New developments used to take up to two years to spread from the first airport to the rest. That cycle has probably now got nearer to six months."

"I had this discussion with Cathay Pacific not so very long ago about why there seemed to be a general reluctance in Asia [on Fast Travel], whereas in Europe or North America, things move at a much faster pace," he says. "It doesn't fit with the overall context of Asia, certainly if you look at Japan or Singapore, which are very progressive in technology generally. And he said: 'You know, you get people in Europe who are willing in our view to put up with stuff, go through the hard work of learning new technology, perfecting it, and getting it right; whereas in Asia it has got to be right first time, every time. That's why there might be reluctance in the actual implementation. Once we do it, it will be spot-on.'

"I wasn't sure that I bought it," continues Behan, "and then I went to Hong Kong last year, where they had self-service kiosks, and there were people standing by doing check-in on their mobile phones. So I think he had something there."

Behan expects that, when a few more Asian airports take up Fast Travel, it will not be long before all of them will have embraced the principles and the technology. "A decade ago, you used to see new developments taking up to two years to spread from the first airport to the rest. That cycle, I would say, has probably now got nearer to six months. Any airport that has a lead will not enjoy that luxury for long."

As an example, he cites the way in which Asian airports now do customer service and experience better than European counterparts and how Europe is now learning from Asia.

"Asians tend to look at the whole retail offer in the round. Anything that makes a passenger happier will give a better experience all the way through."

"You have a lot of airports in Europe putting a great deal of effort behind retailing," he notes. "What you can see in Asia is the same, but from a slightly different perspective. The Asians tend to look at the whole retail offer in the round, rather than as a piece of processing, or a piece of shopping. Anything that makes a passenger happier and more comfortable will give a better experience all the way through."

The challenge for all airports and carriers, not simply in Asia, remains security. Manila is not alone in having up to eight separate passport examinations between check-in and the gate. Explains Behan: "There are a number of regulators that still focus on the very old way of doing things, very manually based processes, which do very little for security and even less for the passenger experience."

Checkpoint of the Future

"What we are trying to do with our Checkpoint of the Future project is to look at the security in the round, identify the threat and the level of risk associated. Thereafter, security screening can be tailored to where risk demands perhaps a slightly closer look."

Behan warns that with the present, one-size-fits-all, incremental layer upon layer of regulation, something has to give.

"The authorities realise that a blunt tool does not meet their needs of dealing with the security threat, which itself is becoming more sophisticated."

"Either the building will not be able to accommodate it and you'll get long queues," he says, "or the cost of introducing more and more lanes is just extortionate in terms of cost per passenger. And the authorities do realise that a blunt tool does not necessarily meet their needs of dealing in a sophisticated manner with the threat, which itself is becoming more sophisticated."

Getting Fast Travel right in the face of the projected 5.8% annual increase in air journeys is something of a no-brainer. However, Behan points out that the growth figures include existing frequent flyers, whom IATA deem to make at least six flights a year. The projection is that these passengers will be increasing their travel to nearer 16 flights a year.

"Now, on balance, with half a dozen flights annually, the frequent flyer will put up with processing delays that might total, say, four hours in the year," says Behan. "However, with increased air usage, inefficiencies are going to boost passenger dissatisfaction and frustration. In some markets, they are going to look for alternatives, such as high-speed rail services." 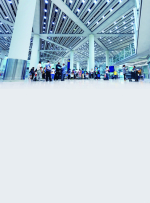