Airports can provide a traveller with their first impression of the city and culture they are visiting, but all too often fail to convey a sense of identity cohesive with their location. With London City Airport’s £480 million expansion and regeneration project well under way, Tim Gunn talks to director Neil Dillon and designer Kevin Patience about how the city’s most central terminal plans to make the most of its position.

The word is out. Shipping containers don’t have to be shipped. They’ve been converted into enough houses, hotels, offices and malls in London to prove the functionality of immobilised steel boxes to even the most intransigent merchant seaman. Truly, every cargo port in the world is just a sprinkle of imagination away from becoming a retail park. And while the city’s freight developments are relatively small-scale, East London in particular has been a world leader in experimenting with recycled buildings since the early 2000s, mere decades after containerisation had left the area’s docks derelict and its population in free fall.

That means there is a lot to parse about London City Airport (LCY)’s new terminal building – the world’s biggest, goldest shipping container. To clarify, there is now a runway poised on King George V Dock because it couldn’t accommodate the container ships that began to dominate international trade in the 1950s. In fact, no 40ft intermodal receptacle ever made landfall in London, leaving a gaping void in the once vibrant East End. LCY was built in the 1980s as part of the plan to fill it. With the Thatcher government pushing to create a European rival to New York’s financial dominance, the airport was designed to provide business travellers with easy access to the new hub at Canary Wharf and its hoary old relative in the City of London.

So, the ships left London to carry containers, London’s shipyards were converted, and the containers left the ships to stay in London. Thus is culture. Steel boxes are both a symbol of the East End’s decline as a diverse and industrial maritime society and its resurgence as a diverse and ‘industrial-chic’ service one. By the time it is completed in 2022, the redeveloped LCY will present an impossible alternate vision of the city as an international centre of trade rather than finance. It will be a monument to defeat and victory, opulently winking at the area’s darker days and tipping its golden hat to deindustrialisation.

Whatever people take from that, it is clear the airport authority is thinking about more than business trips. The £480 million, 51,000m2 development programme will enable it to handle an extra two million passengers per year, which doesn’t quite tally with employment projections for local financial institutions post-Brexit. Last summer, in fact, LCY had more leisure than business travellers, and half of the 4.8 million passengers it served over the whole year were flying for reasons other than work. Incidentally, the original 17,000m2 terminal was only designed to handle a fifth of that total.

“We had quite a dated identity from before,” says Neil Dillon, LCY’s marketing director, who also oversaw the airport’s rebrand in March. “It was all about ‘Get closer’, which is actually less than a brand – it was more a functional statement about our position in central London.”

The heart of the matter

By contrast, the new logo creates a plus sign by intersecting a horizontal ‘LON’ with a vertical ‘DON’, and places a heart in the centre of the two syllables’ shared vowel.

“It’s representative of the fact that we are in the heart of London, in the heart of great historic, cultural and artistic diversity, and we are at the heart of trying to redefine the airport experience with this whole regeneration project,” Dillon explains. “We want people to come here not only because of its simplicity and proximity, but also because we embody a proper London experience.”

For him, that too is enlivened by variations on the heart metaphor; East London is the city’s ‘creative heartbeat’ and the Thames its ‘artery’.

“The river is probably the single most influential element in our history,” he continues. “Bringing the shipping up to the docks for trade made the city flourish. Obviously it’s a given that this airport stands apart from others due to the proximity to Central London, and the speed and convenience that we offer. But, intrinsically, there is also already a closer cultural connection and history with London than any other airport because of our position as a former shipping dock.

“It is why the river is a central theme to the redesign. We have tried to keep that sense of history and the theme of our heritage moving forward into the future.”

It’s also why Kevin Patience, design director for the terminal’s interior, began the project with a 20km riverside stroll west from the airport to Vauxhall.

“It was quite rich pickings for conceptual ideas along the way,” he recalls. “Connectivity is obviously something that a lot of airports talk about, and the fact that the river has always connected people with the city was a nice thread, especially as the airport is effectively built out of the river itself.”

A number of touches stemming from observations made on that walk emphasise the connection between the airport and the river. For one, the colours of London’s many bridges created a themed palette of accent colours for the interior’s predominantly black, white and timber scheme.

It goes deeper than accent touches, however. Patience is an evangelist for the Thames clipper riverboat service as well as an avid walker, and the contented lapping of water at bow or bank is an apt way to figure his belief in the ability of good design to ‘soften’ the airport experience for passengers. His team at The Design Solution (TDS) wanted to counter the terminal’s pointedly industrial envelope with an interior that introduces ‘warmer’ materials, and more fluid, curving lines to the interior surfaces and visual cues.

“It always feels slightly harsh to me the way that architects refer to processing people rather than allowing them to find their way,” says Patience. “The emphasis on function doesn’t make airports a conducive environment to easing the stresses of travelling by plane.”

Then again, rivers aren’t corridors. As any aerial shot of London will show, they wend, meander and double back according to a far longer process than either customs or security. Moreover, any effort to exemplify a city within an airport is made difficult by the inconsistent way they are populated, with long empty concourses feeding into often cruelly stuffed gate rooms and security queues. Individual cities don’t have uniquely characterful ways to make aircraft fit next to each other, and the efficiency considerations of international air travel are resistant to local culture.

“It’s a real problem with airport environments that inevitably you are going to end up with these hugely long corridor experiences,” concedes Patience. “Typically, designers create lines that follow the direction of travel for wayfinding, but it’s so blindingly obvious that we tried not to do that.”

For departures, TDS plans to emphasise the gate spaces with disruptive ceiling rafts instead of coating the whole surface with pressed metal, and will use a range of large-format graphics about contemporary London in order to create a more natural and engaging visual pace. On the arrivals side, Patience and his team were helped by the fact the building’s architects wanted to do more than give incoming travellers a view back onto the apron after disembarking.

“The corridor is on the same level as the dock outside, so another nice connection with the river is that as you arrive you have got all these lovely views out onto the water,” he enthuses. “It’s going to give quite an interesting arrivals experience that will hopefully distract people from the fact that they are in a massively long corridor.”

Not that the Thames was the only design inspiration. In Patience’s terms, it was the strongest of three overall ‘concept-themes’ proposed by TDS, all of which impacted the eventual design. The second most popular idea was to style the airport as an ambassador for creative London, showcasing the city’s greatest fashion, architecture, music, theatre and more. Patience points to more varied and story-driven gate spaces as one element of what Dillon calls LCY’s plan to be “a mirror to what is happening within the city itself”.

Similarly, everything from the terminal’s art installations and graphic wall panels to its light fixtures and furniture will be designed by local talent. Both Dillon and Patience are excited about using Tom Dixon pendant lights at the main entrance from the DLR to create, in the latter’s words, “a hotel lobby feel”.

“It is purely decorative,” he continues, “and you could say it’s frivolity, but I think that’s what airports actually need.”

In fact, it is supported with ‘a bit of unexpected quirkiness’ in the form of a neon hall of fame of London musicians along the route from the DLR to check-in.

“You would definitely more expect that in a contemporary hotel than in an airport,” Patience explains. “It’s just a nod to the city that is there to make you smile. It’s that sort of personality that gives the place locality.”

Despite the personality and attention to detail, TDS’s reimagining of the airport as a boutique London hotel was the least well received of the original concept themes.

“They liked a lot of the values,” says Patience, “but they didn’t like the idea of being boutique because it gives that impression of small scale, while obviously City is striving to become a bigger fish with this expansion.”

It is a tension TDS knows well from its work with smaller airports across the world.

“They want to feel like an international airport experience, which is everything we are trying to stop,” he laughs. “But there is a balance to be struck with an international space that is familiar to travellers and a softer touch layered on top. If you completely ignored the recognisable airport environment it would be such an alien experience that i’m not sure how passengers would react.”

Still, LCY currently serves less than one third as many passengers as Luton, London’s next smallest airport, and the central location greatly limits the size of aircraft that can land there. For Dillon, the redevelopment isn’t about playing larger airports at their own game. As he sees it, one of the best things about the airport is the fact that it isn’t too ‘corporate’.

“We offer quite a friendly, personal level of service,” he says. “That’s something that our passengers love, and it has got a lot to do with the East End spirit of the staff.”

Around 65% of LCY’s employees live within a five-mile radius, which is why Dillon believes it can offer “an authentic sense of London”.

“There are some real characters here, and they all love customer service, so we’re really quite lucky,” he continues. “But that doesn’t come from nothing. It comes from the fact that even the guys in airfield ops spend their day looking at the most amazing London skyline, driving up and down the Thames.” 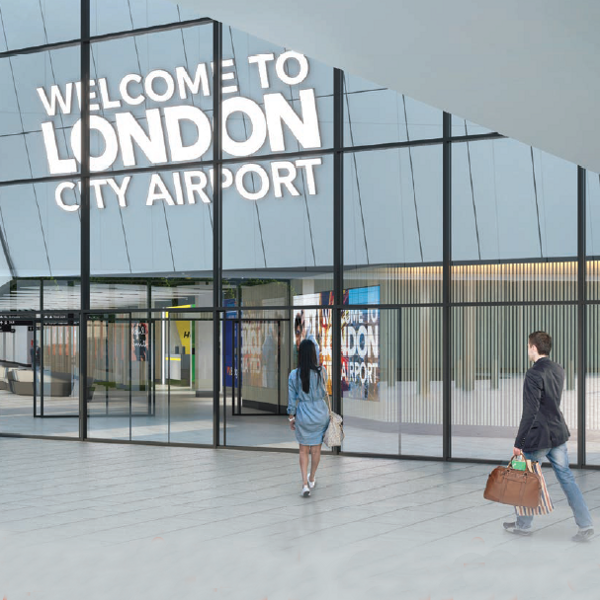 the new entrance to the terminal at London City Airport. 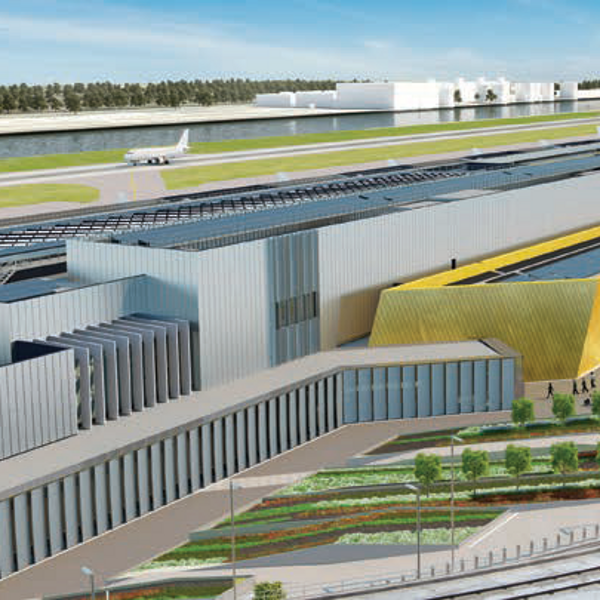 Projected view of London City Airport in 2022.
Post to: