Martin Eurnekian, scion of an Argentinian business dynasty and CEO of Corporación América Airports, has recently taken on the mantle of chair of the Airports Council International (ACI) World governing board. In an exclusive interview, Eurnekian talks with Grace Allen about the challenges of meeting global demand for air travel at a time of critical importance for the industry, the value of collaboration to overcome disruption, and the role of the ACI in encouraging unity and providing leadership.

The appointment of Martin Eurnekian as chair of Airports Council International (ACI) World’s governing board at the end of 2018 seems like an obvious progression. Eurnekian, who steps up from a position as president of the ACI Latin America-Caribbean region, is immersed in the challenges and developments of the airport industry, with past experience that ranges from the management of airlines and direction of terminal design to concession management.

He is CEO of Corporación América Airports, the airport operator first established in Argentina by his uncle, the billionaire businessman Eduardo Eurnekian, in 1998; today, the company runs 52 airports across the world, and as CEO, Martin Eurnekian took it public on the New York Stock Exchange in early 2018.

“As with any trade union, ACI works most importantly through its membership. ACI has, over the past 20 years, really settled to become the one place where airports meet to work towards having a unified voice, and having a common place to share knowledge and promote excellence.”

I ask if his new role on the world governing board is a natural step in the course of such a career. It is clear, though, that Eurnekian sees it in completely different terms – collectively rather than personally significant, and a satisfying marker on a path that has much further to run. It becomes obvious, as we talk, that the future is something he thinks about a lot.

“It is a well-deserved recognition, not for me, but for the region of ACI that I have worked in for the past few years, which is the Latin America-Caribbean region,” he says.

Eurnekian is the first from this region to be appointed chair and points to the professionalisation of the area, achieved at a time of substantial change.

“It is a region that has seen tremendous growth – and that also has a lot of challenges,” he says. “I think the region is taking on those challenges, on capacity, security and diversity.”

The Latin America-Caribbean area saw growth rates in passenger numbers of 4% in 2017, a return to the trend seen since 2010 after a dip in 2016. At the ACI Latin America-Caribbean Annual Assembly and Conference held in Miami at the end of 2018, ACI World director Angela Gittens called upon the industry to face up to growth, and make sure that social and economic benefits continued to be felt by communities. The figures prompted ACI to encourage the industry to respond by enabling sustainable growth. Aviation currently provides 7.2 million jobs and $156 billion in economic value to the region.

The challenges faced by the Latin America-Caribbean region, a large and diverse area seeking to manage security concerns and environmental impact alongside rapid growth – which also puts pressure on capacity and passenger experience – are, in their essentials, also those faced by aviation across the world. It is in this context that Eurnekian believes that ACI has a vital part to play.

“As with any trade union, ACI works most importantly through its membership,” he says. “ACI has, over the past 20 years, really settled to become the one place where airports meet to work towards having a unified voice, and having a common place to share knowledge and promote excellence – and I think ACI has done that very successfully.”

One area in which airports are hugely benefitted by speaking with a single voice is in the creation of policy. In particular, Eurnekian points to the close relationship ACI has cultivated with ICAO, ensuring that airports’ interests are heard as the UN specialised agency develops global policy.

“ACI has a very active role in promoting excellence and putting the word of our personal view of airports on the table at that important venue,” he says.

Eurnekian highlights ACI’s work on the recent amendment to ICAO Annex 14, which allowed a reduction in minimum requirements for airfield features such as runway width, taxiway width and runway to taxiway separation. The change means that a number of airports will be able to accommodate larger aircraft, like the Airbus 380 and the Boeing 747. “These kinds of examples are really what ACI is all about,” he declares.

A point Eurnekian is emphatic on is that ACI has to be an authoritative voice on the future of the industry.

“For any trade union, the most important thing is not to look into what’s going on today, but create the common view on where the industry’s going,” he states.

“I think the digital revolution is a challenge that is now on the table, and that all airports and ACI have to work towards taking advantage of what is going on in the world, technology-wise, to really be able to implement it in an industry that is highly regulated.”

The industry’s future expansion is, perhaps, the most pressing issue – ACI predicts a 4.1% annual increase in passenger traffic globally to 2040.

“There are a few things that have consensus among the industry, in others there are not, but there is one clear consensus – that is this industry is set for growth, and important growth,” Eurnekian says. “So the challenges that growth will bring are probably big key priorities of the organisation in terms of making that growth as painless as possible, and as sustainable as possible, and as in line with the stakeholders in the communities where airports are as possible.”

It is clear to Eurnekian that as aviation continues to expand, the need for a unified body to represent airports is amplified, and that ever more cohesion is required.

“I think ACI already has a very big and important role,” he says. “But as aviation grows and new challenges emerge, the leading role of the trade unions and trade organisations, I think, naturally have to grow with these new challenges – because those cannot be addressed locally and differently in an industry that is very standardised, and has to be very standardised in order to be the network that it is.”

Standardisation is absolutely key in another of the major issues ACI must address: security.

“If you think a few years back, we didn’t have the security challenges that today are put upon airports,” Eurnekian says. “The response to those security challenges together with the growth in demand and pressure on infrastructure, all of that can only work if there is a common-sense solution that has all of the stakeholders in mind when the policy is created.”

Initiatives such as the Smart Security programme developed by ACI together with ICAO, which aims to improve passenger screening through the use of new technologies, offers a way for airports to work towards the same standards and goals. Elsewhere, ACI offers professional courses that help to develop what Eurnekian identifies as another of the organisation’s key priorities – environment and sustainability. It is an issue that Eurnekian believes “all organisations that have a leading role in any industry today have to put their focus on”.

The digital revolution, too, is something that ACI must reckon with and leverage.

“I think that it is a challenge that is now on the table, and that all airports and ACI have to work towards taking advantage of what is going on in the world, technology-wise, to really be able to implement it in an industry that is highly regulated,” Eurnekian says.

Immediate challenges, though, are not all Eurnekian is thinking about.

“Is supersonic aviation coming back?” he muses aloud, before moving on to consider the challenges that autonomous or remotely piloted aircraft will pose.

Whatever is around the next corner, ACI World’s governing board chair is determined to make sure the industry meets it with unity and cohesion; ACI will continue to allow airports to consider and strategise together. 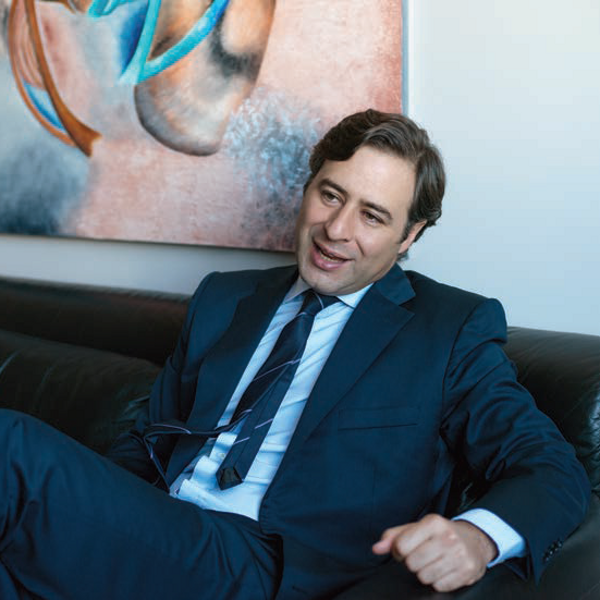 Martin Eurnekian was appointed chair of the ACI World governing board in December 2018.
Post to: