A star is born

Covering more than 7.5 million square feet and capable of hosting up to 72 million travellers annually, Beijing’s Daxing International is the largest single-structure airport on the planet. Will Moffitt talks to Cristiano Ceccato, project director at Zaha Hadid Architects, about the challenges of building such a large, intricate structure while living up to the design ethos of the practice’s namesake.

In his 1995 essay ‘Non-Places: Introduction to an Anthropology of Supermodernity’, French anthropologist Marc Augé classified the airport as a “non-place”. Like hotel rooms or supermarkets, Augé argued that airports were both transitory and uniform: structures shorn of culture, history and identity created to funnel people from one place to the next as swiftly as possible. In other words, they are places where meaningful interactions go to die. It’s a definition that Cristiano Ceccato, project director at Zaha Hadid Architects, quickly refutes. While it’s true that certain facets of the airport experience can deaden the soul – “a lot of arrivals experiences are quite bleak,” he admits – they can also be profoundly engaging and democratic spaces. Ceccato recalls going through Heathrow Airport as a six-year-old with his mother and, among other things, seeing Sikhs wearing turbans for the first time. The experience made a lasting impression. “It was eye opening: I saw Asian people, Indian people, black people,” Ceccato says. “It opened my eyes to a world that is non-judgmental in terms of politics or religion.”

A place in history

Contrary to Augé’s pejorative categorising, all three buildings, he says, carry important historical and cultural weight. None more so than Daxing, a structure of huge proportions and profound symbolism that Ceccato worked on with firm founder Zaha Hadid before she passed away in March 2016. One part of Xi Jinping’s ambitious surge to rebuild national infrastructure, alongside the Three Gorges Dam and the country’s sprawling high-speed railway network, Daxing spans 7.5 million square feet and became the world’s largest single-structure airport terminal when it opened in September 2019.

Situated an hour from Beijing Capital International Airport, it is a gateway to the China of tomorrow, designed to alleviate some of the strain being placed on Capital International – already accommodating 205,000 passengers on a daily basis – and showcase the country’s relentless drive to build bigger and better.

With a growing influx of business travellers predicted to flock to the city in the next decade, Daxing is both a necessary upgrade for transport infrastructure and a potent symbol of national intent. By 2025, 72 million passengers should pass through its gates annually.

For Ceccato, this concept of developing a gateway between two worlds – a transitional space for travellers to venture to and from – is an integral part of all airport design, but the unique sensibilities of Chinese culture made that concept a doubly important aspect of Daxing’s design.

“You go through a series of gateways from the Tiananmen Square that start at the outside of Beijing along the north-south axis. They take you right into the most inner sanctum of the Forbidden City, to the political heart of China,” Ceccato explains. “Our airport sits right on that axis and the Chinese people attach a lot of importance to that symbology.” Ceccato drew on other airports for inspiration, most notably Chek Lap Kok International in Hong Kong, a feat of architecture that he has long revered, not least because he lived in the capital for many years and used it extensively.

“The roof isn’t that high, so it feels intimate. There’s lots of carpeting in the terminal, so it feels like a giant living room. When it opened, you could argue it didn’t speak to Chinese culture, but over time, it became part of the fabric of Hong Kong,” Ceccato says. “We tried to do that with Daxing, making it about a particular place so it becomes a microcosm of that location.”

Passengers are expected to pass through Daxing International Airport by 2021.

Daxing, like many of Hadid’s previous creations, has a curved sculptural shape. Nicknamed ‘the starfish’ due to the legs that swirl out from its bronze central core, the terminal is stacked upwards with domestic and international terminals arranged on top of each other, making amenities accessible to all. Echoing principles from traditional Chinese architecture, the airport is modelled around a translucent central ‘courtyard’ that funnels light rays through a series of eight 350ft-wide skylights. Traditional elements of Chinese style are present in the departure lounge, designed in collaboration with contemporary artist Xu Bing, which features pavilions, water features and green pathways.

The end result is a striking structure that wouldn’t look out of place in a science fiction flick, although Ceccato is at pains to stress the functional logic behind every decision. As the field of architecture that he regards as “the most difficult you can do”, airport design is not about being bold for the sake of it. “It’s true that the firm has a particular language that people recognise, but one of the things that we were very clear about when we got involved is that it had to be a highly functional, flexible, performative building,” Ceccato explains. “The sexiest-looking piece of architecture in the world won’t save you if the airport terminal doesn’t do what it needs to do.”

The starfish-like shape, for example, grew out of necessity; specifically created to ensure that the piers were sufficiently spread out, but not so far that it would require a transport vehicle to reach them, as is the case at Beijing’s Capital International Airport. Instead, due to Daxing’s unique shape, passengers can easily access any of the 79 available gates by walking from the airport’s inner atrium to terminals arranged around the five piers. Despite the airport’s vast size, travellers looking to access gates located on its outer edge can walk to them in ten minutes or less. Sufficient quantities of natural light are filtered through the eight skylights, illuminating the paths towards the departure gates and reducing the need for artificial lighting during daytime. Similar energy saving measures are integrated into the fabric of the airport, with a solar farm mounted on the roof of the hangars and cargo areas, along with a rainwater collection facility.

The cost to build Daxing International, while the projects on its periphery attracted investments of around £36.5m.

Meanwhile, the airport’s high-rise design means that departure check-ins and baggage reclaim are stacked one on top of the other, with separate facilities for international and domestic flights. This makes an otherwise gargantuan building more compact, with open spaces at the top imbuing Daxing with an important emotional quality.

“If you’re arriving internationally, you can look up and see this great big space above you, which is quite uplifting after a long trip,” Ceccato explains. “[On the other hand] you can go on the upper balcony overlooking this central space right in the middle of the building and wave goodbye to your loved ones as they proceed through.” Daxing has received positive reviews from the likes of aviation blogger Sam Chui, praised as both a comfortable, well-functioning enterprise and mirror for a culture and country undergoing rapid change. Writing for Architectural Digest, journalist Nick Mafi argued that “it’s the ease of navigation that makes Hadid’s design so special”.

Perhaps the biggest compliment of all came from British Airways (BA), which became the first international airline to confirm it would move all of its operations from Beijing Capital International to Daxing in July 2019, citing its ability to host a “world-class experience” as a significant factor behind the move.

Since then, BA has enjoyed a fruitful relationship with Daxing International, ferrying a steady stream of flights to Beijing from London Heathrow, although in the wake of the disruption caused by Covid-19 it has stopped operating the route for the time being.

“When BA decided to relocate its operations to Daxing, it was a huge vote of confidence, because it was a foreign airline that had a choice of where to be and they were very proud to make that move,” Ceccato says. “We definitely felt that it was an endorsement of the work that we had done.”

Effect of the pandemic

With the fallout from Covid-19 drastically disrupting airports and the aviation business, it seems natural that measures to detect and stifle the continuing spread of the pandemic – such as screening – will inform facets of terminal design in the future, helping airports face similar threats. It’s a trend that Ceccato is already witnessing as he works from his London home, speaking with clients in Australia about design briefs for a new terminal at Western Sydney Airport. With plans for the building at a very advanced phase and official health protocols on how airports should combat the virus yet to be decided, it’s a tricky scenario for any architect to navigate.

“People are still catching their breath about what’s happened and agreeing international protocols on health screening around the world, so that still has some way to go,” Ceccato explains. “I think there will be changes. I think part of it will have to do with whether screening technology is available that can detect pathogens in a much faster way. There might be the need for a health passport or an app that explains where you’ve travelled to and from. I think people will be walking around with masks a lot more.”

As the chaos and disruption continues elsewhere, and the interview draws to a close, one can’t help wondering what Hadid would have made of the final design for Daxing International. Would she have been content with the end product? “The building speaks for itself. And I think she’d be very proud. Zaha was a big patron of BA, she really loved them,” Ceccato concludes. “It’s a shame she couldn’t be on that first flight to Daxing. We missed her there. But I think it does justice to her legacy.” 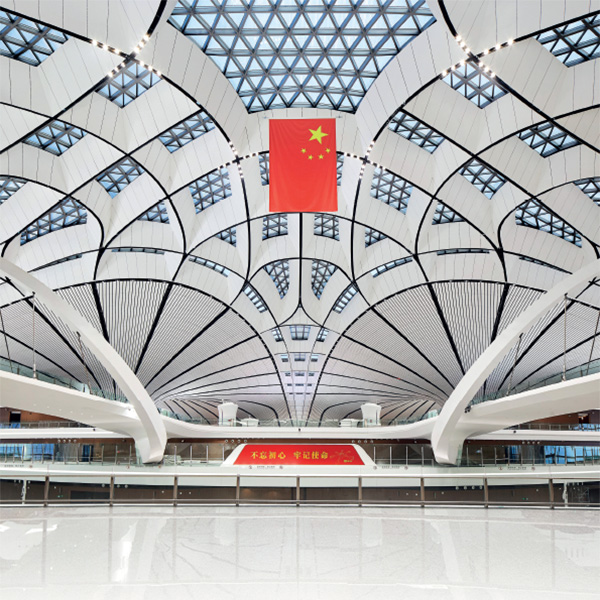 Echoing traditional Chinese architecture, the airport is centered around a translucent ‘courtyard’ that funnels light through a series of eight 350ft-wide skylights. 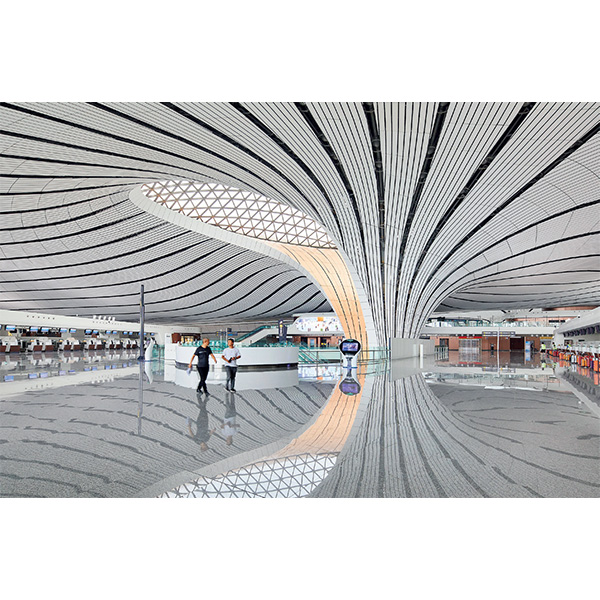 Daxing, like many of Hadid’s previous creations, has a curved sculptural shape. 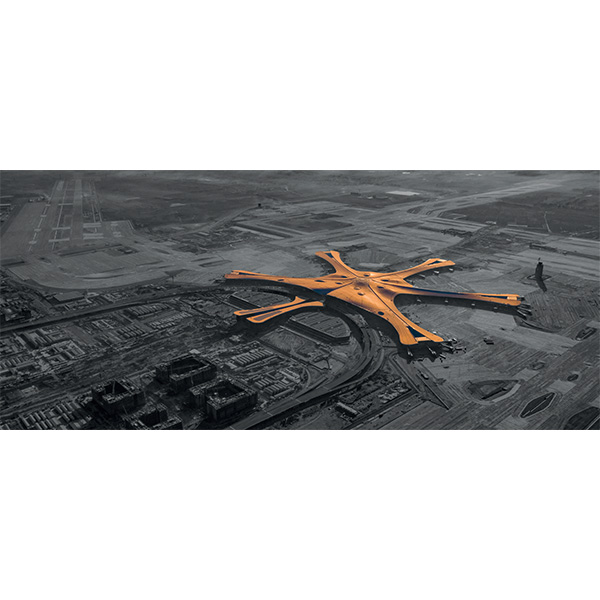 Due to Daxing International Airport’s starfish-like shape, passengers can easily get to their gates walking from the airport’s inner atrium to terminals arranged around the five piers.
Post to: