A reflection of its community

From religion to dance and music, the Brazilian state of Bahia is home to a uniquely vibrant culture. As of October 2019, it now has a newly renovated airport, Salvador Bahia, with a design that truly mirrors the region it serves, as its chief technical officer, Yann Le Bihan, tells Ross Davies.

In February and March of 1927, Rudyard Kipling and his wife, Caroline Balestier, ventured across Brazil. Along the way, the writer wrote numerous letters to newspapers back home in the UK, detailing the couple’s experiences on the road.

Kipling’s peregrinations reached the coastline of Bahia, which he likened to “the hearth of all that flaming energy when Brazil was being born”. As complicated as his legacy might be for many – mainly concerning his disposition towards colonial imperialism – Kipling’s description of the northeastern state still feels apt.

Salvador, Bahia’s largest city, was Brazil’s first capital between 1549 and 1763, and its port alive with the comings and goings of traders (mainly in gold and diamonds), explorers and immigrants. During this period, the transatlantic slave trade was also rampant, in which millions of African slaves were taken from European colonies to the New World.

Contemporary Bahia is a living reflection of its colourful past. From the widespread worship of Yoruba gods (which originated in Nigeria) to the practice of the dance-turned-martial art capoeira, the coastal state has a distinctly Afro-Brazilian heritage. Writing in the New York Times in 2019, travel writer Seth Kugel said that Carnival in Salvador makes “Rio’s version looks like teatime at Buckingham Palace”.

So, when work began in 2018 on the renovation of the main terminal at Salvador-Deputado Luís Eduardo Magalhães International Airport, the leitmotif of the design brief presented to local architects by operator VINCI Airports was clear: the project needed to reflect Bahia’s cultural identity.

Part of the community

Successfully hitting a tight 18-month deadline, the project was delivered to the public in October 2019. Amounting to a total investment of $160m, including an expansion of 22,000km2 of its main terminal to accommodate new restaurants, shops and other businesses, the new Salvador Bahia Airport is something “local people can be proud of”, says the airport’s chief technical officer, Yann Le Bihan.

“We wanted to avoid stereotypes. So, while there are hammocks, they aren’t like regular hammocks, as they represent part of the culture here – the fishermen’s boats. This is about the value of the culture, art and hospitality, which local people take great pride in.”

VINCI, one of the world’s largest airport operators, took over the reins of Salvador Bahia Airport in 2017 after signing a 30-year concession agreement with Brazil’s state-run National Civil Aviation Agency (ANAC). Situated 24km out of Salvador, the hub handled over 7.7 million passengers in 2017, making it Brazil’s tenth busiest airport.

When it came to the interior design concept, Frenchman Le Bihan – who arrived in Brazil in 2017 after three years overseeing VINCI’s infrastructure in the Dominican Republic – admits he was unaware of what “typical Bahian culture and design” looked like. This contributed to the decision to bring in local designer on to the project, including Paula Maia and several other architects from Thais Abreu Arquitetura.

Arguably the pièce de résistance of Salvador Bahia 2.0 is Dendezeiros Square, the first space passengers encounter after disembarkation. Wood is the dominant organic feature here – the area’s flooring, pillars and seating are all made from locally sourced timber, as well as a tunnel constructed entirely out of bamboo. On the surface, Dendezeiros Square is unapologetically tropical in design and feel, yet its aesthetics owe much to the abstract – for instance, its ovoid-shaped benches are meant to represent the fishing boats found at the nearby All Saints Bay. Elsewhere, a new specifically designed skyline panel that adorns the corridor linking to the airport’s new pier, includes images of some of Bahia’s most important landmarks, among them Barra’s Lighthouse and Salvador’s Rio Branco Palace, one of Brazil’s oldest palaces and a Unesco World Heritage site.

Thus, the design goes beyond the simple sun-andsand image that might easily be attributed to Bahia, says Le Bihan.

“We wanted to avoid stereotypes,” he says. “So, while there are hammocks, they aren’t like regular hammocks, as they represent part of the culture here – the fishermen’s boats. This is about the value of the culture, art and hospitality, which local people take great pride in.”

The maximum passenger capacity envisaged for Salvador Bahia Airport by VINCI and the Brazilian government.

There’s that word again: pride. This touches upon Brazil’s regional divide between its traditionally rural north and the country’s southern states, which include the megalopolises of Rio de Janeiro and São Paulo.

Beyond the “multi-sensory experience” afforded to passengers, the renovations undertaken at Salvador Bahia Airport were environmentally driven, stresses Le Bihan. Following the construction of a waste water plant, “100% of water is now reused on-site”. A solar farm has also been built, which supplies energy to the terminal – making it the first airport in Brazil to do so – while its lighting is completely LED-powered.

In a country with one of the highest deforestation rates in the world – the felling of trees in the Amazon rainforest is reported to be at its highest rate in a decade – the concession was also careful to source its wood fittings from trusted sources, adds Le Bihan. “Given the current issues around wood in Brazil, I’d like to be clear that all the wood found in the airport is legally sourced.”

Aside from the new interior design and terminal expansion, the project also included the building of a new jetty – featuring six boarding gates – as well as an overhaul of its existing runways. Hoping to improve the operational experience for passengers, VINCI has also invested in new check-in counters, an up-to-date baggage-handling system and the delivery of free broadband across the airport. As with any major airport renovation project, VINCI faced the delicate balancing act of ensuring construction works stayed on schedule while minimising disruption to passenger flows and overall airport activity. “That was the biggest challenge,” says Le Bihan. “We couldn’t just close the airport. But we managed to work around it.”

The response to the modernisation of Salvador Bahia Airport has been roundly positive. ANAC recently named it Brazil’s most sustainable hub, while it has also been recognised as a “green airport” by Airports Council International – Latin America and the Caribbean. Le Bihan has also been encouraged by the favourable reaction of passengers on social media. “There has been lots of stuff on Twitter and Instagram, which has been really nice,” he says.

The global ranking of Salvador Bahia Airport in a survey on airport quality.

In spite of its relatively new role as operator, VINCI was also quick to appreciate some of the pre-existing qualities of the airport it inherited. In a 2019 list compiled by passenger rights company AirHelp, Salvador Bahia Airport was ranked as the 32nd best airport in the world (out of 132), based on social media feedback, passenger reviews and on-time performance. This suggests a respectable baseline from which VINCI was able to work. The operator was therefore careful not to renovate the terminal to the point of being unrecognisable from what already stood before, but rather for it to speak to the old as much as the new.

“We wanted there to be a unifying theme, through which people – who might have used the airport before – are reminded that they are in the same space, even if the architecture is now a little different,” says Le Bihan. “This means people aren’t likely to feel lost.

“In the past, we’ve seen airports in Brazil build really nice new terminals, but they don’t speak to the former terminal. So, while you are actually in, say, São Paulo, you might as well be in Hong Kong, Bangkok or Paris. We didn’t want to do this.”

Forming a central plank of its contract with the Brazilian government, VINCI aims to increase Salvador Bahia Airport’s capacity from its current eight million passengers per year to 15 million. To facilitate the uptick, several new routes have opened in the past two years, including flights to Miami, Panama and Santiago de Chile.

“We wanted there to be a unifying theme, through which people – who might have used the airport before – are reminded that they are in the same space, even if the architecture is now a little different.”

Despite the open-for-business stance of Brazil’s current government, the current coronavirus pandemic means Salvador Bahia Airport is unlikely to meet its passenger increase targets this year. While it has remained open in recent months, it has done so at a reduced capacity.

Accepting it may take “some time”, Le Bihan, however, is confident that the airport will welcome 15 million passengers a year in the near future, and stand as a vital gateway to a vibrant region. 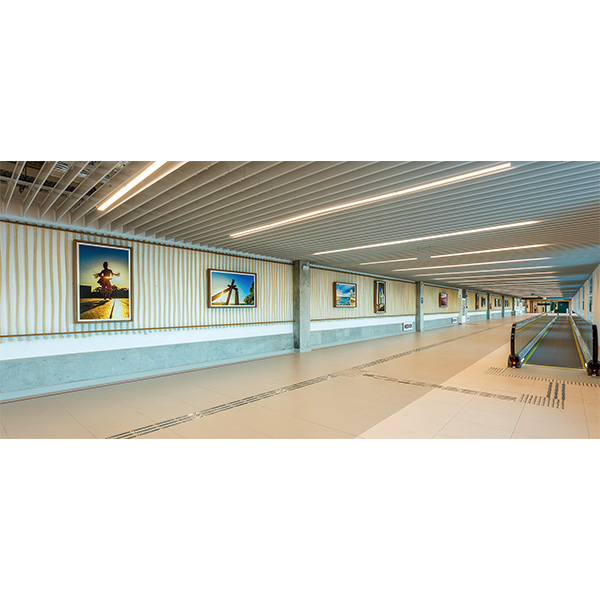 The project also included the building of a new jetty – featuring six boarding gates – as well as an overhaul of the existing runways. 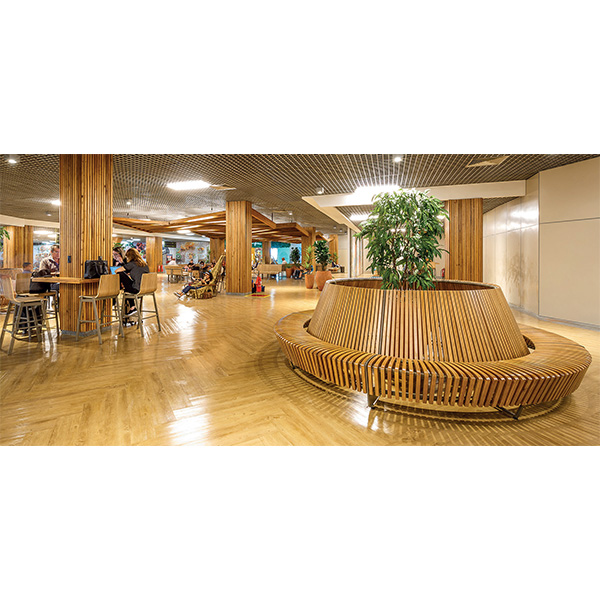 Dendezeiros Square, Salvador Bahia Airport – the elliptical benches are meant to represent the fishing boats found nearby at All Saints Bay. 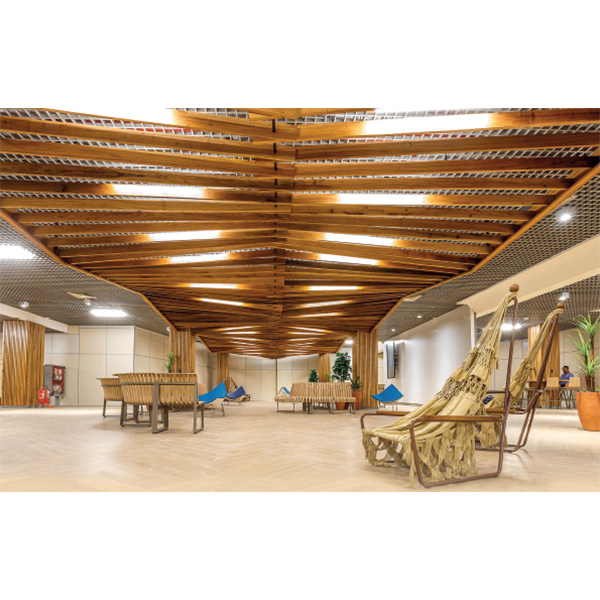 the area’s flooring, pillars and seating are all made from locally sourced timber.
Post to: