A force of nature

Day-to-day airport operations provide enough challenges, but in some locations this is complicated further by extreme forms of weather that cause earthquakes and flooding. As the effects of global warming cause temperatures to soar and water levels to rise, some airports look increasingly vulnerable. Will Moffitt speaks to Angela Gittens, director general at Airports Council International (ACI World), and Doug Yakel of San Francisco International to discuss the plans in place to manage extreme weather.

It took two days for a tropical depression near the Marshall Islands to become something that, on satellite photos, resembled a swirling, all-consuming eye. Early on 29 August 2018, the Japanese Meteorological Agency upgraded this gathering storm to a typhoon as it surpassed the 74mph benchmark.

Five days later, typhoon Jebi hit the Kansai region, a densely populated industrial heartland in southern Japan, leaving a trail of devastation in its wake. With wind speeds measuring up to 103mph, it ripped through Osaka’s infrastructure, killing at least 11 people and injuring 700 others.

Situated on a human-made island in Osaka Bay, two small strips on an open waterfront, Kansai International was powerless; its runways hit by surging water that flooded some of its aircraft up to their engines. Almost 800 flights were cancelled, while more than 3,000 passengers were left stranded as brutal winds smashed a 2,591t tanker into a bridge connecting the airport to the mainland.

Reeling in the wake of the most destructive typhoon to hit the country in a quarter of a century, Japan is now seeking to rebuild and to do it smarter.

7in
Scientific data suggests that the San Francisco Bay has risen 7in since 1900. Data also suggests that it will rise 3ft more by 2100.
OEHHA/Baykeeper

An important part of this process will be safeguarding its transport infrastructure from harm, including Kansai International, but given that its runways reside 3.4m above sea level – and a giant seawall would prevent aircraft from landing and leaving – protecting Japan’s third-busiest airport remains a difficult task.

This restructuring effort parallels those being made by nations around the globe; a calibrated response by airports that have felt the sting of increasingly destructive weather patterns.

For Angela Gittens, director general at Airports Council International (ACI World), rising temperatures and swelling oceans mean that preparing for the effects of extreme weather is now increasingly vital for the aviation industry. “The increasing number of adverse weather events, such as Typhoon Jebi, further highlight the risks of climate change already faced by the airport industry,” Gittens says.

As statistics suggest, extreme weather conditions such as heatwaves, floods, storms and typhoons are disrupting global airport operations at a growing rate. According to Eurocontrol, along with the risk of flooding posed by rising sea levels, aircraft will struggle to take off due to higher temperatures, while frequent and intense storms will make flying less predictable and more turbulent.

One airport working fast to shore up its barricades is San Francisco International. Situated on the edge of the bay, the airport funnels some 55 million passengers a year through its doors.

Despite erecting seawalls, beams and concrete dikes along its base since the 1980s, most of this infrastructure has been designed to guard its perimeters from high waves and rain.

“It’s important that a major airport like ours remains open and functional throughout something of that nature.”

In light of recent studies, however – one of which predicts that half of San Francisco’s runways could be underwater by 2100 – more developed forms of protection are being put in place.

“We’re in the midst of a shoreline protection programme, which is really designed to protect our airport from two possible outcomes,” says Doug Yakel, head of public information. “One is the 100- year flood and then we’re also looking to protect the facilities against [the more general threat of] rising sea levels.”

Since 2011, the airport has been evaluating its weak spots, ironing out inconsistencies that could make it vulnerable in the face of aggressive amounts of water. As Yakel says, while some of these problem spots are harder to see, others are glaringly obvious.

“There are areas of our airport that are right on the bay that do not have any protection,” Yakel says. “We have a coast guard facility on airport grounds, right on the bay that is completely exposed.” There is also a water treatment plant that is currently unprotected. Both are good examples of parts of the facility “that have nothing, [and] that will need something”.

To address these blind spots and shore up the infrastructure as a whole, the airport has invested an estimated $587 million in a concrete sea wall that wraps around its 10 mile perimeter, a move that should provide 8ft of protection.

As Yakel says, it’s a strategy based on scientific data. Reports suggests the bay has risen 7in since 1900, and that it will rise 3ft by 2100.

This move mirrors a broader, citywide effort to better understand the unique climate in which the bay is situated. As Kurtis Alexander in the San Francisco Chronicle puts it, “in an era of climate change, San Francisco wants to know how much worse the weather might get”.

To do this, the city has partnered with the Lawrence Berkley National Laboratory, a climate research organisation that has created data-driven models to help predict local weather patterns.

While these experiments remain just that – hypothetical studies informed by past events and predicted concentrations of greenhouse gases – they will at least make the potential specifications of waves and storms more tangible, enabling San Francisco and its airports to prepare for the worstcase scenario.

“One thing that we really don’t know, is to what extent sea level rise will occur. There are a lot of forecasts out there,” Yakel explains. “We’ve chosen based on the best available science and some guidance from the local councils. Ultimately, we’re building on the assumption that there will be 36in of sea level rise by 2085.”

For Gittens, developing these kinds of partnerships is an essential part of a wider push by the airport community to understand changing climate patterns, enabling airports to develop new initiatives to prepare for future flits and flurries.

“Collaboration is the key to this effort,” Gittens says. “If environmental scientists can help airports and provide advice that can assist them in developing new procedures, then they should take advantage of any opportunity to use this expertise.” Gittens also recommends that airports learn from one another, a move that ACI has sought to foster by releasing a best practice report on the steps being taken by airports to safeguard their infrastructures against extreme weather.

The paper, released in October and titled ‘Airports Resilience and Adaptation to a Changing Climate policy’ says that airports need to “understand the risks and initiate adaptation measures for both existing and new infrastructure, as well as managing critical operations to become more resilient to the changing climate”.

Sitting 3m below sea level, Amsterdam Schiphol is one airport stoically preparing for future threats. With sea levels around it expected to rise by as much as 100cm by 2100, Schiphol has created a 240km-long network of drainage structures, alongside a more sophisticated pumping system to filter out large volumes of water.

One aspect of climate protection the report doesn’t mention is building structures that are earthquake-proof. Sitting tentatively on the San Andreas Fault, San Francisco is no stranger to seismic shocks and as Yakel says, an understanding of its vulnerabilities – forged by two fiercely destructive earthquakes – is engrained deep within its psyche.

“It most certainly informs the way that we build our facilities and operate our airport,” Yakel says. “We are building them to the very latest seismic specifications. We actually just opened a traffic control tower that is built on a vertical post tension structure, which allows it to remain functional through a magnitude 8.0 earthquake.”

Given that San Francisco International would play a major role in providing aid and resources in the event of another major earthquake, it’s crucial that these structures can weather the brunt of these effects. “It’s important that a major airport like ours remains open and functional throughout something of that nature,” Yakel says.

Going forward, this focus on the wider community is a vital reference point for San Francisco International. Ultimately, as Yakel says, it is a facility that thousands of local people rely on.

“The increasing number of adverse weather events, such as Typhoon Jebi, further highlight the risks of climate change already faced by the airport industry.”

“We look at our airport as a critical piece of infrastructure to the San Francisco Bay Area,” Yakel says. “All of the jobs and revenues, all of the supplies of goods and services that our airport facilitates, support the larger economy of our region, and we need to protect it.”

If current estimates are anything to go by, the time to act is now. Airports that move swiftly and efficiently, investing in new resources while tweaking older structures, stand a better chance of surviving an increasingly unpredictable climate. Perhaps Yakel’s closing contribution is a good motto to abide by. “We’re not entirely certain what is coming, but we’re preparing for the worst”. 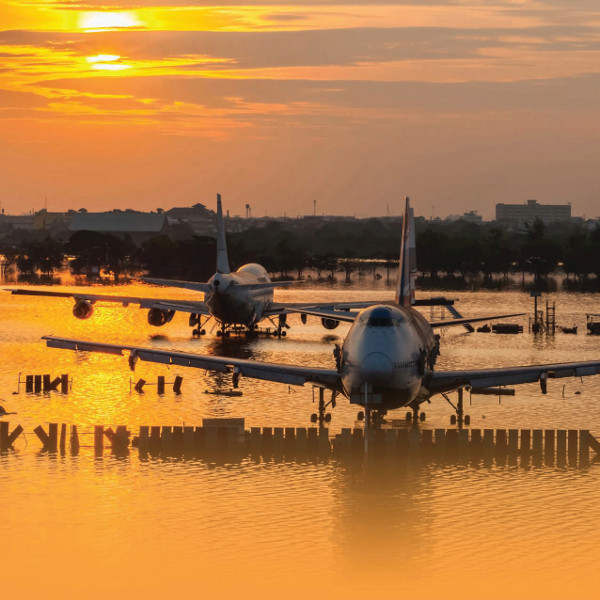 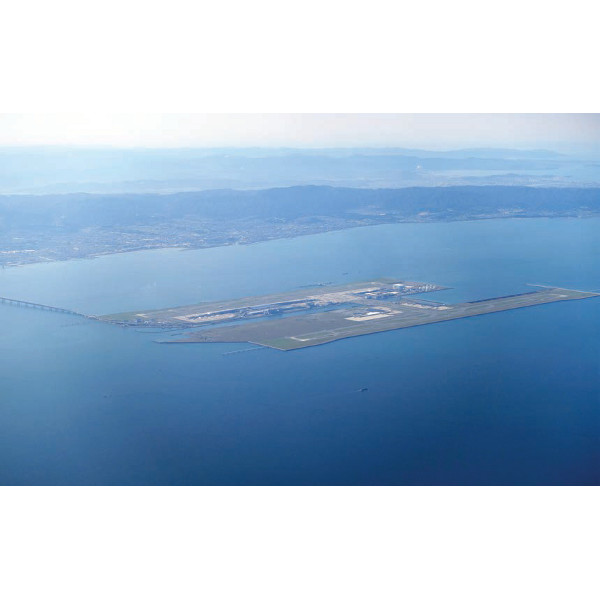 Kansai International Airport (KIX) after the typhoon-fed flooding and the bridge accident.
Post to: